Could re-election of foul-mouthed Mayor Fouts be a harbinger for Trump's second term?

Suburban Detroit's Macomb County is famously regarded as a bellwether for politics. So the re-election of Mayor Jim Fouts for a fourth term on Tuesday in the county's city of Warren should give pause to people hoping for Donald Trump to be a one-term president.

Fouts won by 57.5 percent of the vote against former City Councilwoman Kelly Colegio, according to an unofficial total. That's despite a string of racist, sexist, and otherwise downright disgusting comments from the 77-year-old mayor caught on audio recordings in recent years.

He's compared Black people to "chimps," called older women "dried-up cunts," said he'd like to abuse "an abused woman," mocked people with disabilities, and talked about the ease of picking up child prostitutes in Amsterdam. Most recently, a recording surfaced in which Fouts said he'd like to shoot his former chief of staff "through the fucking head."

"I could easily get a gun and shoot Henry," Fouts allegedly said. "I’d enjoy shooting him."

The comment echoes an infamous declaration made by Trump during the 2016 campaign.

"I could stand in the middle of 5th Avenue and shoot somebody and I wouldn't lose voters," Trump said.

The comments also call to mind the Access Hollywood tape that leaked in the 11th hour of the 2016 campaign in which Trump was caught boasting that he could grab women "by the pussy."

And like Trump is wont to do, Fouts has dismissed the recordings of him as fake news — without providing any sort of backing evidence.

Fouts told The Detroit Free Press that among the reasons he sought re-election was to offer new programs for Warren's aging senior population, as well as the construction of various large-scale projects in the city, including a downtown development and a basin to reduce flooding. Warren voters appear to believe Fouts is serving them, despite his myriad scandals. It could be that voters across the country feel the same about Trump.

Or not. In many ways, the "blue wave" of 2018 appeared to be continuing on Tuesday, flipping the state of Virginia fully Democratic for the first time in 26 years and giving Kentucky a Democratic governor. Suburbs in Pennsylvania, another battleground state, also turned blue.

A recent Washington Post poll found that the 2020 Democratic presidential candidates were beating Trump by "virtually unprecedented" margins, but a New York Times poll found Trump could once again lose the popular vote and still eke out a narrow win in the Electoral College. 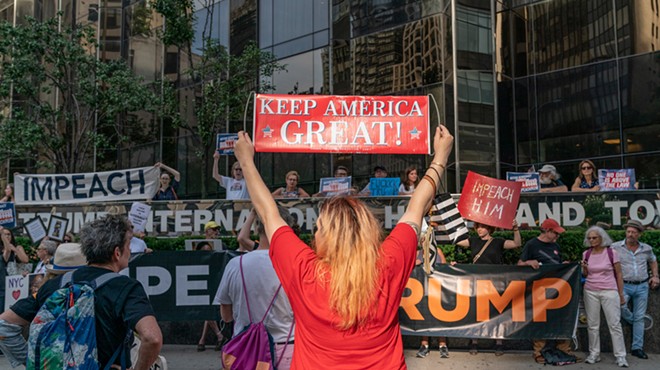