Cobo Center, named after a racist mayor, could soon be renamed 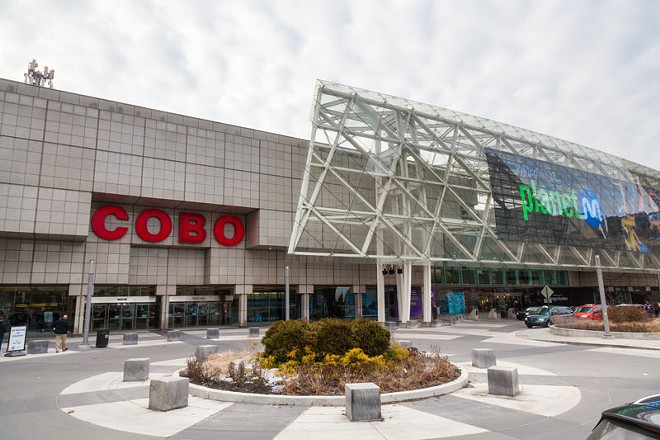 The Detroit News reports that Detroit Regional Convention Facility Authority is in the final stages of negotiating a seven-figure naming rights deal for the convention center, with Cobo's general manager telling the paper they are in the "nitty-gritty of just finalizing the deal." No timeline for the name-change was offered, nor were any potential buyers, though it was reported that the contract with Cobo's managing company SMG expires in 2022.

Republican Albert Cobo, Detroit's mayor from 1950-57, is remembered for a legacy of upholding racial segregation. Campaigning against the “Negro Invasion” of white neighborhoods, Cobo advocated for policies that restricted housing for African-Americans, and under Cobo, the construction of highways decimated historic Detroit African-American communities Black Bottom and Paradise Valley in 1956.

The talks come amid a national movement to rename and remove Confederate monuments following a violent clash over a statue of Robert E. Lee in Charlottesville, Virginia in 2017. However, Detroit Mayor Mike Duggan chief of staff Alexis Wiley previously said Duggan had been considering renaming Cobo Center before the Charlottesville riot.

Of course, we don't have monuments to the Confederacy in Detroit — aside from certain Confederate-flag-waving idiots, that is — but there are other controversial monuments that have come under fire in recent years. Those include statues of former Dearborn Mayor Orville Hubbard, which now has a plaque labeling him as a racist, and Christopher Columbus in downtown Detroit, which was vandalized on a recent Columbus Day. Chene Park, named after slaveowner Charles Chene, was renamed after singer and civil rights icon Aretha Franklin following the Queen of Soul's death earlier this year.

In a Free Press column, Rochelle Riley argued Cobo Center should be renamed after boxer Joe Louis, given that the nearby Joe Louis Arena is set for demolition following the Red Wings' move to Little Caesars Arena. However, given the pricey naming rights deal, it seems more likely Cobo Center will be renamed for a corporation instead — like the Red Wings' new pizza palace, Ford Field, Comerica Park, or the QLine streetcar, named after Quicken Loans.