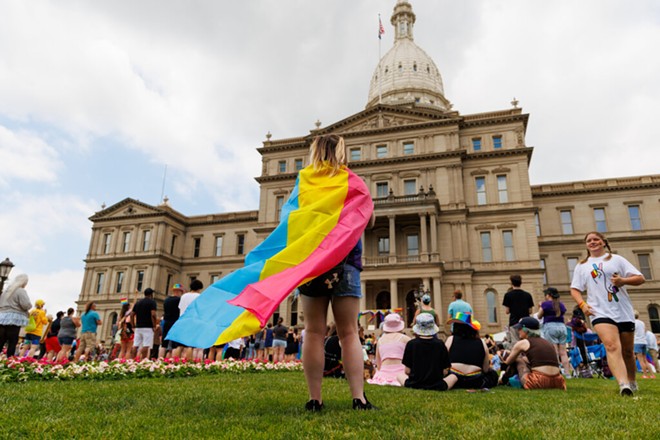 Andrew Roth / Michigan Advance
The Michigan Pride rally at the state Capitol in Lansing on June 26, 2022.

The tone at the Michigan Capitol in Lansing was as defiant as it was celebratory, with more than 200 members and allies of the LGBTQ+ community gathering Sunday for a Pride rally on the seventh anniversary of the U.S. Supreme Court legalizing same-sex marriage.

The event — the first in-person Pride at the Capitol since 2019 — took place in the face of a renewed right-wing push against LGBTQ+ rights, the likes of which has not been seen in years, and on the heels of a Supreme Court ruling that on Friday toppled the landmark Roe v. Wade decision on abortion rights.

For state Rep. Laurie Pohutsky (D-Livonia), this year’s Pride was a “bittersweet” one.

Standing on the sidewalk to collect signatures for the Reproductive Freedom for All ballot measure, which seeks to enshrine abortion rights in Michigan, Pohutsky told the Advance that the combination of having in-person Pride again in addition to the uptick of threats against the LGBTQ+ community harkens back to the movement’s rebellious roots.

“It’s been a weird kind of affirming thing because, honestly, when you look at the history and the roots of Pride, I’ve been very privileged,” Pohutsky said, noting that she came out during a time when Pride was more celebratory and LGBTQ+ rights were being expanded.

“It’s bittersweet, but also kind of a validating and affirming experience to be looking at it as, again, kind of a rebellion and pushing back on a lot of legislation that we’ve seen lately,” she said.

As many speakers at Sunday’s event noted, Pride began “as a riot” with resistance against a June 28, 1969 police raid at the Stonewall Inn in Lower Manhattan, New York. Commemoratory events reflective of that day in the years following morphed into the present-day Pride celebrations that are held in cities across the country during the month of June.

Planned Parenthood had a table by the Capitol steps, and numerous attendees carried clipboards to promote petitions in support of abortion rights, voting rights and Attorney General Dana Nessel.

Nessel is running against Republican attorney Matthew DePerno in her bid for re-election. She is Michigan’s first openly LGBTQ+ person to be elected to statewide office, and has consistently championed the community’s causes, while DePerno has espoused anti-LGBTQ+ positions.

Despite the Supreme Court’s decision on Friday, abortion currently remains legal in Michigan. A 1931 state law which makes abortion a felony would have sprung immediately into effect on Friday if not for a court’s temporary halt on the law.

Court of Claims Judge Elizabeth Gleicher granted a preliminary injunction to block the 1931 ban in a suit filed by Planned Parenthood. Nessel has repeatedly pledged to not enforce the law if or when it does come back into effect.

Nessel has also expressed concern that, with the toppling of Roe, federal protections for same-sex marriage and contraceptive rights are also in danger of being overturned.

Sunday’s gathering was held in the wake of U.S. Supreme Court Justice Clarence Thomas writing in his concurring opinion in Dobbs vs. Jackson Women’s Health Organization, which overturned Roe v. Wade, that the court “should reconsider” its past rulings codifying rights to same-sex marriage and contraception access.

The first major LGBTQ+ event in the city welcomed 2,500 Michiganders to the capital on June 25, 1989. Since then, pride celebrations have increasingly become mainstays in other Michigan cities like Grand Rapids, Detroit and Kalamazoo.

Speakers at Sunday’s event, including a trans high school sophomore, stressed the importance of staying true to one’s identity in the face of adversity.

The LGBTQ+ community is facing a coordinated legislative pushback on gay and transgender rights. GOP lawmakers in Michigan and beyond have introduced anti-trans bills, equated LGBTQ+ people with pedophiles and more while refusing to expand protections for members of the community.

In the GOP-led Michigan Legislature, the House opted for a Pride Week rather than a Pride Month, while the Senate did not allow a Pride resolution to pass at all.