Can Bill Schuette be beaten? 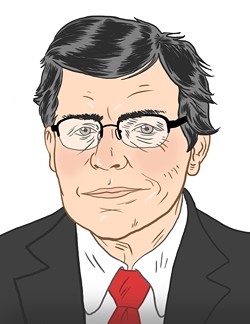 Regardless of what you think of the same-sex marriage issue, Michigan Attorney General Bill Schuette made a horse’s ass of himself in federal court this month.

Don’t just take my word for it; look at what the officially independent and moderate Detroit Free Press said after the historic ruling striking down Michigan’s gay marriage ban.

They called it “a humiliating defeat for Michigan Attorney General Bill Schuette, who squandered hundreds of thousands of taxpayer dollars to mount a pathetic legal defense that demeaned his office and disserved his constituents.”

That was echoed in the ruling by U.S. District Judge Bernard Friedman, who wrote that the “expert witnesses” offered by the state “represent a fringe viewpoint that is rejected by the vast majority of their colleagues across a variety of social science fields.” That was actually being kind to those bozos, and presumably doesn’t include the one state witness the judge dismissed from the witness stand after finding that he had no qualifications whatsoever as an expert in the case.

Now, there indeed was a reasonable and intellectually sound argument that could be made against legalizing same-sex marriage. And that is the fact that in 2004, Michigan voters overwhelmingly amended the state constitution to forbid any marriage that wasn’t between a man and a woman.

Schuette, a 60-year-old former congressman from Midland, could indeed have found respectable constitutional scholars to argue that case, and could have done so with dignity, not to mention less expensively for the taxpayers.

But he seemed so hell-bent on pandering to the far right that the public interest was anything but first on his agenda.

This shouldn’t have been a surprise to anyone; this is the guy who, when he was in the state senate in 1995, successfully sponsored a law making big pharmaceutical companies immune from lawsuits if one of their products kills someone.

Our attorney general has fought against giving poor Michigan families tax credits to pay for their health insurance.

Not only did he fight the Affordable Care Act, he supported the successful efforts of the yahoos in the legislature to refuse to create a state registry to help people find health care, even though that cost us millions, and it meant the federal government would do it anyway, and send us the bill.

This year, Schuette is running for a second four-year term as Michigan’s top attorney. If he wins, you can expect him to devote his second term mainly to running for governor four years from now. Does he deserve re-election?

My guess is that you know the answer.

Yet the conventional wisdom is that he will win easily. It has been well over half a century since any Michigan attorney general was defeated for re-election.

Schuette will have all the special interest money he can spend. But he’s going to face an interesting challenger who has a sterling background, education, and a novel idea:

Michigan’s attorney general should be primarily concerned with protecting all the people from crime.

“Being attorney general is my dream job,” Mark Totten told me over lunch last week. Over the years, he has seen Michigan’s Consumer Protection Act gutted by the courts; seen families devastated by violent crime and white-collar crime.

And what he wants most of all, practically, intellectually and philosophically, is to do something about it. You might never find another candidate with his credentials.

His big dilemma after college was whether to get a Ph.D. in ethics or a law degree. So he got both — at the same time — from Yale, one of the most exclusive universities in the world. Obviously, he doesn’t have an average mind.

Nor is Totten your average Democrat. He grew up in a single-parent home in Kalamazoo, where his mother was a teacher and his family was staunchly Republican.

Republican — and Baptist. Totten, who just turned 40, thought as a teenager that he might want to be a Baptist preacher. He enrolled in a tiny Christian college in Ohio, but the more he learned, “the more I learned that where the Republican Party is today doesn’t represent my values.”

Personally, he seems to be as straight an arrow as they come. His wife, Kristin, is also an attorney, who specializes in trying to protect the rights of children with disabilities.

They have two picture-perfect tiny kids, Grace, 6 and Jake, 5, and their idea of a wild and crazy time is going to church on Sunday and going for a long family hike.

Indeed, Totten, who runs every day, looks like eating a few extra donuts while campaigning with the cops might actually be good for him. But what really seems to float his boat is putting away the bad guys. After getting his two degrees, Totten clerked for a judge on the federal court of appeals, and then worked for a year as an assistant federal prosecutor with the justice department in Washington, D.C.

There, he fought child pornographers and predatory mortgage lenders. He is especially proud of the work he did to help put away one Timothy Sims, a charming individual from Grand Rapids, who, in addition to being a child pornographer, told a woman friend he wanted to perform sex acts on a child.

Totten missed Michigan, however, and came home six years ago, to take a job as a professor at Michigan State University College of Law (the old Detroit College of Law.)

Being the overachiever that he is, he also continued until recently to serve as a volunteer federal prosecutor here, and took a seat on the Kalamazoo School Board.

He found, however, that Michigan had changed — and the attorney general’s office had changed radically.

Totten had grown up under Frank Kelley, the longest-serving attorney general in American history, who had established environmental and consumer protection divisions.

But since Kelley left in 1999, a succession of followers had politicized the office and sought to use it as a steppingstone to becoming governor. “I want to return it to what it once was,” Totten told me. “This race is about giving Michigan an attorney general who protects people and never lets politics get in the way.”

The odds are against him. Totten is certain to win the Democratic nomination at his party’s convention this summer.

But Schuette spent at least $2 million to get elected four years ago, and can easily get more. Totten has raised maybe $175,000. But polls don’t show a lot of love for the incumbent.

Ten years ago, nobody in America could have dreamed their next president would be a guy who was then a black state senator with an African name. They’ve elected him twice since.

Given all that, it’s hard not to feel that if anybody pays attention, Totten’s campaign may not be so hopeless.

I’m surprised that those who love conspiracy theories haven’t figured this one out. From the start, it’s been clear it was taken by an alien spaceship, sucked out of the sky by a giant tractor beam. (I saw this once on Star Trek.)

They may eventually plant some wreckage to throw searchers off the scent, but that’s what happened. My main claim to fame is that I even know why they did this:

Jimmy Hoffa has been lonely.