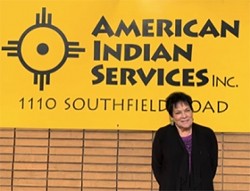 Comprised of Indigenous staff and board of directors, the Lincoln Park-located nonprofit provided culturally appropriate health and wellness services, as well as counseling, case management, diabetes prevention, after school and summer youth programs, and a food pantry program that fed upward of 6,000 Indigenous people each year among the 50,000 Native Americans located in Southeastern Michigan.

Director Fay Givens says the pandemic has “decimated” AIS's youth program, which, when coupled with years of exponential budget cuts, has sealed the fate for the nonprofit.

“The financial situation at American Indian Services is a result of budget cuts from the State as well as the Detroit Wayne Integrated Health Network amounting to 67% in six years,” Givens tells Metro Times. “In spite of the fact that the Federal Government reimburses the state for 100% of the costs of Medicaid services for American Indians, they have starved us out.”

As AIS prepares for closure, Givens has been referring people to seek care at nearby nonprofit Lincoln Park's Community Care Services, a mental health, substance abuse, and wellness center that offers care not specifically designed for the Indigenous community. There's also the American Indian and Family Services in Detroit, but Givens says they've stopped exclusively serving the American Indians. She's concerned that people will not receive the care they need and, more distressing, that it could endanger their well being and family. Many, she says, will not seek out care.

“Our people are afraid that if they go in somewhere and admit they don’t have food, someone will call child protective services and take the kids away,” Givens told Bridge Magazine. “There’s a lack of trust.”

She cites the nation's history of assimilationist policies, including those that lead to government-run American Indian boarding schools, which aimed to remove Indigenous children and youth from the reservations and their families to acclimate them to mainstream American life by stripping them of their language, traditions, and cultural identity, as one of many reasons there is distrust in the community.

At least one-third of Indigenous children were removed from their households as recently as a generation ago. Many children alleged physical and sexual abuse while attending these schools and with their housing placements with white families. The 100-year long practice ended in 1978 when the Indian Child Welfare Act was passed, which allowed Indigenous tribal governments “exclusive jurisdiction over children who reside on, or are, domiciled on a reservation.”

But, as Givens says, it will never be enough. She says the government does not care about preserving the rights of Indigenous people, let alone offer support to the nearly 600 tribes in the U.S., 300 of which are represented in Wayne County.

“We scare them,” she says of the U.S. Government. “We have a different cultural value system. We could care less about wealth. They can't buy us.”

However, Givens says Native Americans are the poorest people in the country and “always have been.”

Givens says there was no way AIS could stay open. Several years ago, she had to reduce operations from 5 days down to 4 because they couldn't pay staff for 5 days of work. She says that in previous years, they've been allotted $100,000 in operational funding, with more than $48,000 going toward insurance-related costs, leaving just $52,000 for salaries and additional programming. In the past, she has gone as far as to sacrifice her paycheck to keep things running but ultimately the choice to pull the plug came down to practicality and respect.

“We can't survive if you can't pay people,” Givens says.

Before the pandemic, she contacted several Detroit-based organizations and foundations looking for funding opportunities to keep AIS afloat. Not only was she rejected, but Givens also says she didn't receive a single response, adding that American Indians often receive as little as 1/5 of 1% of available funding.

There is a ray of hope, however, as Givens says that AIS is not being dissolved as an organization, only the outpost and the services it previously offered. She hopes to work with the community to start a Native American art center in Detroit where Indigenous artists could have studio space to work on their creations and display their work. But much of that depends on what funding is made available.

“I'm pissed off,” Givens says about the closure. “It's more than hurt, it's anger. But you have to let that anger go because it's not good for anyone.”

She adds, “We're still here, but we are hanging on by a thread all across the country.”