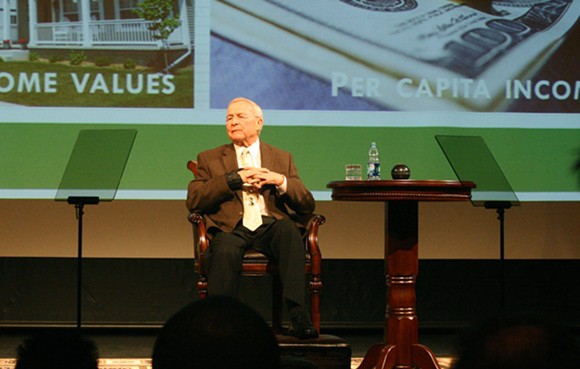 Metro Detroit was aflutter last night when Detroit Free Press reporter Bill Laitner filed a dispatch from a meeting where Oakland County Executive L. Brooks Patterson opened his mouth. Patterson was on-site to talk about Oakland's new tech initiative — a new county brand, or something? — when he said this:

“I’ll fight to keep you here in Oakland County,” Patterson said. “Are you listening Dan? I would be more impressed with Mr. Gilbert’s efforts if he were to bring in high tech companies from Ohio, Indiana and Illinois rather than looking through the fertile vineyards of Oakland County.”


Oakland officials were apparently so pleased by these remarks that they stuck them in a press release for other news outlets to pick up on. It's important, see: Patterson is concerned about downtown Detroit's business moguls poaching companies from north of Eight Mile. After decades of watching businesses flee Detroit for the suburbs, it appears that trend is beginning to reverse.

That scares Brooks. So he said something, and he wanted Dan Gilbert, founder of Quicken Loans and keeper of lots of money, to hear him.

Gilbert said in a statement that "I would actually be more impressed if Brooks had gotten his facts correct. Of the more than 120 technology companies that have opened shop in SE Michigan's leading high-tech corridor along Woodward in downtown Detroit, more than 100 of them were launched right in the heart of the region's urban core.

"However, we did recently 'woo' a large financial institution's regional HQ from the 'fertile vineyards of Oakland County,' " Gilbert added. "In all seriousness, it would be much more productive if we could all work together to grow the region and state, leaving the divisive politics of the past in the past where they belong. Are you listening, Brooks?"


Patterson's paranoia comes as no surprise. This sort of entrenched sentiment has been brewing over the last couple of years. As I wrote for Jalopnik last year, Macomb County lost its mind when ad agency Campbell-Ewald decided to ditch the plain Macomb landscape for some space in downtown Detroit. It's easy to imagine the creative minds at Campbell-Ewald are now feeding more off of downtown's synergy than they were while situated on Earle Memorial Highway.

That decision last year also prompted one writer to declare that metro Detroit's suburbs need a full-throttled defense strategy to prevent this kind of thing from continuing to happen. Because, really, haven't you noticed how well our feudal system of municipalities works in metro Detroit? Hello!

There are good reasons to argue in support of regionalism. And, it's OK for Warren to be Warren, as Jeff Wattrick noted on Deadline Detroit last year — just as it's OK for Oakland County to be what it was likely intended to be in the first place: an area comprised mostly of bedroom communities.

It also makes sense because, as a Federal Reserve Bank of Cleveland study I cited in the Jalopnik piece found, metropolitan regions that have managed to grow over the last three decades have maintained a steady population in its core. Regions with a declining population disproportionately saw losses in its core, which has been the case in metro Detroit. From the Fed study:

"Evidence suggests that denser [metropolitan statistical areas] are more productive. We have shown that population loss at the MSA level tends to be associated with a drop in population density at the core of the MSA. A question for future research is whether core density is particularly important for productivity or if the average level of population density across the MSA is all that matters.  If core density is important for productivity, then it might be important for policymakers across the entire MSA to consider measures aimed at keeping the center city densely populated.

Of course, policymakers need to take into consideration the desire that individual households may have for low-density housing far from the city center and weigh it against the productivity advantages of density. In some respects, by promoting a dense core, they may just be undoing or counteracting policy incentives that are already in place and distorting individuals' natural behaviors."

In other words, if policymakers here recognize the benefits of a dense regional core, as it relates to productivity, then they need to support policies that increases Detroit's population. But for Patterson, that's no good. He has a triple-A bond rating he must maintain.

On that note, here's South Park's take on the situation.