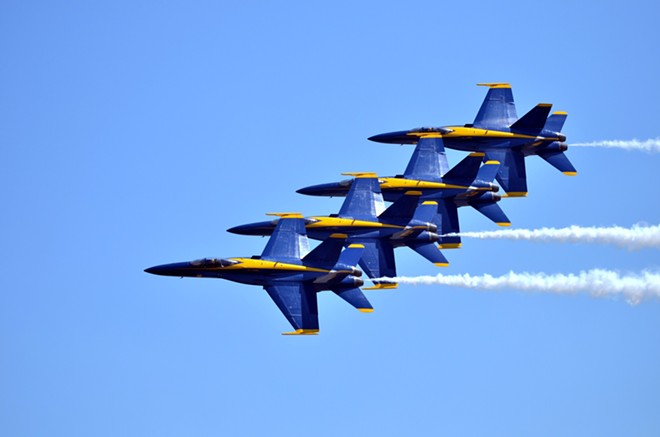 Nothing says “thank you for risking your lives during a global pandemic” quite like a flashy — and expensive — military aircraft performance.

Detroit is next up on the “America Strong” tour led by the Navy Flight Demonstration Squadron, aka the Blue Angels, and the U.S. Air Force Air Demonstration Squadron, aka the Thunderbirds. The gesture is part of a string of multi-city flyover performances intended to honor frontline workers and first responders as a “collaborative salute” in those cities hit hardest by the coronavirus.

The Blue Angels will fly over Detroit on Tuesday, May 12, before conducting flyovers in Chicago and Indianapolis.

Definitely makes more sense to do this instead of paying healthcare workers more or making sure they have enough protective equipment. https://t.co/2q907wAaE7


It was believed that the Blue Angels had planned on visiting Detroit last month but rescheduled after preliminary plans were leaked, The Detroit News reports. The flight time is expected to be announced Monday via the Blue Angels' Twitter.

Not everyone, however, is convinced that this is the best use of resources to honor health care workers and those on the frontlines, especially when there is a nationwide shortage of PPE and testing kits in cities that have been economically decimated by the virus.

When the Blue Angels and Thunderbirds flew over New York City last month, the performance drew criticism from residents who thought the stunt was a waste of resources. Others warned the sound of military aircraft could trigger PTSD in those who lived in the city during the 9/11 attacks.

oh yeah, the sound of planes loudly flying over NYC is an anxiety-free sound that everyone here enjoys


In New York, the stunt also drew crowds along the riverfront and throughout the city's parks. Photos show a lack of social-distancing and face masks, and, in one case, crowds gathered outside of a field hospital intended to treat coronavirus patients to catch a glimpse of the fighter jets.

Though costs have not been disclosed, The Washington Post estimates a flyover could cost $60,000 per hour, but says it's already accounted for in the Pentagon's annual budget. However, in 2017, Inverse revealed that it cost $109,000 to fuel six aircrafts during the 2011 Super Bowl.

But with an original flight itinerary of 22 cities — with some airbases adding additional planes to the mix, like a stealth bomber Kansas or an A-10, which is expected to do a flyover out of Selfridge Air National Guard Base in Harrison Township on Monday — the overall cost for Operation America Strong could be at least $1.32 million, Task & Purpose estimates.

According to a joint press release from the U.S. Department of Defense, the flyovers fulfill “critical training requirements” for both the Blue Angel and Thunderbirds teams and will “incur no additional cost to taxpayers.”