Biden isn’t Trump. Why do political journalists keep acting like he is?

If the old political rules are out the window, the old journalistic rules should be, too

Shutterstock
Both-sidesing Biden is leading to some audacious false equivalencies.

Speaking on a recent CNN panel, Francesca Chambers, a White House correspondent at USA Today, responded to a question about Donald Trump inviting a Nazi sympathazier who said he “wished Hitler would have finished the job” with this doozie:

“Optics are everything as you know in politics, John. As you can see there, the former president of the United States has run into some issues with optics coming out of his rally this week. And at the same time you saw President Biden come into some criticism for optics coming out of his event this week. Not comparing those two … but just saying that both President Biden and former president Trump are having some difficulties when it comes to optical issues that both could have avoided.”

Holy shit. A CNN panel member just compared a Trump rally speaker supporting literal Nazis to the background of Biden’s speech featuring a US Marine as both being “issues with optics.” pic.twitter.com/RqcuhXjwjs

Trump invited a literal Nazi sympathizer to speak at his rally. Biden had two Marines stationed behind him during an official address on the rising threat to democracy in the United States … all motivated by Trump.

Donald Trump broke the media, exploiting its inability to look away from the circus to dominate press coverage. While much of his coverage was negative, the controversy was the point. “Flood the zone with shit,” as his former advisor, Steven Bannon, dubbed their strategy, made Trump the singular most important news editor in every single newsroom.

Fast forward seven years since Trump first descended that gaudy golden escalator and it’s clear that there’s another way that Trump has exploited the traditional rules of an industry ill equipped to handle him: “both-sidesism.”

News outlets and journalists bristle at the assertion by Trump, his acolytes, and his base that they are somehow “liberal” or against Trump. In order to prove their objectivity, they rush to criticize Trump opponents, all leading to this odd brand of both-sidesism we keep seeing. Meanwhile, Trump continues to flood the zone with his own special brand of shit, continuously resetting the bar for himself — exacerbating the clear double standard for what earns criticism on both sides.

Ultimately, it leaves pundits and journalists — in the name of objectivity, mind you — criticizing politicians who are not Trump for things for which they would never criticize Trump. Not so “objective,” is it?

But that’s exactly what happened after President Biden’s prime-time official address to Americans about the threat to democracy that the MAGA wing of the Republican party poses. Rather than engage with the substance of the speech, some chose to call the president out for the Marines in full-dress uniform stationed behind him, arguing that he had politicized the armed forces. Except that every single member of the military has sworn an oath to defend our Constitution, the very document that MAGA Republicans are opposing. 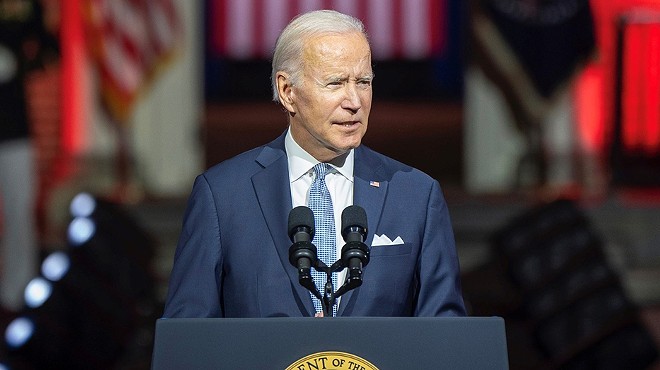 Biden’s ‘Soul of the Nation’ speech was by far his most important yet: An extremist, authoritarian right is taking over the Republican Party

The truth is that one can’t possibly cover Trump and Trumpism within the business-as-usual operating parameters of traditional political journalism. That assumes that both parties are engaging in a good faith political competition governed by the same rule of law. When one party is dominated by a movement that has consistently questioned the results of literally the most secure presidential election in American history, they’ve thrown the old political rules out the window. And if the old political rules are out the window, the old journalistic rules should be, too.

Trump declared war on journalism, recognizing that a pre-emptive strike could frame as biased the inevitable coverage he received for failing to govern effectively and breaking the most basic democratic norms. And journalists are falling into his trap.

Rather than resort to the knee-jerk both-sidesim, responsible journalism in this moment requires that we consistently, vociferously, and plainly reiterate just how dangerous a threat to democracy Donald Trump and his movement actually pose.

Because, let’s not forget: if democracy goes, freedom of the press will go with it.

Originally published Sept. 7 in The Incision. Get more at abdulelsayed.substack.com.