Yes, I am a foot fetishist 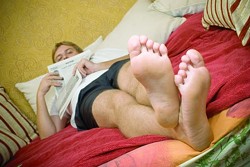 I’m an actor in New York City. A lot of people think actors are whores, but last week I almost became one. I responded to a casting call for a film project called Sniff. The ad — on Playbill’s website — called for two male actors to film a short scene. The pay was $100 for a day’s work. I was emailed the scene to study. It starts with two male roommates chatting on a couch. The bigger, more muscular roommate confronts the smaller, scrawnier roommate about his obsession with socks. Two pages later, the smaller roommate is being ordered to sniff, lick and caress the larger roommate’s feet. The scene ends with the smaller roommate being forced to hold the bigger roommate’s big toes in the corners of his mouth while smiling for the camera. Write a screenplay and hire actors — is this something foot fetishists do to make low-budget softcore porn? I’m not a hater of fetishists, but it is a little strange to see something like this in a casting ad. —Freaked-Out Oblivious Thespian

P.S. The audition was surprisingly normal. I wasn’t asked to remove my clothes or lick any feet. I wasn’t cast. After the audition, the director requested a picture of my feet via e-mail. I did not send him one.

“Yes, I am a foot fetishist,” said Anthony Fusco, the writer and director of Sniff and the person for whom you auditioned. “I’m also a theater person.” I reached Fusco the same way you did: through the contact info in the audition notice in Playbill. It turns out that Sniff is one scene in Big Naked Feet, a five-scene, one-act comedy that Fusco wrote, directed and produced at a small venue in New York in 2008. “We got a good response,” Fusco told me. “We had full houses; people walked away smiling.” Big Naked Feet isn’t Fusco’s only play. Another of his plays — Crossing Verrazano — was produced as part of the Strawberry One-Act Festival in 2011.

I told Fusco that his six-page script for Sniff read like fetish porn (“Good dog, Paul, now take a step back and just stare at the beauty of my manly feet!”) and that his audition notice had my bullshit detectors going off. It would be a lot cheaper for a foot fetishist to pay two actors to bring his fantasies to life than, say, two male escorts. You can find good-looking actors who’ll work for $100 a day. A good-looking male escort, on the other hand, will run you $1,000 or more a day. But Fusco insisted the video is intended as promo material for a planned remount of Big Naked Feet, not foot-fetish fap material.

But, come on, one hot guy going to town on another hot guy’s feet? Wouldn’t Fusco beat off to that? Wouldn’t any foot fetishist? “I’m so used to this stuff,” he said, “it’s nothing new to me. I’m not going to say it can’t be exciting or a turn-on. So it depends on how the final product turns out, I guess, and how it looks.”

P.S. Coincidentally, FOOT, after our interview, Fusco requested a picture of my feet via e-mail. And I sent him one — because, hey, why not?

My boyfriend is HIV-positive and I am not. We haven’t been intimate yet because he’s not ready. He blames his HIV for everything. I know HIV is very serious, but I have some questions. I can’t ask anyone I know without spilling his secret. If he misses taking his meds by 10 minutes, will it seriously affect his health? He has forced me to leave movies early, refused to go to work functions with me, and even missed my birthday because we would miss his 10 p.m. med schedule. Anything that goes bad in our relationship, he blames it on the fact that he is positive and I am not. I feel like he manipulates me with his illness. —Positively Flustered

“My answer to PF’s question — will his boyfriend’s health be affected if he takes his meds 10 minutes late — is a resounding no,” said Peter Shalit, a doctor, author, and public speaker who has been treating HIV patients for 25 years. “Modern HIV meds have a lot of flexibility around when they are taken. His boyfriend can also carry the meds in his pocket if he’s so OCD that he has to take them at the same exact minute every day.”

Dr. Shalit doesn’t think HIV is the problem here. “His boyfriend needs to stop blaming everything on his HIV, deal with it, and get on with his life,” he said. “My advice to patients taking meds for HIV: The daily act of taking your meds should have as much impact in your life as the daily act of brushing your teeth. How would it sound if someone said, ‘I can’t come to your birthday party because I need to brush my teeth’? It sounds like he is using his HIV as a weapon.”

Dr. Shalit and I both wonder why you put up with this guy. “He doesn’t sound very pleasant to be around,” said Dr. Shalit, and I agree. End this relationship — not because your boyfriend is poz, but because he’s an asshole.

I met a boy on an online sports forum, and I’ve fallen for him. And from what I can tell, he’s fallen for me. The problem is that early in our relationship, he expressed certain attitudes about race that caused me to not be 100 percent honest with him. It turns out that he dislikes men of color and feels they are responsible for many of the problems in this world. Upon discovering this, I claimed to be white and even went so far as to use Photoshop to make myself appear white in the pics I sent him. I’m not black, but I am not white. And now that our relationship has come to the point where a meeting is planned, I am absolutely distraught. He is always so kind and loving, but when he makes comments about “ashy knees” and “big ethnic noses,” I cry inside. We’ve been together for a while, and I know he loves me, but I fear that he might not see past my skin color. He’s young and Canadian, and I believe that he can overcome this. How do I go about confessing? Do I just show up to meet him at LAX, smile, and hope for the best? —Lost And Worried

First off, LAW, you’re not in a relationship. You’ve never met this person — excuse me, you’ve never met this racist piece of shit — and while two people can get to know each other via email, two people who’ve never actually met are not “together.” You were alone in your room with your laptop the whole time, LAW, lying to a racist piece of shit and deluding and undervaluing yourself.