State Funded Health Care is Communism, except when it's for Lansing Pols 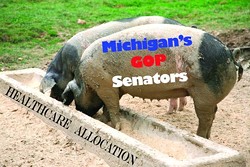 Here’s something so awful that even a hardened old cynic like me had a hard time believing it, at least for a nanosecond.

You know all those Republicans in the state Senate who fought hard against extending Medicaid benefits to the working poor? Turns out they aren’t completely without compassion: Every one of them voted to give lifetime, state-funded medical benefits … to themselves.

As for the poor? Their clear message is they should go crawl in a hole and die.

Even though they failed to stop Medicaid, most — as I write — are still working to hurt the poor and cost the state hundreds of millions … out of spite. That’s what they did by voting against giving the bill immediate effect.

More on this later. But first, an admission: I had known and written about the legislators’ sweetheart benefits deal, back when they did the deal to give themselves lifetime health care, in November 2011. But I had forgotten.

That’s easy enough to do, given that there have been so many Lansing-originated atrocities since then. Fortunately Brian Dickerson of the Free Press reminded us all of the hypocrisy of these contemptibles in a brilliant column last Thursday.

That ended my brief moment of guarded optimism last week. Indeed, something did happen then to give us a little glimmer that maybe, just maybe, things aren’t entirely hopeless. On Aug. 27, the state senate finally, after fighting for months, voted to extend Medicaid benefits to some of the working poor.

Medicaid, the federal last-resort, basic health care plan, has been available to people officially living in poverty — which for a family of four, means living on $23,530 a year, or less.

With the Patient Affordable Care Act kicking in, the Obama administration offered to raise eligibility to any such family making less than $31,322 a year, in part because those folks will be required to have health insurance or face a fine.

That, the statisticians say, means 320,000 people who have no health insurance will soon have it, a figure that will eventually rise to almost half a million in Michigan alone.

What’s more, Washington will pay all the costs for the first three years, and the state will pay a pittance thereafter. The most the state will ever pay is 10 percent of the cost, and that’s not until 2020.

Gov. Rick Snyder may not be Mr. Compassionate, but he is a skilled costs-and-benefits guy. He realized instantly that this was an enormous deal that would save lots of people money — the poor, who otherwise will be fined for having health care, but also businesses, which eventually will have to provide coverage or be fined, and which stand to benefit from a healthier workforce.

Not to mention the rest of us, including those who have insurance, and are paying extra for it because of the uninsured who swell our emergency rooms.

The Tea Party lunatics fought this tooth and nail. About the closest they came to a rational argument was the claim that we shouldn’t burden future generations with another “entitlement legacy cost.”

However, the truth is that they just flat-out hate President Obama’s Affordable Care Act, and many or most of them hate the man himself.

They hate expanding Medicare in part because they see it as an expansion of “Obamacare,” since one reason it is being extended is to fulfill the requirement that we all have health insurance of some kind. Though they still mutter about repealing Obamacare, that isn’t going to happen.

Congress passed the bill three years ago. The bill passed constitutional muster with the U.S. Supreme Court, and then was essentially ratified by the voters in Michigan and the nation when they chose to re-elect President Obama.

It is here to stay. Now, a majority of the Legislature has voted to expand Medicaid. But fanatics of the far right had one last trick to play. They refused to give the bill what is called “immediate effect.”

When a bill is passed, the rules are that it doesn’t become law for 90 days after the session ends — unless there’s a two-thirds vote to give it “immediate effect.”

This matters here; big-time Medicare expansion kicks in next January first. Unless Michigan votes to give the just-passed bill immediate effect, we’re all screwed.

The poor folks could be liable for a fee of $95 — or more — for not having health insurance, plus additional fines of half that amount for any children they may have.

Worse, the state will lose a vast amount of money — $7 million a day, which it would get from the feds if the Medicaid expansion were in force. Over the three months before the bill kicks in, that amounts to $630 million!

So Michigan loses a ton of money by not giving the bill immediate effect. Incredibly, that doesn’t matter to the ideologues of the rabid right. Scott Hagerstrom is the puppet director of the Koch Brothers’ grotesquely misnamed Americans for Prosperity-Michigan.

Like an evil imp, Hagerstrom was out there last week trying to get lawmakers to resist giving the bill immediate effect. Obama supporters, he whispered, “want to rush us into implementing Washington’s failing health care takeover.”

He’s right about one thing: We do indeed want to rush to prevent these truly evil people from destroying the lives of poor people and what remains of their safety net.

By the way, of the 14 state senators who voted against giving the bill immediate effect, all but one has lifetime health care for themselves. And not one has offered to give it up.

These are all Republicans; all against any expansion of health benefits for the poor, all getting sleek at our expense.

To the extent they are successful; our lives will all be a little more miserable and desperate.

The Numbers On Labor Day:

Some union members sometimes sport T-shirts or bumper stickers saying:”Unions: The People Who Brought You the Weekend.”

Well, the Michigan League for Human Services has released a fascinating and depressing report that shows what we knew already: That decent wages and the middle class are endangered species. Those earning the median wage in Michigan today have 7 percent less purchasing power than they did in 1982.

The situation is even worse: Michigan’s median earnings fell from fourth in the nation then to 24th now, and has dropped more than any other state — except Alaska.

What could government do about this? Simple: “Raise the minimum wage to make up its erosion due to inflation.”

That, and make it easier for people to get more education beyond high school. You might think this would be seen as our biggest crisis. Matter of fact, in a rational world, it would be.