Art, a 'makers space,' and big brands that cannot be named coming to Detroit's tallest building 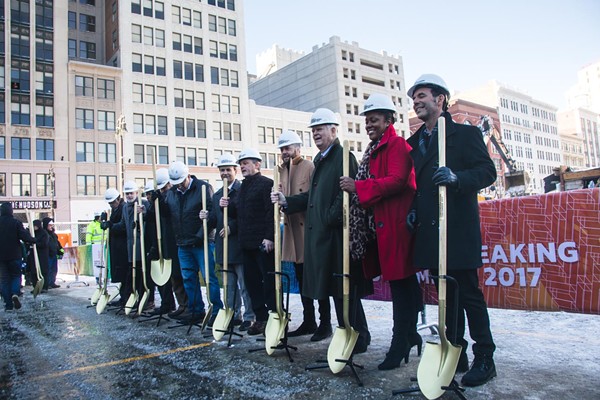 Jordan Buzzy
Gilbert and Detroit city officials during the ceremonial groundbreaking.
The nearly $1 billion dollar, taxpayer subsidized skyscraper coming to Detroit is going to have a lot of neat stuff curated by Dan Gilbert and company, who have curated nearly all of downtown. Fittingly, they've described the residential and retail project at the old Hudson's site as a "city within a city" — their city, within their city, paid for by you!

There will be a "makers space," where kids will "make and play with robots," one of the architects on the project said at yesterday morning's groundbreaking ceremony. There will also be "artists having eureka moments in the galleries and the studio in the exhibition hall."

And of course, there will be brands. "Big, large, known brand names" could round out the retail portion of the mixed-use building, Dan Gilbert told the crowd of people gathered yesterday. He said he was not "at liberty to discuss" those which had shown interest in the space.

One or two of the companies to be situated in the building belong to the Quicken Loans family, Gilbert said. This is important, because as Gilbert seeks $618 million in taxpayer subsidies to pay for the skyscraper and a few other downtown projects that will cost a little more than $2 billion to build, he's promised to bring 9,000 new, non-construction jobs to Detroit. We've often wondered just how many of the jobs at the Hudson's site will actually be new, or whether they'll be jobs pulled from elsewhere, with some of the associated income taxes now going to Gilbert and co., as opposed to the state. 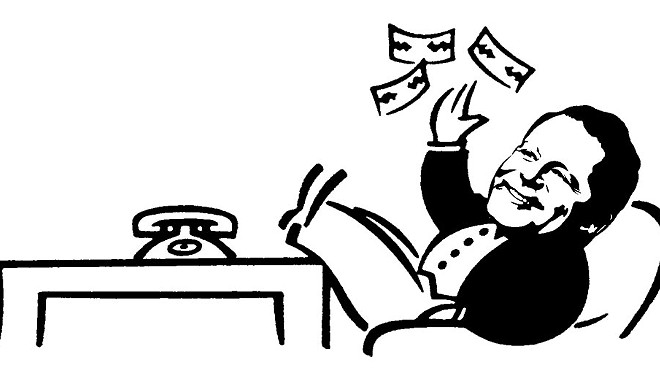 The enhanced subsidies through which Gilbert can siphon a portion of the income taxes of workers and residents at his skyscraper have been the subject of much contention. Approved in Lansing this year after Gilbert's folks poured hundreds of thousands of dollars into the campaign coffers of influential lawmakers, the so-called "transformational brownfield" incentives have been described as a giveaway for the rich. Gilbert has rejected this characterization, saying the incentives help pay for a project that will be a net positive for the economy, a project that wouldn't be built without the added boost.

In Detroit, a small group of vocal activists has objected to the public money going toward the Hudson's project because it won't provide proper benefits to the community. Community members — in this case, all of the Michiganders who will miss out on hundreds of millions in tax revenue that could help fund schools and other services — were, of course, never directly consulted in the decision to use public money to further develop an already glimmering downtown.

While the city has a community benefits ordinance on the books that is cast as a way to get developers receiving tax breaks and the like to provide appropriate public goods for city residents, activists have described the law as impotent. The ordinance requires developers to clear only a superficial hurdle before they can get their money, the activists say. 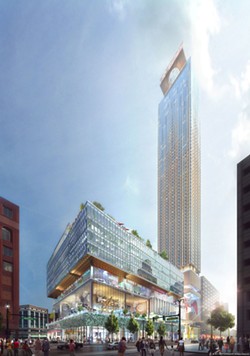 Courtesy photo
A rendering the proposed development for the site of the former J.L. Hudson’s department store.

A little more than a dozen of those objectors staged a protest near the site of the groundbreaking yesterday morning. The demonstrators were with the Detroit People's Platform, which pioneered a substantive community benefits proposal that was defeated by voters last year, following a well-funded, trade union-backed campaign for a weaker alternative.

Organizers with the Detroit People’s Platform told the Detroit News that Gilbert’s Bedrock should be required to have a specific number of Detroit-owned businesses and affordable housing units in the new skyscraper. In developing the Hudson’s site, Gilbert's folks have managed to skirt the city's 20 percent affordable housing rule for new developments by promising to meet that quota across a portfolio of new residential units to come over the next several years, rather than offering affordable units at each site. (The term "affordable" is already somewhat of a misnomer in Detroit — as individuals making nearly $40,000 a year qualify for such housing.)

Gilbert's Bedrock says it will create 'affordable' housing in downtown Detroit. Here's what that actually means

The site's developers will also have to ensure that Detroiters fulfill at least 51 percent of the work hours during the construction phase of the project, or they'll face millions of dollars in fines. The Little Caesars Arena, a recent project of a similar scale, missed the mark and paid the fines. At issue, developers say, is the lack of skilled-workers in the city. Government officials have taken some steps to get more Detroiters construction job-ready, investing $10 million worker training site earlier this year. Gilbert's companies donated $250,000 to that project.

Construction on the Hudson's site is due to begin in spring and be completed in 2022. 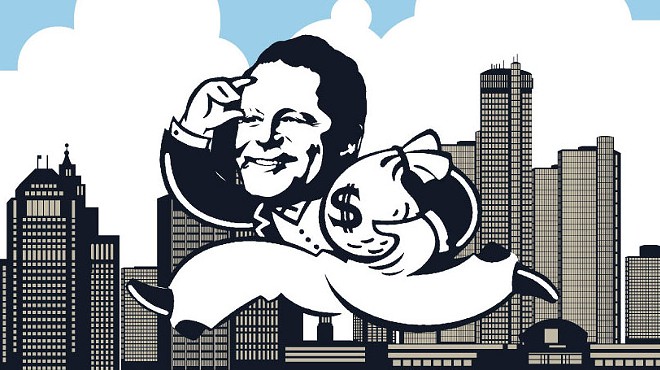