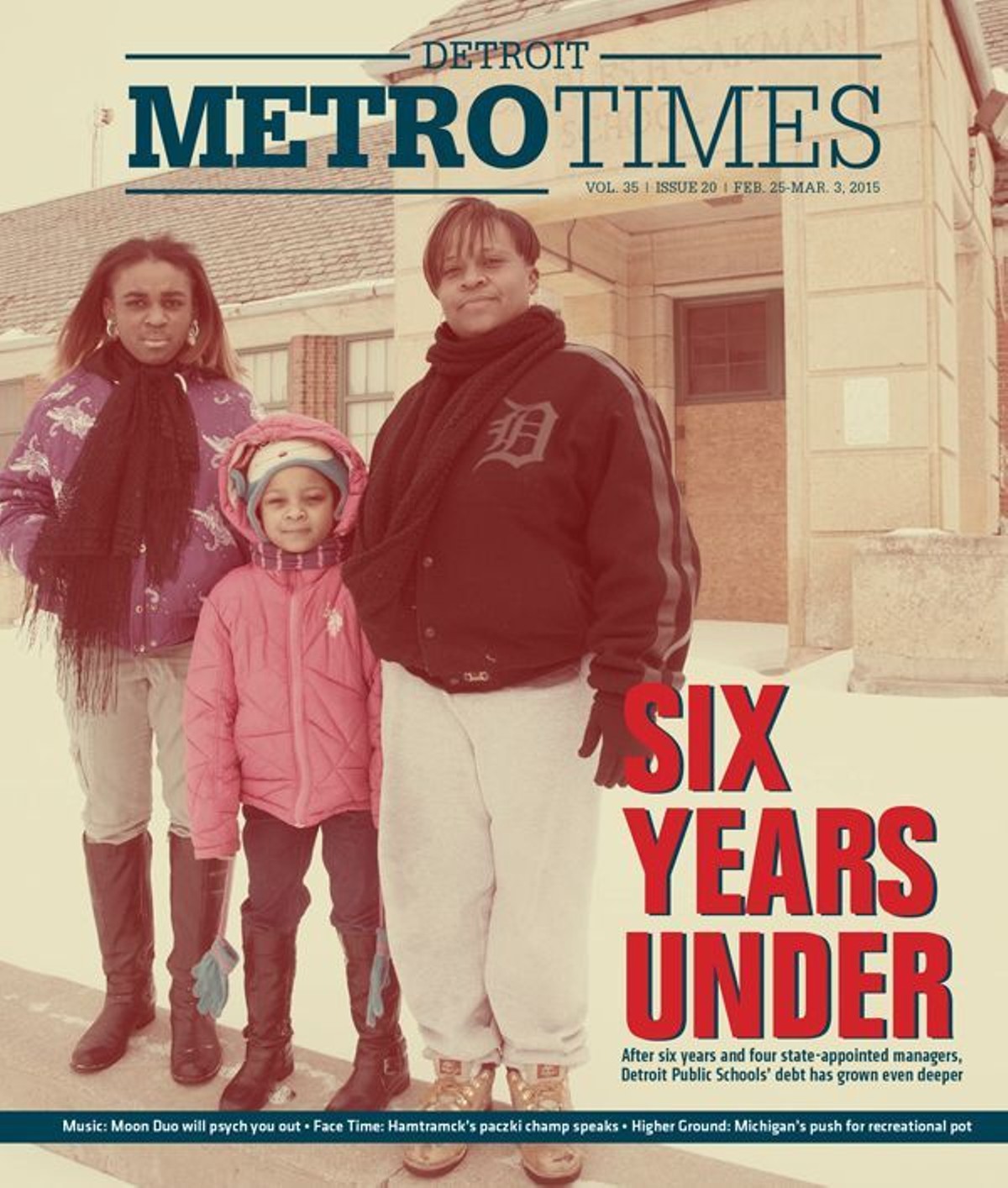 In January 2009, Democratic Gov. Jennifer Granholm turned to what was then a little-used state law, Public Act 72, to appoint an "emergency financial manager" charged with addressing the district's ongoing financial troubles.

"Robert Bobb is a proven leader who brings valuable expertise in financial and executive management and a passion for urban education," Granholm said when announcing Bobb's appointment. "Robert has the ability to get the Detroit Public Schools' fiscal house in order so the district can devote its attention to ensuring that every student receives a quality education."

There was controversy as well.

"It turns out [Bobb is] a recent graduate of the Broad Foundation's Superintendent Academy. The Broad Foundation, along with the Kellogg Foundation, pays Bobb $145,000 a year on top of his $280,000 government salary," wrote Susan Adams of Forbes magazine. "For those of you not familiar with Broad, it is one of the leading foundations promoting school choice and privatization across the country."

In theory, the relationship between Bobb and the elected board was supposed to be a power-sharing arrangement. The emergency financial manager law limited the scope of Bobb's authority to strictly financial matters, with academics and related issues remaining under the purview of the elected board members and the superintendent they'd hired.

At least that was the board's interpretation.

Bobb had a much more expansive view of his authority, saying, "If a penny touches any of the issues involving the Detroit Public Schools system, then I am engaged and involved."

He wasn't going to let the board stand in the way of that.

"We're moving forward with our plan," he said six months into his tenure. "At this point it's up to the school board whether they and we are going to work together."

The board, believing the law was on its side, chose to fight. Meanwhile, in terms of what was clearly his responsibility — trying to balance the district's budget — Bobb was clearly failing.

Bobb did not respond to requests to be interviewed for this story.

After having vowed to put the district in the black by producing a multimillion-dollar budget surplus in his first year, the actual results were dramatically different.

"Instead of a $17 million surplus Bobb projected for this fiscal year, spending has increased so much Bobb is projecting a $98 million deficit for the budget year that ends June 30," The Detroit News reported in March 2010.

A year later, the district's financial situation had grown so dire Bobb had to go before the state legislature seeking its help. He wanted lawmakers to approve what was termed "bond security legislation" — basically a state promise to cover debt payment to assuage lender fears that the district might go bankrupt. Without such a guarantee, lenders were demanding interest rates that would be crippling.

To help assure legislators that the district was being run responsibly under his control, Bobb touted his efforts at cost containment. Those measures included slashing the district's work force by more than 25 percent, privatizing custodial and other services, and establishing the Office of the Auditor General, which he said had "conducted 220 audits and 29 investigations. The audits helped to strengthen internal controls for cash management and improved operations in food services, finance, athletics, payroll, and public safety. The investigations conducted by the OAG have resulted in several cases being turned over to the Inspector General for further review."

Bobb also instituted other far-reaching budget cuts that included closing 59 schools in the span of two years. Despite all that and more, the district's financial situation continued to deteriorate, with Bobb blaming the problem on "unanticipated" revenue declines. Critics pointed to the high-priced consultants and contractors Bobb brought in as a factor.

Of particular note was Barbara Byrd-Bennett, hired by Bobb on a nine-month contract to be the district's chief academic and accountability auditor. She received a salary of nearly $18,000 a month plus an armed personal driver. In addition, Byrd, a former chief executive officer of Cleveland's public schools system, "brought with her at least six consultants who are collectively being paid more than $700,000 for about nine months of work," according to a 2009 Detroit Free Press article.

Whatever the cause, the DPS' sinking bottom line was this: The deficit had grown to $284 million under Bobb's watch.

No one could dispute that the ongoing loss of students was a major factor.

The district had lost "83,336 students in the last decade, representing a decline of more than 50 percent and at a rate much higher than the loss in population within the city of Detroit," Bobb told legislators. That resulted in "a related decline in state aid of more than $573 million since 2000 alone."

In the midst of closing dozens of schools, declining enrollment, teacher pay cuts, and layoffs, Bobb put great effort into an ultimately successful campaign to have Detroit residents approve a $500 million bond issue, with the money used to build eight new schools and modernize 10 others.

The loan would be repaid by extending for six years an increased millage tax placed on the city's property owners.

Part of the reason school enrollment fell at a rate much higher than the city's overall population could be traced to other "reforms" passed during the Engler administration in the 1990s. The establishment of both charter schools and school choice legislation — implemented on the stated theory that increased completion would force schools to improve in order to attract students much as if they were "customers" in the free market — added to enrollment declines at DPS.

Such borrowing would be an integral part of the strategy employed by Bobb and his state-appointed successors in coming years as they struggled to stem the district's relentless tide of red ink.

As for the fight for control over academics, a court win for the elected board turned out to be a pyrrhic victory.

In reaction to what many in Detroit Public Schools saw as Bobb's overreach, the elected school board sued in an attempt to curtail his efforts to control academics as well as the district's finances.

In December 2010, Wayne County Circuit Court Judge Wendy Baxter ruled in favor of the board, saying it was responsible for curriculum issues.

"Ironically, Judge Baxter's ruling comes a year almost to the date after the announcement that Detroit's schoolchildren ranked lowest in history on a national math test," said Bobb in response at the time. "Judge Baxter's ruling is a step backward and endorses the past academic policies which, along with the financial practices and the overall direction of the school district, were a total failure."

He didn't mention that, at that point, the elected board had only had control for three of the previous 10 years. But it really didn't much matter for him personally, because Bobb would be on his way out of town within six months.

More significantly, Republican Rick Snyder was about to move into the governor's office at the start of January 2011.

One of the first orders of business after Snyder became governor was passage of a law that greatly expanded the powers of emergency financial managers. Public Act 4 was seen by many as a direct response to the Detroit Board of Education's court victory limiting the scope of Bobb's power.

The change was reflected in the title given to appointees assigned to financially failing cities and school districts. Instead of being emergency financial managers, they were simply "emergency managers," with a range of authority unequaled anywhere else in America.

These emergency managers could end contracts (including collective bargaining agreements), sell off assets, abolish and create local ordinances at will, change governmental structures, and determine what, if any, authority elected mayors, city councils, and school boards could have.

In regard to school districts, they were given unilateral control of academic policies — which is exactly the broad authority Bobb wanted, and his replacement, retired General Motors executive Roberts, would have.

In reaction to the sweeping powers granted to emergency managers under PA 4, a petition drive was immediately launched to let voters statewide decide if they wanted a law that far-reaching. When it finally qualified for the ballot in August 2012, it was automatically suspended. When that happened, appointed emergency managers such as Roberts reverted to being emergency financial managers with more limited authority. In November of that year, voters soundly rejected the law.

The response by conservatives in the legislature was to quickly pass Public Act 436, which looked much like its predecessor in many ways. One major difference, however, was the attachment of appropriations. That made the new law "referendum proof."

When the law took effect in March 2013, Roberts regained complete authority over all aspects of the district.

But the district continued to lose students and the money that came with them. What made things different at the start of the 2012-13 school year was that much of the bleeding could be directly attributed to a self-inflicted wound.

Created at the behest of Snyder, a unique school district called the Education Achievement Authority was initially tasked with taking over 15 of Detroit's lowest-performing schools. It was created through a little-used state law that allows two units of government to form a new entity. In this case, the signatories to the agreement were Eastern Michigan University and Detroit Public Schools' emergency manager.

The EAA opened its doors in September 2012, and the impact on DPS was both immediate and severe.

In a financial report submitted to the state, DPS reported:

"A continuing financial and budgetary challenge for the District is the continuing decrease in pupil enrollment. Over the past several years, the District's pupil enrollment decrease has averaged approximately 10 percent. ... The most significant factor driving higher than normal enrollment for fiscal year [2012-13] was the transfer of 15 schools along with their students (11,000 pupils) to the Education Achievement Authority ..."

The EAA has been mired in controversy since its inception. EAA Chancellor Veronica Conforme, in an attempt to improve both the district's academics and its badly tarnished public image, recently announced a major overhaul intended to give individual schools more autonomy and freedom to innovate.

The only apparent positive for DPS in all this is that enrollment has declined significantly at the EAA,with many of these students apparently returning to the district.

With regard to academics, there's ongoing dispute regarding how well students have done since the state stepped in six years ago.

Getting to the truth of that matter is difficult, in part because there are multiple ways to evaluate the state's standardized test results, a main measure of student achievement.

Take, for example, this statement made in a DPS publicity brochure:

"Since 2010, Detroit Public Schools students' standardized assessment scores [showing their proficiency in different subjects] on the Michigan Educational Assessment Program (MEAP) have risen in 14 of 18 subjects/grades tested. DPS closed the gap with state peers in a number of categories. For example, in the vital Reading assessments, DPS closed the gap (demonstrated increases in performance exceeding statewide increases) in 5 of the 6 grades tested."

If, however, you look at how those proficiency scores compare to those of students across the state, the results appear quite different.

"Since the state intervened in 2009, an overwhelming majority of non-charter public school students in Detroit continue to lose significant ground when compared to their peers across the state," according to an extensive analysis of MEAP scores done by Wayne State University education professor Thomas Pedroni, who heads the university's Leonard Kaplan Education Collaborative for Critical Urban Studies.

Also significant, when making comparisons to previous years, is the fact that the recent test scores touted by the DPS do not include the EAA.