Advice from a crush

Girl has the hots for Tegan and Sara; that's funny, because Dan happens to have Tegan right here 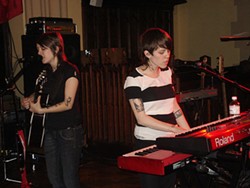 I've been confused about my sexuality for two years. I am a 22-year-old female. I liked guys when I was in school, but then, in perhaps the most stereotypical of fashions, I developed a huge crush on Tegan and Sara when I was nearly 20. I like the idea of being with women, but I have never had a major crush on anyone since. So I'm really confused over what my sexual orientation actually is. I know many hetero-identifying people experience same-sex crushes, but can someone's whole sexual orientation just change overnight? My confusion is compounded by the fact that I've never even held someone's hand, been kissed, or done anything else. I really want to experience such things, to have an awesome relationship, and to generally just stop feeling like a complete loser. Any help appreciated! —Awfully Nervous Over Newness

"When I was young, I dated boys," says Tegan Quin, one-half of the popular indie duo that prompted you to question your sexuality. "I never thought about love or being 'in love.' And I never thought about sexuality. I was lucky to have a group of friends much more interested in each other than dating. And so I was fairly untroubled about my status. Until I kissed a girl. Then I knew who I really was. I was gay."

Oh, hey, I hope you don't mind that I shared your letter with Tegan and Sara, ANON. I figured you might appreciate getting some advice directly from your potentially life-altering crush.

Like you, ANON, Tegan used to assume she was straight.

"I'd gone most of my teens crushing on guys like Jared Leto, thinking that must make me straight," says Tegan. "Even though secretly I was dreaming of make-outs with Claire Danes, I thought my crush on Jared Leto vetoed my secret girl crush on Claire Danes. Maybe that was society weighing down on me. Perhaps it was peer pressure keeping me inside the lines of heterosexuality. Or, likely, I just liked them both."

"Sexuality is not hard lines," Tegan says. "It's not black-and-white. Not for all of us, anyway. Some people know their whole lives who they are. Some people don't. My advice: Go and kiss a girl, go and hold a boy's hand. Don't worry about who you are until you find out what you like. Maybe you'll like both — and yay if that's the way it turns out, because that means you have twice as many people to fall in love with."

And while Tegan doesn't think a person's sexuality can change overnight, she believes — she knows from personal experience — that a person's awareness of their sexuality can change overnight. "You can have an awakening," Tegan says, "like I did when I first kissed a girl. A whole new world can absolutely be waiting for you if you end up feeling up to exploring it. Good luck!"

Tegan and Sara's newest album is Get Along, and they're about to embark on a tour of North America. For info, tour dates, music, merch, and more, see teganandsara.com.

I'm a twentysomething professional snowboarder. I have a problem that I don't really have anybody to talk to about. When I jerk it, I have to put a finger in my asshole to finish. Plain and simple, that's the only way I can come. I've tried to learn to come without the finger, but I can never reach climax. I can't even come in a girl's pussy without sneaking a finger in my back door. I go to great lengths to hide it — push her head in a pillow, etc. — because I don't want them to think I'm gay. (I have no problem with other people being gay, just FYI. It's just that you do not want snowboard groupies thinking you're gay. Girls talk, and then you never get laid again and all of your bros find out you're sticking things up your butt.) This letter is actually time-sensitive. I'm pretty distraught that last night one of my regular chicks saw me do it! Today she won't return my texts. I want to convince her I was scratching an itch or something. I'm worried it might already be out there that I'm "gay." How do I learn to come without prostate stimulation? —Butt-Using Manly Man Entirely Distressed

Because otherwise they would come during straight sex, right?

Your letter made me wonder how many of these girls are dating guys like you, BUMMED. That is, guys who need a poke in the prostate in order to come but either haven't figured that out yet or know it but don't wanna risk it in front of their girlfriends because their girlfriends might think they were gay if they did that. But their girlfriends think they're gay anyway — because they're not poking and not coming.

A few practical suggestions: Get a butt plug. It's a butt toy that your sphincter muscles hold in place — picture a small lava lamp that fits in your ass — and once you get it in, BUMMED, it won't slip out. Provided your groupiefriends aren't touching your asshole or looking directly at it, they won't even know it's there. And a butt plug might help you break the strong mental association you've made between finger-in-hole and climaxing. A few dozen look-ma-no-finger-in-hole orgasms, courtesy of a butt plug, might help you transition to look-ma-nothing-in-my-hole orgasms.

Get a girlfriend. I'm not a noted proponent of monogamous coupling — go ahead and Google me — so please don't dismiss this as standard-issue advice-professional moralizing. But you might benefit from opening up to one person, someone you can trust with your secret — that will, however, require an investment of time and emotional energy. But the payoff could be huge. Imagine having sex with someone you didn't have to hide from, BUMMED, someone who you didn't have to worry about judging you because she understood.

Dear readers: David Rakoff died last week. He was a writer, a contributor to This American Life, and an all-around spectacular human being. His books — Half Empty, Don't Get Too Comfortable and Fraud — are terrific. If you haven't read David's books, please read them now. My heart goes out to David's family and to his countless friends. To get an idea of how many lives David touched, spend some time at rorevans.tumblr.com.

Find Dan Savage's weekly podcast every Tuesday at thestranger.com/savage. Contact him at [email protected] or @fakedansavage on Twitter.