The approval means the 1931 ban will no longer be enforced The right to abortion services and care was protected Tuesday in Michigan as voters passed Proposal 3, despite a campaign that was somewhat mired in controversy.

With 85% of the votes tabulated early Wednesday morning, voters approved Proposal 3 with 55.5% voting yes and 44.5% voting against it.

Reproductive Freedom for All (RFFA), the coalition that introduced the ballot initiative to amend Michigan’s constitution to protect reproductive rights and access to care, celebrated the victory.

“Today, the people of Michigan voted to restore the reproductive rights they’ve had for 50 years,” said RFFA communication director Darci McConnell in a statement. “Proposal 3’s passage marks an historic victory for abortion access in our state and in our country – and Michigan has paved the way for future efforts to restore the rights and protections of Roe v. Wade nationwide.”

Michigan, we made it happen! Your votes helped #RestoreRoe and protect #ReproductiveFreedom for generations to come. Thank you to everyone who volunteered, hosted a yard sign, and voted for #Proposal3 this election! pic.twitter.com/QDbRQq2pj9

— Reproductive Freedom for All (@mireprofreedom) November 9, 2022

Paula Thornton Greear, the president and CEO of Planned Parenthood of Michigan, also released a statement:

“Abortion access is a human right – and we are grateful that Michigan voters overwhelmingly supported Proposal 3, permanently enshrining these rights into our state constitution.

PPMI has been fighting to protect sexual and reproductive rights in Michigan for decades, and when we saw the end of Roe v. Wade on the horizon, we didn’t wait to take action. We immediately filed suit to protect health care access across our state and won an injunction barring enforcement of Michigan’s 1931 criminal abortion ban.

But we didn’t stop there. We continued to pursue every avenue to protect abortion rights in Michigan. With the passage of Proposal 3, Michiganders’ rights are more protected than ever and reproductive freedom is explicitly enshrined in the state constitution.

This historic victory will ensure that Planned Parenthood of Michigan can continue to provide the high-quality reproductive health care our patients depend on.”

Lauren Khogali, the executive director of ACLU of Michigan, also released a statement:

“Thank you, Michigan voters, volunteers, supporters, donors, advocates and coalition partners, who gave everything to ensure this historic victory! Today’s win belongs to all of us. Together, we blazed a trail, making Michigan a national model of what other states can achieve across America.

Given the strength, resilience, and determination of all the people who are engaged in the movement, I am confident in the path ahead.”

In June, the U.S. Supreme Court overturned Roe v. Wade, the landmark decision that protected a person’s right to an abortion, and vetoed any federal or state ruling that said otherwise. The decision resulted in states turning to their own laws and constitutions, with Michigan being one of 28 states banning abortion with a nearly century-old law. 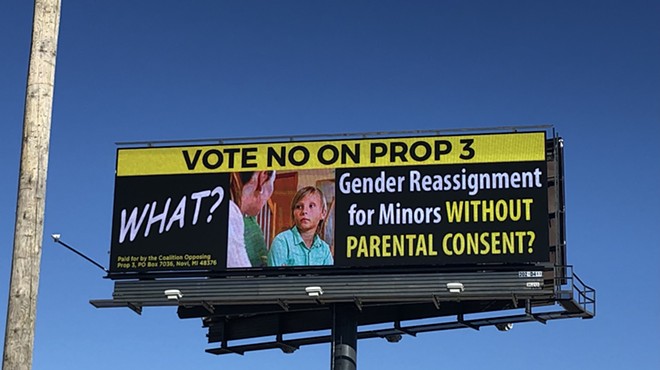 Debunking myths about Michigan’s Proposal 3: Many lies have been told about the abortion rights initiative, but what does it actually say?

Things quickly became a little messy and complicated following the overturning of Roe.

Governor Gretchen Whitmer immediately filed an injunction preventing county prosecutors from enforcing the ban in Michigan, and also created an executive order that prevented the extradition of out-of-state abortion patients traveling to Michigan for care.

In August, the Michigan Court of Appeals overturned Whitmer’s previous injunction, allowing county prosecutors to be able to charge abortion providers. Then, the next day, Whitmer was granted a restraining order that, once again, blocked prosecutors from enforcing the 1931 law.

Now that the proposal has passed, the amendment won’t take effect until Dec. 23, 45 days after the election.

Born and raised on Detroit's Westside, Alex Washington is about as Detroit as they come. She judges your coney island order and serves a mean side-eye when anything across Eight Mile is called "Detroit." Her writing has been published in Real Detroit Weekly, The Detroit Free Press, Model D, BLAC magazine, and...
Read More about Alex Washington
Scroll to read more Politics & Elections articles