A few thoughts on Detroit’s 60 years without streetcars 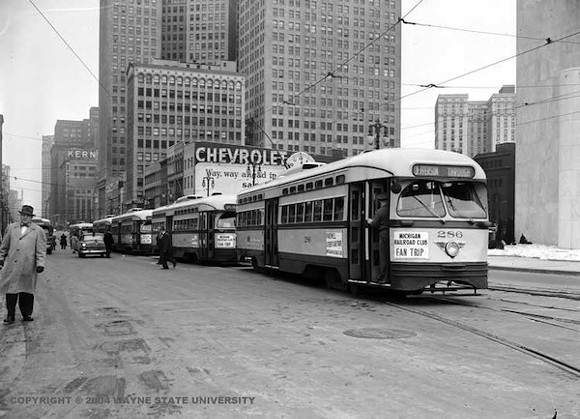 Photo courtesy Detroit News Collection, Walter P. Reuther Library, Wayne State University
Today, Friday, April 8, marks the 60th anniversary of the final DSR streetcar to run down a Detroit thoroughfare. I should know. I recently participated with Detroit transit historian Ken Schramm in a talk about Detroit’s streetcars at a conference of the Historical Society of Michigan.

Well, actually, I got a few words in. You see, Schramm is the real expert. He wrote the book on Detroit street railways. Literally. And he loves to speak to crowds about Detroit’s old streetcars. You should see him go. While the introductory speaker was getting ready to introduce Schramm last month, the author could hardly contain himself, practically pacing back and forth in the wings. When he was finally unleashed on the audience, he grabbed the podium with both hands and launched right into a fascinating hour-long lecture about the DSR, accompanied by an actual film slideshow. It's something to see.

Since it’s his favorite subject, he’s especially keen on these decennial anniversaries. When we marked the 50th anniversary of the last streetcar with an article, Schramm was among the most important interview subjects. We are lucky to have a few historians of that era left to show just what a huge rail network we had then.

Thanks to the scholarship they’ve helped collect, we know the many reasons the streetcar largely disappeared from U.S. cities: inflation, labor costs, the automobile, popular attitudes, with an able assist from automaker propaganda. (For instance, General Motors’ great vision of the future, Futurama, had nary a streetcar in sight.)

But there’s something deeper and inextricably connected to American culture in the 20th century: the idea that because a technology is new, it must naturally supersede all the other technologies that came before it. Once the futuristic automobile appeared on city streets, many “urban planners” declared that streetcars were “old fashioned” and “obsolete.” One-time head of the Detroit Rapid Transit Commission Sidney D. Waldon called the private automobile “the magic carpet of transportation for all mankind.” (Well, except for children, the blind, the elderly, the poor, etc.)

Bear in mind, streetcar systems weren’t scrapped everywhere. Many European cities did not get rid of their "tram" systems, for instance; instead these systems have been expanded and invested in, and are now some of the largest urban light rail networks in the world. Not all American cities completely gave up their streetcars, and many of those cities didn’t fall as far as Detroit did in the 1970s and 1980s.

This is not to say that removing Detroit’s rail-based transportation system was the sole cause of the city’s decline. Nor is it to say that streetcars are magical conveyances that always bring prosperity in their wake. But our urban rail system was the framework — the circulatory system, if you will — for the city. To remove it and to expect private cars to do the same quality of work is foolish at best, and a destructive fantasy at worst.

These days, people, especially younger folks, are looking at “light rail” with new eyes. Studies show that a lot of younger people who are less likely to be interested in driving a car everywhere are drawn to areas served by many different kinds of transportation. Then there are the dollars and cents: It’s a mode of transportation that’s increasingly seen as doing more than moving people, but raising land values, driving development and helping foster density. For instance, Phoenix Mayor Greg Stanton says the city’s new light rail system helped create 35,000 permanent jobs. Or to see just how completely attitudes have changed, regard how the cabal of Detroit business leaders behind the nascent Q Line, scheduled to begin operation next year, are bathed in buzz over a piddling 3.3-mile “system.”

Given these new perspectives, the 60th anniversary of that last DSR car is an occasion to wonder about what we gave up. What if we hadn’t paved over our rails in the first place? What might have happened if we’d been able to establish a functioning regional transit authority to extend rail lines into the suburbs, pair them with feeder buses, and link the city and the suburbs together? Might it have helped the sprawl that's costing us dearly today? Would we have had more regional agreement and fewer squabbles over development?

But the most disturbing question of all might be: Did we give up our city’s 200-mile-plus streetcar system for any good reason at all? Other than the biases of highly placed “experts”?

In short, did we Detroiters simply sacrifice an entire mode of transportation just to feel modern?