Higher pay and fewer hours mean more jobs for everyone. 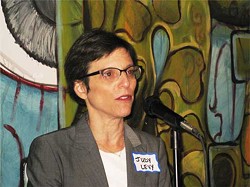 Mention new work to most folks and they think you’re looking for a job, or getting trained for new skills after your old skills became obsolete. Those are fair assumptions, but the new work I’m addressing refers to the philosophy and practices championed by Frithjof Bergman, a retired University of Michigan philosophy professor. Bergman has focused on the sea change in the world economy brought on by technology, and how that affects both how and why people will work in coming years.

New work is definitely a philosophy, which makes it somewhat ephemeral and ahead of the curve for most folks, but there are people in Detroit, and around the world, dedicated to developing the concepts of new work into practical, useful strategies for everyday living.

New works starts from the proposition that the way the economy is organized has changed drastically over the last few decades. Very few things are done the same way they used to get done.

For instance, in the 1940s, the Ford River Rouge Plant employed 100,000 workers — a population that would have counted as one of the 10 biggest cities in Michigan back then (and now). The Rouge compound had its own glassmaking facility and an electrical generation plant; rubber was shipped directly there from Henry Ford’s rubber plantation in South America. Everything necessary to build an automobile was right there. Now, due to technology, the place runs with fewer than 5,000 workers. It didn’t get bigger; it shrank.

The same thing is happening throughout the world of work; it takes fewer people to do almost anything. In the world of newspapers, typesetters, librarians — and even the paperboy who delivers it to your door — have become obsolete. It looks like the paper, itself, is destined to disappear.

Formerly good paying jobs have been offshored to cheap labor markets; pensions and benefits are disappearing — and, for many, work is a series of temporary jobs with little security. The situation becomes exacerbated in a system that pits workers against each other to win steadily diminishing compensation. The result is a great recession that seems more and more permanent, a mortgage crisis that allows banks to be bailed out while families are thrown out in the street, and food has become a commodity for profit-making while the idea of proper nutrition is eliminated from the equation.

“What’s happening in the current economy amounts to things that you could call the Egyptian plagues from the Old Testament,” Bergman says. “We have what I call the butcher split. [It’s] a division between the people who are super-duper well off — more wealthy, more spoiled and more wasteful. At the opposite extreme right now there are about 80 percent of people. I don’t call them poor; I call them desert people. They don’t know where they’re going to sleep and they have to invent what they’re going to do next.”

Bergman and others focused on new work are busy trying to figure out what that next thing will be. There are new work centers in Africa, Europe, the Indian subcontinent and North America. One idea they have developed is how to deal with disappearing jobs. Rather than have people competing with each other for scarce jobs — therefore creating the haves and have nots — they believe that people should work fewer hours and there will be more jobs to go around.

In this scenario, people spend about one-third of their time producing food, energy and the like; one-third doing enterprising things for compensation, and one-third doing what enthuses and energizes them.

“There will be no living from weekend to weekend,” says Blair Evans, director of Incite Focus, a new work lab on Detroit’s east side. “People will engage in energizing rituals.”

Evans is describing an idea that, rather than doing demeaning, dehumanizing tasks all week and waiting for the weekend to do things that really matter to you, new work will engage your mind and spirit on a daily basis.

Incite Focus is a fabricating laboratory, or Fab Lab, with a 3-D printer. These facilities are at the center of how new work promoters expect to create new kinds of community. 3-D printers, or fabricators, make things. In the same way that a printer can produce two-dimensional images on paper, fabricators are programmed to make functional objects out of plastic and cornstarch.

It takes a moment to get your head around the idea that you can “print” a bowl or a cabinet, but it is entirely possible.  Recently, the technology made news when someone posted directions online for how to use a fabricator to make a plastic gun that could pass through a metal detector. Also, a Fab Lab in Austria recently demonstrated that it is possible to fabricate the parts for an easily assembled electric motorcycle.

The fabricator isn’t practical for mass production, but it makes sense for short runs of things without having to retool a factory for it. And it also lends itself to people who want to customize objects for their wants or needs. There are 130 Fab Labs in the world now. Evans says the numbers are doubling every 18 months. At that rate, there will be about 1,400 of them dotting the globe in five years.

The fabricator is but one aspect of the new work vision. Much of the rest of it is less about high-tech applications and more on the humanistic side. New work envisions intentional communities incorporating ecology, agriculture, architecture, appropriate technology, innovative education and other features of human culture. Among the attributes is the development of an affordable 400-square-foot house that is appropriate because there will be community centers where social activities take place. And there is a focus on how people interact.

“People need to shift the way they think and the way they act toward each other,” says Kim Sherrobi, a new-work adherent. “Without that, it’s kind of challenging to do the rest.”

New work is a fairly new thing and its advocates know that they need to start showing people how it works — take it from the world of envisioning and into practical application. That should be coming along soon enough.

Evans says that folks at the Detroit Center for New Work have already procured property for 15-acre and 20-acre developments in Detroit. They are engaging in discussions with residents in the area to determine what is wanted and needed. The idea is to be flexible and tailor specific communities to the people. Evans says each one will have the capacity to fabricate, generate energy and use only the water that falls on the property.

“Almost anything that anybody needs can be produced in the community,” Bergman says, “all of that on a much more human scale.”

I guess we’ll find out soon enough how practical new work is. What we usually see are efforts to patch up an ailing and failing system. It’s a difficult thing to let go of what you know and what has sustained you in the past. The new-work thinkers are ready to let the old ways go and start out anew. That’s something like what the founders of our nation did. They left behind the old to try something new.