The ‘skyscraper curse’ is totally real in Detroit 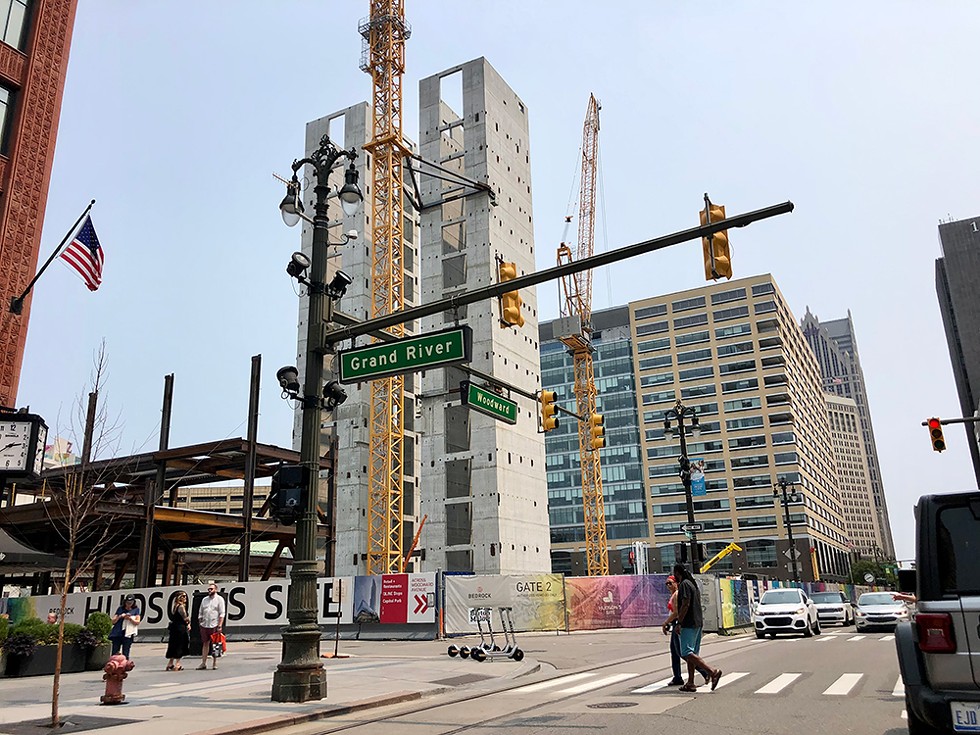 If you’ve been downtown recently, you’ve probably noticed that progress is being made on Dan Gilbert’s new tower, a project that was to build what would be Michigan’s tallest skyscraper on the site of Detroit’s former J.L. Hudson Co. department store.

That progress has been slow, however.

Construction projects like this typically take about four years (see Detroit’s Renaissance Center), although they can be shorter, too (New York’s Empire State Building was completed in just over a year). But as The Detroit Free Press’s JC Reindl recently pointed out, it’s been nearly four years since the Hudson’s site project broke ground, and it doesn’t look anything like the architectural renderings Gilbert’s Bedrock has touted. An initial summer 2022 target completion date for the Hudson’s site main tower has since been extended to late 2024, and now the building may no longer even be the tallest in Michigan, with Bedrock reportedly quietly scaling the plans down to a 49-story structure, shorter than the old Ren Cen’s 73.

It reminded us of another Free Press article from a few years ago — one about the so-called “skyscraper curse.”

First put forth in 1999 by British economist Andrew Lawrence, the skyscraper curse theory states that the construction of new, tallest buildings can be seen as a sort of canary in the coal mine of an overheated economy — and could be a harbinger of an upcoming recession. That’s because the construction of tall buildings typically tracks with the boom-bust cycle of the economy, with stuff that typically precedes an economic downtown — the flow of stupid money — fueling the creation of the new towers. (See: New York City’s Empire State Building and the Great Depression, and Chicago’s Sears Tower and the 1973-75 recession.) By the time projects like these finally get underway or have finished, the economy may be contracting.

Of course, there is a glaring X-factor here: the coronavirus. The emergence of the COVID-19 pandemic has put a strain on the economy, and could explain the slow progress and changed plans for the Hudson’s site project, including supply chain issues and safety protocols for workers. Plus, with the pandemic causing offices to pivot to work-from-home models, downtown areas are unlikely to bounce back to pre-COVID density any time soon, giving Gilbert good reason to dial the project back. Gilbert also suffered a stroke in 2019, reportedly causing some to worry at the time that the projects could be delayed.

However, like America’s other billionaires, Gilbert’s wealth exploded during the pandemic. According to Forbes, Gilbert’s wealth soared to more than $80 billion over the past year, briefly making him one of the 10 wealthiest people on the planet. He then lost a staggering $8.1 billion over the summer when his Rocket Companies failed to meet analyst expectations; now he’s reportedly worth somewhere around $30 billion.

Despite his enormous wealth, Gilbert is paying for the Hudson site project, one of four new projects costing an estimated $2 billion, with help in $618 million in tax incentives, including a generous $192.8 million in brownfield subsidies that capture funds diverted from schools. And according to ProPublica, large swaths of downtown Detroit, where Gilbert owns buildings, were given a huge federal “opportunity zone” tax break intended to help impoverished people after he donated to the Trump inauguration. ProPublica further exposed how the uber-wealthy avoid paying income tax in publishing findings from analyzing a trove of secret documents leaked from the IRS. As the owner of the NBA’s Cleveland Cavaliers, Gilbert was also able to lower his taxable income by about $443 million from 2005 to 2018, ProPublica found, because sports team owners typically report incomes millions below real-world earnings, a sort of economic sleight of hand that allows them to avoid paying millions in taxes. Gilbert’s lawyer told ProPublica that the Cavaliers lose money year after year, at a time when the team won its first-ever NBA championship.

Yet all these tax breaks didn’t seem to help grease the wheels on Gilbert’s downtown Detroit projects; one of them, the Monroe Blocks, appears to be halted indefinitely. (Right now, it’s a drive-in movie theater sponsored by Emagine Entertainment.) Gilbert also recently scrapped plans for a “Detroit Center of Innovation” envisioned on the site of Detroit’s doomed “fail jail,” a project that was also abandoned, after it went wildly over budget.

Gilbert’s grand, scaled-down towers amid an economic downturn have precedent in Detroit. The Fisher Building was initially planned to be one of three towers, one of which was supposed to be even taller, while the Book Tower was also intended to have a taller sister project. The Great Depression foiled both of those plans — apparently the “skyscraper curse” in action.