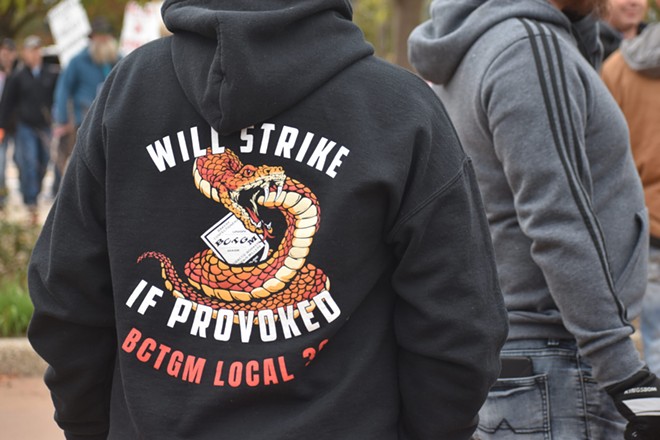 The Kellogg strike encompassing about 1,400 union workers at four cereal plants around the country, including in Battle Creek, is continuing into mid-November after the company’s “last best final offer” to the union expired without a vote and Kellogg says it is seeking new workers.

Workers at the company’s four cereal plants in Michigan, Pennsylvania, Nebraska and Tennessee have been striking against the company’s policies for more than six weeks, as workers brace for a chillier picket line as snow has already begun to fall.

The 325 Bakery, Confectionery, Tobacco Workers and Grain Millers International Union (BCTGM) workers in Battle Creek and their counterparts elsewhere began their strike at midnight Oct. 5 as their master contract with Kellogg expired.

The company has brought in busloads of temporary, out-of-state workers to fill in for the striking workforce, which union members call “scabs.”

According to Kellogg, the company’s final contract offer to the union expired just before noon Nov. 11.

“Unfortunately, the union did not allow a vote,” the company’s website reads. “There are no further negotiations scheduled.

“We have a responsibility to our business, customers and consumers to produce cereal, despite the strike. Operations continue at all four plants with hourly and salaried employees and third-party resources producing food. We are also tapping our global manufacturing network and expertise, and we are currently hiring to fill roles at our plants,” the statement continues.

Ken Hurley, Kellogg’s head of Labor Relations and Supply Chain HR, said in a video on Nov. 9 that the union has “unrealistic demands.”

“We’ve made every attempt to build a bridge toward a new agreement, but those efforts are met with rejections and more unrealistic demands. The union does not seem interested in revising its proposals or exploring creative solutions to resolve these issues,” Hurley said.

“We urge the union to reconsider its approach and agree to engage in real bargaining for a contract to get our employees back to work and back to their lives. And at a minimum, we hope our cereal employees demand that their union put forth our offer for a vote.”

A vote was not taken on the final offer, which had included a more temporary two-tier wage and benefits system, enhanced benefits for all employees and wage increases for both “legacy” and “transitional” employees.

Picketing workers are fighting to get rid of the two-tier wage and benefits system entirely, which they say unfairly devalues newer workers and creates hostility between newer and older workers. They also want better work schedules, as the pandemic has only exacerbated what many characterize as increasingly untenable working hours.

On Friday, Kellogg filed suit against striking workers at its cereal plant in Omaha, Neb., over claims that striking union members were intimidating non-union workers and blocking vehicles from entering and exiting the factory.

Originally published November 18, 2021 on Michigan Advance. It is shared here with permission.