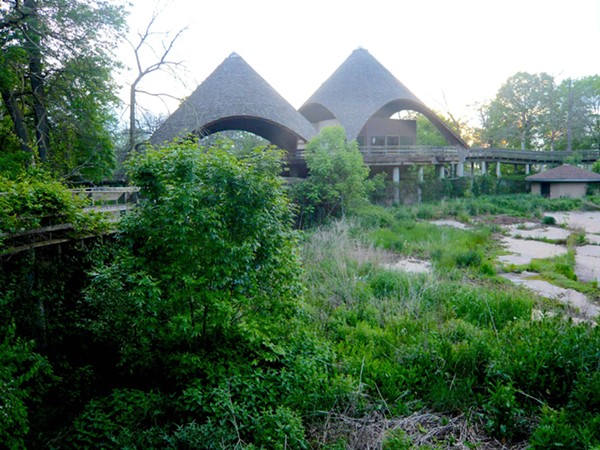 Each year, for about three months, the Detroit Grand Prix turns Belle Isle — Detroit's 982-acre island park — into a construction zone that culminates with tens of thousands of people tearing up the island during race weekend.

There's little regard for its environmental impact, and Grand Prix organizers and the Michigan Department of Natural Resources seem to think that the lack of visible environmental stress means there's no damage.

Related Once again, the Grand Prix tore up Belle Isle, and it's a muddy mess

Once again, the Grand Prix tore up Belle Isle, and it's a muddy mess
By Tom Perkins
News Hits
But Belle Isle holds a deep and diverse habitat for a variety of life, and that's put on display in Detroit visual artist Nicole Macdonald's experimental documentary, A Park For Detroit.

The film, which will be screened on Sunday in Highland Park, includes rare footage of the island's wildlife. It's described on IMDB as using "news footage and surveillance tapes from motion sensor cameras to take a Night at the Museum look at the flora and fauna that are reclaiming the island's abandoned zoo."

So how does the race really impact everything that lives on Belle Isle? No one knows for sure, but that's part of what a what panel led by Macdonald will discuss following the screening.

Attorney: Grand Prix appears to be running on Belle Isle illegally under state law
By Tom Perkins
Bites
According to a press release, "The panel will also include Diane Cheklich, who is on the board of directors of Detroit Audubon and chairs its Conservation Committee; Antonio Rafael Cosme, a Xicano-Boricua educator, writer, farmer, artist, and from Southwest Detroit who the #RaizUp collective; and longtime Detroit resident, birder, and Belle Isle Conservatory volunteer Carol Rhoades. The moderator will be Angela Lugo-Thomas, a local Detroit organizer for GirlTrek, the largest public health nonprofit for African-American women and girls in the U.S."

Belle Isle closed due to overcrowding — it's likely the Grand Prix's fault
By Tom Perkins
News Hits
The event is the first in a series called “Belle Isle: Artists Speak Out,” featuring painters, musicians, and poets sharing their work and thoughts about the island. It's sponsored by Belle Isle Concern, a grassroots citizens group that opposes the Grand Prix’s disruptive presence on Belle Isle.