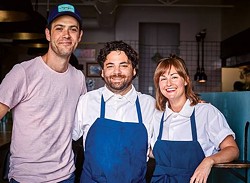 The restaurant – a product of Voyager owner Eli Boyer and its chefs Jennifer Jackson and Justin Tootla – made a splash in July with its concept, which was described as a Wes Anderson-inspired burger joint. On Monday, the team announced the name change in a press release.

The restaurant's press person, Mary Belovich, tells Metro Times that the concept will stay the same, but the new name "reflects the direction Eli, Justin, and Jennifer saw for the restaurant, so it was more of an organic change. They feel that it represents them and what they’re doing at the restaurant better. "

Belovich tells us to expect a "Wes Anderson vibe," but the menu won't be inspired by the filmmaker. Instead, each menu item will have its "own rich story, drawing from their collective culinary experiences and backstories," Belovich says.