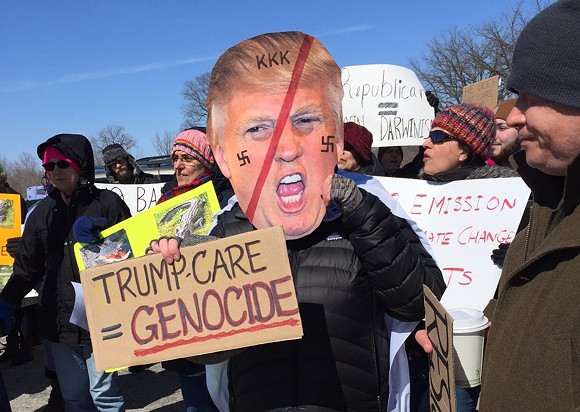 Donald Trump’s first visit to Michigan as president was marked
by a sizable protest and a little mischief on the parts of some of those
involved.

Hundreds of demonstrators carrying a range of clever signs braved temperatures that felt as if they were in the low teens to chant “Trump sucks” to drum beats Wednesday. They’d gathered along a snowy road outside the shuttered GM Willow Run Assembly plant in Ypsilanti Township. Inside the nearby American Center for Mobility, a future autonomous vehicle development facility, Trump was holding a roundtable with auto executives and Environmental Protection Agency Secretary Scott Pruitt.

Trump would later address autoworkers and announce a potential rollback on Obama-era fuel efficiency standards. The president said he would reopen a review of the standards to make things “fair.” Environmental regulations shouldn't hamper business, he intimated.

The potential changes didn’t sit well with the demonstrators, who included Abdul El-Sayed, a former Detroit health director who's running for governor.

“[Trump] has sold us this false dichotomy that tells us you have to
choose between clean air and water and a good economy, but that’s just not true," said El-Sayed. "We could be investing in clean air and clean water technologies right here in Michigan. We have some of the best engineering in the world.”

Among his gripes are Trump's plans to cut the EPA's budget by almost a quarter and eliminate 97 percent of the agency's funding for Great Lakes restoration.

The protest signs painted a doomsday picture of what's at stake should Trump succeed in such efforts. "Auto execs have Grandkids too, keep EPA rules," read one. On another, the words "The earth doesn't have 4 years" were scrawled over an image of smoking skyscrapers.

But the handful of Trump supporters who showed up for the event applauded the possible rollback of fuel efficiency standards, saying it would help carmakers.

"Look what Volkswagen had to do, they cheated, and I'm sure other people have had to cheat as well," said Rob Cortis of Livonia, who showed up to the event in something he calls the "Trump Unity Bridge." 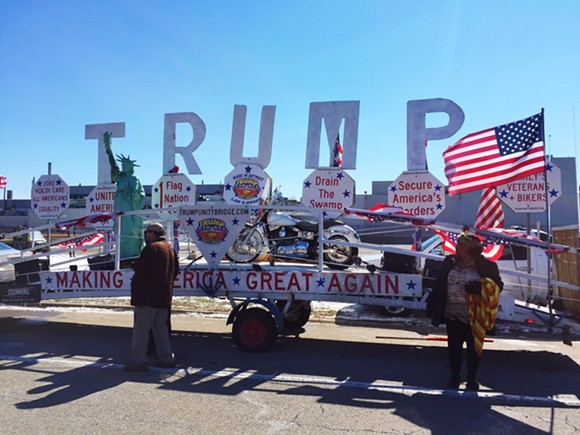 Cortis has towed the bridge that resembles a parade float across more than 17,000 miles of the U.S. since Trump announced he was running for president. But on Wednesday, he says the bridge was compromised when a few protesters nabbed flags off of it and let air out of one of its tires.

Such behavior prompted Washtenaw County Sheriff's deputies to threaten to arrest a young woman. WWJ 950 reports the woman avoided punishment by returning the flag she had stolen.