When a community doesn't want toxic waste, what can MDEQ do? 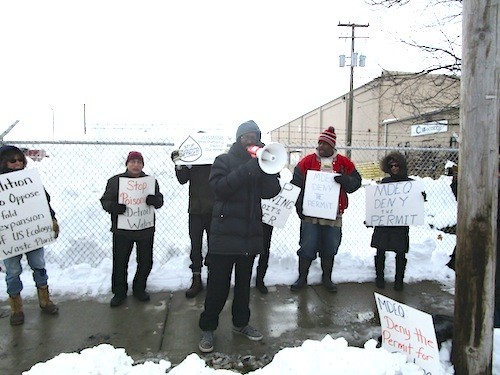 At noon today, the Coalition to Oppose Expansion of US Ecology is meeting at the Georgia Street Community Collective. Last week, we covered their protest outside US Ecology's hazardous waste facility located on Georgia Street.

The reason for that protest was what the coalition called the imminent approval of the company's application to Michigan’s Department of Environmental Quality (MDEQ) proposing a ninefold expansion in waste storage and a threefold expansion in waste treatment. The Detroit Free Press reported that the facility’s new license would “allow it to increase hazardous waste storage there in tanks and containers from 64,000 gallons to nearly 666,000 gallons.”

As we noted, most Michigan residents making comments have blasted the proposal. Of about 350 comments MDEQ received, none was  in favor of the expansion.

But that doesn't necessarily mean the expansion won't be approved by the state department. The coalition says it will likely only be temporarily stalled.

The coalition announced a few days ago that an MDEQ spokesperson has said the timeline will be extended, but added, "At this point we have no reason to deny the permit as it complies with current legislation and legal guidelines."

The coalition then asked how a permit could be approved when US Ecology can't even handle its current load, citing the constant violations. To that, the spokesperson allegedly had no answer.

Critics of MDEQ point out that the agency's role is to be a "partner in economic development" and to approve permits when all the necessary papers have been filed.

On another issue that's less locally keyed, MDEQ has been poised for several months to present Nestlé Waters North America with a permit to pump more than 210 million gallons of water from its PW 101 well in Osceola Township. MDEQ has received more than 13,500 emailed comments, and hasn't found a positive one yet. Similarly, that doesn't necessarily mean the permit will be denied.

What the Coalition Against the Expansion of US Ecology and other critics of MDEQ say they're up against is a tone set at the very top that the department is not about regulating companies' environmental impact so much as maximizing economic investment — so long as all the proper applications are filed.

One knowledgeable person who has aided the coalition's efforts, Nick Leonard of the Great Lakes Environmental Law Center, estimates that the MDEQ has denied perhaps two permits — in the last 10 years.