Remember, Gov. Snyder cares about you so much 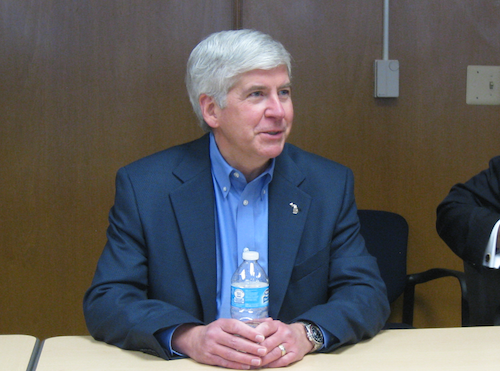 Gosh darn it, we've been hard on Gov. Snyder. Ever since he took office, we've been sort of tough on the old guy, haven't we? Oh, sure, he's given us reasons, such as ramming emergency management legislation down Michiganders' throats over their objections. Then there's the ongoing Flint water crisis, which saw the Snyder administration attempt to discredit whistleblowers and dismiss mounting evidence that his emergency manager's choice to use untreated Flint River water was causing sickness, rashes, and irreversible brain damage to Flint residents.

But week after week, we take heart that the governor really does care about the health and safety of Michiganders. The Department of Licensing and Regulatory Affairs regularly lets us know that the big guy is issuing proclamations to help us all live safe and healthful lives — at least as long as we don't drink the water!

On Sept. 1, just in time for back-to-school warnings, Gov. Snyder issued a proclamation that September is "Campus Fire Safety Month." Isn't that neat? The announcement of the proclamation read, "College students living away from home should take a few minutes to ensure that they are living in a fire safe environment as they start their academic year at Michigan colleges and universities." See? He does care!

On Oct. 7, we received word of another important proclamation from the governor: "Gov. Snyder Proclaims Fire Prevention Week October 9-15." The email read: "Today, Gov. Rick Snyder proclaimed October 9-15 as Fire Prevention Week. This year’s theme is 'Don’t Wait: Check the Date! Replace Smoke Alarms Every 10 Years.'” Do you see a theme beginning to develop in all these proclamations? I do. It's called "caring for your fellow man" especially one endangered by fire — and not, say, toxic tap water.

Oct. 27 brought another dispatch speeding our way, although it wasn't necessarily a proclamation from the governor. But he signed off on this important issuance urging "Safety to Prevent Tree Trimming Fatalities." Did you know that "six tree trimmers have died in Michigan so far this year due to work-related injuries from falls and being struck by falling trees and branches"? That's up from last year. It's also half the number of confirmed deaths from Legionnaire's Disease attributed to the Flint water crisis. But that doesn't mean it's not worth mentioning. It's all about caring about Michigan residents' health and safety, remember?

But this week brought the most stunning proclamation of all. Just 19 hours ago, we were informed that, by proclamation of Gov. Rick Snyder, Nov. 13-19 is officially "Elevator Escalator Safety Awareness Week." It hit us like a thunderclap. Did you know that the state of Michigan has nearly 27,000 elevators and escalators? That this great nation of ours has 900,000 elevators and 35,000 escalators? Amazing!

This governor really cares, down to warning you about small things like a trip-and-fall on the end of an escalator. Don't be distracted by those kids or the smartphone now! The press release announcing the proclamation reads:

“We often take for granted using elevators and escalators routinely as part of our daily life,” said Keith Lambert, director of the Bureau of Construction Codes in the Department of Licensing and Regulatory Affairs (LARA). “I urge citizens to follow a few common sense safety tips to avoid incidents and accidents.”


There are other things we "take for granted" in daily life, assuming that they're safe too. Not just escalators. It's like when you turn on the tap, you expect pure, unpolluted water to come pouring out. It's an issue that, out of 254 proclamations this year, you expect he'd get to.

He gets right to water issues in his proclamation declaring May 2016 "Water Safety Month." Well, it's not really about safe water so much as safety in the water. It's more about "the vital role that swimming and aquatic-related activities play in physical and mental health ... [and enhancing] the quality of life for all people." There's mention of "water safety education" and its role in "preventing drownings and recreational water-related injuries." See? This guy cares!

More to the point is Gov. Snyder's proclamation of June 4 "Great Lakes and Fresh Water Week" warned Michigan residents about ... well, it wasn't really about lead pollution. It was mostly about just how freakin' awesome it is to be around all this water, for drinking, boating, fishing, and more. And it wound up with a strongly worded statement that we should make "an effort to protect and preserve water resources for Michigan’s future" by learning "more about the impact of invasive species in the Great Lakes and other current issues." See? He sort of mentioned lead poisoning. I mean, it is one of those "other current issues."

But, lest you think he didn't mention lead poisoning at all, Oct. 23-29 brought us "Lead Poisoning Prevention Week." It warned that "poisoning by lead-based paint, house dust, soil, water and other sources is preventable." (As Gov. Snyder must be only too well aware, having signed the emergency management legislation without which the Flint water crisis would not have occurred.) It pointed out that "promotion of health, prevention of illness and improved quality of life for all children is a priority of the state of Michigan." (It's just a priority that the administration tried to dismiss and discredit until it couldn't any longer.)

The proclamation reprised the theme of National Lead Poisoning Prevention Week, “Lead-Free Kids for a Healthy Future,” which "focuses on the many ways parents can reduce a child's exposure to lead and prevent its serious health effects," which presumably can include using bottled water or moving the fuck out of your now-worthless house in Flint — and don't forget to pay those bills, folks! Toxically polluted water isn't free!

The proclamation also declared that "public health workers, other health professionals, community organizations, members of business and industry and all others interested play a critical role in ensuring that all citizens — and especially our children — have the opportunity to become healthy, productive people living in a lead-safe community."

See? He's saying it's part of his job (being part of those "all others interested") to play a critical role in ensuring that all citizens can live in a lead-safe community. (We're sure it's just a coincidence that the proclamation was made a couple weeks before a federal judge ordered Lansing to ensure bottled water delivery to Flint residents.)

What's the takeaway? Gov. Snyder cares about a shitload of stuff. Whether it's weatherizing your house, male breast cancer, dwarfism, or the need for diapers, Gov. Snyder's office overflows with proclamations that help raise awareness about a thousand-and-one topics. The governor is truly a compassionate man.