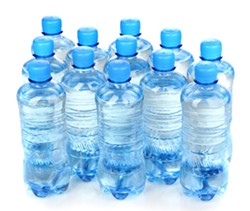 The Federal State of Emergency that President Barack Obama approved for Flint in January is set to expire this coming Sunday.

While some citizens view the Aug. 14 deadline (which was already pushed back four months once) as a source of anxiety — who will ensure water filters and bottled water are distributed and paid for? — officials have reiterated that there is no need to fear: The state is stepping in!

"We have heard from many residents….that there is a deep concern that the federal government and state are going to pack up and pull out of Flint after August 14," Capt. Chris Kelenske, Michigan's deputy director of emergency management and commander in the Michigan State Police, told reporters last Wednesday, according to the Detroit Free Press. "I'm here to tell you that that assumption is completely false."

As Kelenske and others have explained, the aide provided in Flint isn't just going to disappear with the end of the Federal State of Emergency — rather the big shift is in who is footing the bill. With the end of the emergency, the state will now be responsible for all the costs associated with getting clean water to Flint citizens and running the city's eight community stations (the federal government covered 75 percent of the costs, and the state was responsible for 25 percent during the January to August Federal State of Emergency).

With the declaration of the federal emergency, FEMA approved emergency relief, which included water, water filters, filter replacements and water test kits. While federal expenditures are limited to $5 million under the Stafford Act, Congress has the ability to approve additional funding when the $5 million is exhausted. When the House and Senate adjourned in July, however, they had not acted on approving any additional aid.

Currently — over two years after the city of Flint connected to the corrosive Flint River and nearly a year after Gov. Snyder acknowledged there was something wrong with the city's water and ordered the reconnection to Detroit's water system — Flint citizens are being encouraged to still use water filters when using tap water. According to the Detroit Free Press, many, however, "don't trust the city's water supply and opt for bottled water instead." Efforts have been made to re-coat Flint's water lines with a film to stop lead from leaching from the pipes — however, the estimated May 1 date of project completion has come and gone.

The state has yet to release estimates on what they believe the costs will be now that they are fully responsible — financially that is (audible eye roll) — for the aftermath of the Flint water crisis, and ensuring citizens have access to clean water.