A few things I believe about journalism are: With a breaking news story, you simply don't have the facts to make any sound judgments. Another is that you don't make presumptions of guilt or innocence: certainly not for the suspects, but definitely not for the victims.

But just try saying that to some of the bigots commenting on the death of 13-year-old Deontae Mitchell. By all accounts, another suspect has been placed under arrest today, and the manner of his death is still to be determined, but that won't stop the outpouring of dozens of vile, disrespectful comments appearing on stories about the boy's death.

For instance, look at this comment on a Free Press story. 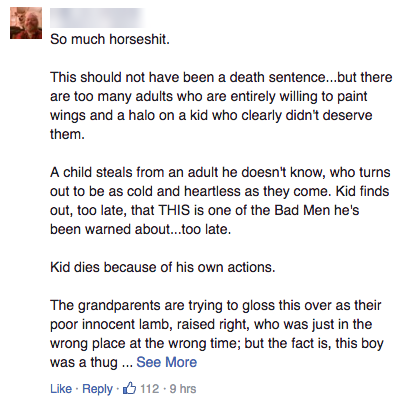 The grandparents are trying to gloss this over as their poor innocent lamb, raised right, who was just in the wrong place at the wrong time; but the fact is, this boy was a thug in the making who was cut down before the process really got started.
A 13 year old who thinks it's appropriate or all right to take cash that isn't his just because he thinks he's faster than the adult? Out running the streets at 10:30 or 11pm?
THIRTEEN YEARS OLD?
No, this was no 'lamb'.

It's important to bear in mind that the details of what exactly went down outside Nino's Party Store are still open to question. The Free Press account describes the "petty crime" of Mitchell swiping money alleged killer Gregory Walker left on the ground while urinating on a wall. But Fox 2 reports that Deontae's cousin Raheem Matthews said "after a man named Gregory Walker dropped money outside, Deontae picked up the cash then, tried to give Walker the money back — but he says Walker refused."

Nevertheless, whether the man dropped the money and Mitchell scooped it up, or whether Mitchell tried to do the right thing, what reasonable person hears about a drunken, angry man waving a gun around and kidnapping a 13-year-old kid and blames the child?

Well, apparently, this commenter does: 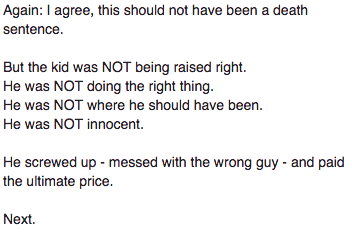 One wonders if this commenter would have said the same things about Grosse Pointe resident Paige Stalker, 16, who was shot in Detroit two years ago. Stalker, you may recall, was white, and was in Detroit with friends when a gunman opened fire on her car, killing her. When a young white person of means is killed, do commenters leap at the opportunity to crab about the quality of their family, their "poor decisions," or to dismiss the entire case with a blasé "next"?

Of course, it may be that Stalker's family, like most families, had its problems. It's certainly more difficult to ascertain the extent of a family's troubles when they have enough wealth to conceal them. But Mitchell and his family had no such protection, and commenters seized upon every morsel of his family's privation and hardship — not to sympathize with the family, but to condemn it: for everything from the late hour he was out to the fact that his extended family provided much of the care.

Talk about "punching down"! The 13-year-old is still fresh on his slab at the morgue, and this commenter is already condemning the child, the family, and Detroit's chief of police, and hasn't expressed one iota of grief or empathy about what happened. Again, would this commenter have had equally harsh words for the family of Stalker, who was killed at 9:15 p.m. — on a school night?

No, probably not. In fact, there's something so obvious here, so revolting, that it's ridiculous that this has to be pointed out: People who greet the news of a dead child with an indictment of his community have already written that community off. Try to peer into the mentality that uses a child's death as grist for further division, and see if you don't find only the ugliest bigotry there.