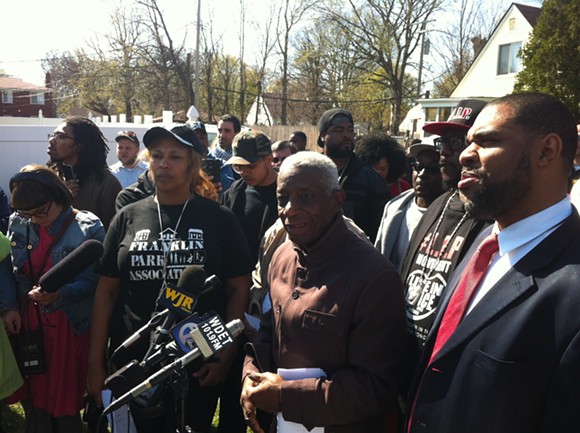 The city of Detroit paid $20,000 in 2000 to settle a lawsuit involving a federal agent who shot and killed a 20-year-old Detroit man this week.

The agent — identified by The Detroit News and Detroit Free Press as U.S. Immigration and Customs Enforcement (ICE) Officer Mitchell Quinn — fatally shot Terrance Kellom on Monday during a raid by a federal task force.

In 2000, Quinn was sued by Detroit resident Trevor Pender for an alleged false arrest and assault and battery, according to the complaint.

On Aug 19. 1998, Pender and his friends were sitting in a parked car outside his mother's Detroit home listening to a cassette, the complaint says. "Without warning," it continues, Quinn and his partner, Officer Eugene Brown, approached the vehicle on the driver's side and asked Pender for his license.

The complaint says Brown ordered Pender to exit his vehicle, put him in a headlock, and said, "I'll snap your fucking neck." When Pender's mother stepped onto her porch to observe the situation, Brown cursed at her and allegedly said, "Just for that, you're going to jail."

While this was going on, Quinn stood idly by, according to the complaint, before ordering the remaining passengers from the vehicle.

"At not time did the Defendants advise the Plaintiff or his friends of the reason for their detainment," the complaint says. "The Defendants then conducted a pat down search of each of the individuals."

Pender was charged with driving without a license, taken to a police station, and held overnight.

The case was settled shortly after the complaint was filed for $20,000, according to a 2000 MT story. City attorney Krystal Crittendon told MT at the time that Brown approached the car because it was parked in the "middle of the street late at night with rap music blaring."

Crittendon told MT that Brown, Quinn, and Pender signed an agreement releasing all parties of any liability and that "the city settled the case because it was cheaper than litigation, particularly with recent media attention surrounding the police department." Pender's attorney, Steve Budaj, had no comment Wednesday on the case, saying it he couldn't recall every detail.

The Kellom family is no stranger to Officer Brown, according to Ron Scott, spokesperson for the Detroit Coalition Against Police Brutality.

"This family has had tragedy in two decades," Scott said earlier Tuesday.

In 2008, Quinn was criminally charged with assault with a dangerous weapon and felony firearm for allegedly pointing his department-issued handgun at his wife, MT confirmed. The case was later dropped due to insufficient evidence. The charges were first reported by the News Wednesday.

Quinn — who was suspended by the Detroit Police Department following the charges and joined ICE months later in 2008 — fatally shot Detroit resident Kellom on Monday, after a multi-agency federal task force executed a search warrant on his home in the 9500 block of Evergreen.

An ICE spokesperson declined comment and said he couldn't confirm Quinn was the agent involved in the incident when asked Wednesday by MT. The officer is a lifelong Detroiter and a 12-year veteran of the Detroit Police Department. He since been placed on administrative leave, the spokesperson said.

Conflicting accounts of what transpired leading up to the death of Kellom have since emerged.

Terrance Kellom's father, Kevin, offered his side of the story Tuesday to reporters. His account directly conflicts with statements from the Detroit Police Department, which on Tuesday said his son brandished a hammer and approached the ICE agent before he was killed.

"My son died with clenched fists," Kellom, 51, said during a press conference at the corner of W. Chicago and Evergreen on Tuesday, and he didn't have a hammer. To the sounds of car horns occasionally blaring at the corner of a jam-packed intersection, a group of 150-200 gathered outside Kellom's home Tuesday afternoon to call attention to the incident.

What's more, Kevin Kellom said the shooting happened around 1:40 p.m. Monday, however the search warrant left at his home was signed at 4:35 p.m.

"They made that search warrant after they assassinated my son," Kellom said.

"We had evidence beyond a reasonable doubt to charge Kellom," said spokeswoman Maria Miller. "After the warrant was signed by a judge the police were authorized to arrest him and take him before a magistrate to be arraigned."

The police must have exigent circumstances to arrest a suspect in a home, she said. But, she added, the incident that lead police to his father's house and the circumstances leading to the officers entering the home is currently under investigation.

Officers entered the home in broad daylight to arrest Kellom, a parole absconder with a felony firearms warrant, said Shanelle Williams, spokesperson for the Detroit Police Department. According to the Michigan Department of Corrections file on Kellom, he fled last August from probation he received for a 2013 concealed weapons offense.

A Detroit police spokesperson couldn't say how many agents were at the scene of the incident Monday; law enforcement officials at the press conference Tuesday estimated six-to-eight officers executed the search warrant, with more arriving after the shooting occurred.

According to DPD spokeswoman Williams, Terrance Kellom was "armed with a hammer" and advanced toward the ICE agent before he was shot. Quinn, a seven-year veteran of the agency, was backing away as he shot Kellom — as many as 10 times, neighbors and family members said — dead.

Kellom was pronounced dead at a hospital shortly after the incident.