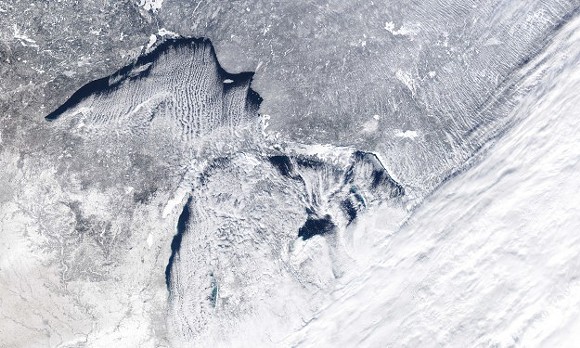 It's been really freaking cold lately, and as a result 94 percent of Lake Erie is covered in ice— that's the highest percentage among all of the Great Lakes and the second highest since 1996 when we were completely frozen over.

Compared to last winter's unforgiving polar vortex, though, this season's been fairly mild; that is, until recently, when temperatures plummeted causing the lake to "flash freeze," as is evidenced by the graph below:

The good news is, mid-February is the peak of lake freezing season, so we're almost out of the woods.

That's not to say we can't squeeze a little enjoyment out of our backyard tundra before we get in to booze cruising season. Really, it can be fun. Just take it from Cleveland Scene staffer Sam Allard who braved the arctic elements last year with local U.S. Coast Guard ice cutters:

Our speed right now is 0.0 knots, which for the uninitiated means we’re stopped, squatting in the ice like a hypothermic otter. It’s early February, and the Great Lakes are 88 percent covered in ice. Lake Erie, where we’re now stalled, is the smallest and shallowest of the lakes and has reached a staggering 96 percent coverage. “Knot,” by the way, is the maritime abbreviation for “Nautical Miles per hour.” The nautical mile is slightly longer than a standard land mile, measuring 2,000 yards compared to 1,670.

For the record, there is nothing visibly nautical about our current location.

If you missed it, catch up on the full feature here.