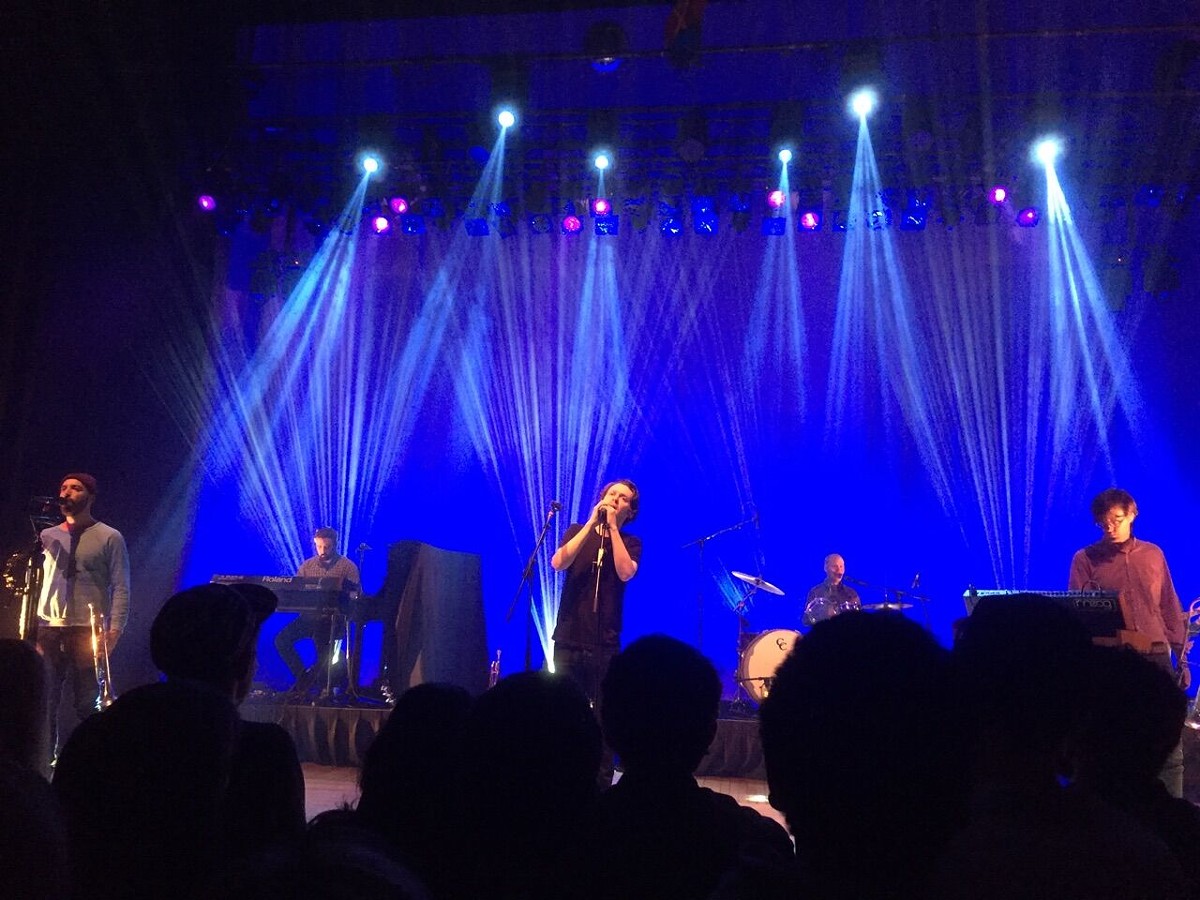 I had never seen Beirut before the other night, (Wednesday, Nov. 11) though I should have. My experience of the mid-to-late aughts was rife with bands with a gypsy/carnival vibe, and Zach Condon's Beirut was the emotional center of that lot. Though I missed him the past times he's come to Detroit, I just imagined him as some distant romantic tumbleweed that would eventually make his way back. "Next time," I'd say, picturing Condon blowing in the wind back to the Balkan Peninsula, or Mexico, or France.

How good it felt, then, to finally see Condon make his way onstage at the Royal Oak Music Theatre, hair disheveled, in need of a shave, trumpet in hand. He took the stage alongside trumpeter Kyle Resnick and trombonist Ben Lanz, creating a brass front line, Aaron Arntz on synthesizer and accordion, Paul Collins on bass, and Nick Petree on drums behind him.

A lot has happened to Condon, a traveler who weaves souvenirs from everywhere he's been into his music, since his debut Gulag Orkestar in 2006, but he still chose to start at the beginning. They opened with "Scenic World," a friendly hello and invitation back into his unique hybrid of sounds. It was the second song, "Elephant Gun," however, that really got a response. The opening ukulele chords sent a joyful tremor through the crowd, who cheered and and swayed with the wistful opening lines, "If I were young, I'd flee this town, I'd bury my dreams underground." Next came "East Harlem," off 2011's The Rip Tide, and finally a new song, the wordless and somewhat somber "As Needed," from the 2015 release No No No.

Condon and Co. continued in this way, jumping around their entire catalog from the earliest gypsy-inspired overtures to the sparse arrangements of their current album. The crowd was much obliged to the mix, happy if not recognizing everything Condon threw their way, and cheering on his single line acknowledging them: "It's been a minute, Michigan," before returning to the music with a mix of world-weariness and bravado. Mid-show highlights included the title track from No No No, during which he cracked what was maybe his first smile of the evening, and "Postcards From Italy," delivered with a cheerful, upbeat tempo that staved off the heavy nostalgia of the album version.

Perhaps due to the brass-heavy set-up, many of the high points of the night were tracks from his March of the Zapotec EP. These songs, which Condon recorded with a 19-piece marching band collective just outside Oaxaca, Mexico, had a distinctive flair and fullness that the mere six musicians onstage successfully upheld. The first played was "The Akara," a number that started impossibly somber, then morphed into a saucy tango. A little while later, "The Shrew" conveyed a similar grandiosity, trumpet and accordion and cymbals banging, to a battle or a funeral, I couldn't tell, but definitely something serious.

The mood lifted a bit after that, with the relatively lighthearted "My Night with the Prostitute From Marseille," the crowd dancing along to the synthesized beats. The pre-encore closer "So Allowed" brought things to a lovely if melancholy place — no busy rhythms or far-reaching influences, just Condon crooning, "I long to say you're mine" over simple keys and soft horns.

For the encore, the band worked their way backward, first with the new track "Pacheco," then all the way to the first track of their first album, The Gulag Orkestar. Second to last was "In the Mausoleum," which at first was hard to identify because there were none of The Flying Club Cup's strings on stage, those parts replaced with Condon and Resnick trading trumpet/flugelhorn licks. The result was a dizzying and drama-filled conversation, which, because it was coming through horns, rang triumphant.

They closed with a graceful, sweeping rendition of "The Flying Club Cup," a song that served as an ellipsis to where Condon will go next. Is he on the verge of another far-flung trip to a different corner of the world, or, will he delve deeper into an already-present aspect of his music? As he waved goodbye Wednesday evening, his guess seemed as good as mine, but there was no doubt it would be an incredible journey.