With his music project the Imaginatron, Steven Pivalsky wants to make you move ‘like an ouija board’ 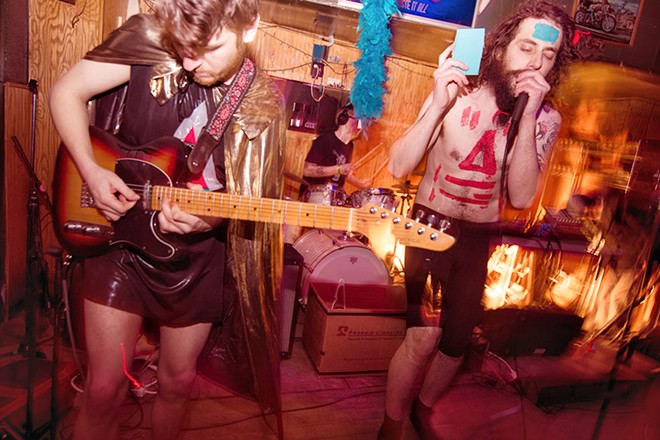 Brian Rozman
The Imaginatron in 2017.

Steven Pivalsky hopes to wake people up, in more ways than one.

The primary catalyst for doing so would be the Imaginatron, which is technically a band, but it’s also an instrument, and possibly even an ambulatory dimension onto itself, too.

But Pivalsky, a longtime Hamtramck resident who’s technically been residing way over on the other side of the world for much of the past year, is also waking people up through coffee roasting; he started out as a barista in Eastern Market several years ago and eventually became director of coffee for Germack, but is now currently working toward making some of his even bigger coffee bean dreams a reality very soon.

“It’s definitely about breaking down the barriers,” Pivalsky says, referring to his proclivity, as a singer (and conjurer?) to spend nearly the entirety of an Imaginatron performance off the stage, weaving around audience members like the instigator of history’s most gentlest mosh pit until he’s essentially loosened up a critical mass of previously stock-still bystanders and coaxed them into joining a sort of dance that feels ceremonial and is conducted entirely by impulse. “There’s this term to explain it that I don’t actually say out loud a lot, but it’s ouigic… like an ouija board?” he says. When you go to an Imaginatron show, whether you stay on the side lines, or if you let yourself get swept up, you’ll nevertheless observe, he says, “these ouigic propulsions to where, at some point, you don’t know who’s moving it anymore.”

If you went to your first Imaginatron show, which could possibly be the one coming up this Saturday at the Old Miami, it would appear as though Pivalsky is the conventional lead singer of a band called the Imaginatron, where he prompts his Korg Electribe sampler to churn out quasi-psychedelic warblings, pulses, and bloops around with the expressive instrumentations of the virtuosic guitarist Nik Landstrom and versatile drummer Dan Paterson. In the live setting, this trio creates something that would almost sound like what a conventional music journalist might describe as being a blend of experimental electro-rock and darkly danceable post-punk, or maybe a deconstructionist-disco. But, frankly it’s weirder, woolier, and distinctly more whimsical than anything ever associated with those genre terms.

The Imaginatron, though, in the simplest terms, is “this all expansive thing that exists at all times, everywhere,” Pivalsky says. “I’ve always tried to be a little more tactile, a little more grounded, and somewhat more coherent when talking about an Imaginatron show versus the actual Imaginatron.”

At this point, you can either conclude that it’s something impenetrably esoteric, or you can decide that you believe in the Imaginatron, “because it’s more so an instrument unto itself,” Pivalsky reiterates. “An instrument that you can play anywhere, anytime, across all realities. The point of it is to get people who are there (at a show) to play it. It’s already there in front of you.

He adds, “And [an Imaginatron show] is a lesson in how to play that instrument. And like any first lesson, let’s say it’s ballet, you’ll be timid at first as you try it out. And then you can even see that in the people who’ve never been to an Imaginatron show, who aren’t sure yet, compared to someone who has seen us before and might already know how to start playing it pretty fast. But there’s also no right way to do it – because we engage with so many different realities, people can play in all these different ways. The intent of the Imaginatron is just to connect us to all possibilities.”

‘Things are starting to come together’

Pivalsky says that “the point of the Imaginatron” was never to be a band, but rather “...a trebuchet that launches us into these other experiences.” And it’s the notion of soul-broadening experiences that overlaps with Pivalsky’s other life, his coffee life, where he’s been traveling through southeast Asia with Thomas J. Ameloot, founder of CoLabOps Coffee & Beverage Training, where they’ve been serving as educators and quality-graders of Arabica coffee beans. This, of course, could be an entirely separate article itself, but the point is that Pivalsky speaks to us while standing in the middle of a bustling night market in Chiang Mai, Thailand, which was just one of his many stops along this educational, coffee-centric tour of his, which also included Tokyo and Laos. (He’s come a long way since Easterm Market, really.)

“There have been so many moments, traveling the world, where I’m just like, what the?” he says. “I was recently in Laos, riding on the back of a motorcycle with a guy who couldn’t speak English, and I couldn’t speak Laotian, but we hung out all day as he took me around to different coffee farms. We didn’t know what we were saying to each other until he showed me a coffee tree and I pointed and said, ‘typica?’ And he shouted, ‘Yes, typica!’ We both looked at each other and laughed, but then started using coffee terminology to connect.”

Pivalsky riffs on that word, connect. “Things are starting to come together,” he says. “Imaginatron and the coffee life are becoming more aligned in a way that I’ve been waiting for, for a long time.” If all goes to plan, Pivalsky and Ameloot will open up a brick and mortar coffee business in Hamtramck by late 2023. But the coffee coincidentally led to other connections, too.

“I played a show in Bangkok the last time I traveled for [coffee quality-grading education], and that’s because I met a dude who ran an electronic music venue there, which, when I saw it — it felt very DIY and felt very Detroit, and felt like home!” he says.

Pivalsky says he was keen to genuinely connect with the music and arts scene in Bangkok, even if his visits there were limited, so he asked this gent if he could play a solo set (just Pivalsky and the drum machine) at his venue – but this guy came back with a counter offer to instead play Bangkok Street Noise, an underground, floating outdoor festival that happened to be coming up. “Definitely that!” Pivalsky shouted.

“But then I saw on social media that [fellow Detroit-based artist] Kirsten Carey [aka Throwaway] posted that she was in Tokyo on a student visa, studying Shamisen [guitar], and that she was going to be in Bangkok that same week and that she would be looking for things to do,” he says. “So I responded, ‘Do you wanna play a show?’” Carey, a fellow traveler, did indeed wind up sitting in on guitar for a very improvisational set with Pivalsky later that week, during a raucous night set, in the middle of the streets of Bangkok.

Now, there’s a theatrical narrative surrounding this weekend’s show at the Old Miami. It seems the Imaginatron has been “acquired by a large corporate entity,” Pivalsky says, and it’s been turned into “the Imaginatron Moving Company.” He added, “I’m actually not technically or legally involved with it, anymore – we have a new front man, this guy named Spazoz. Spazoz is like this entrepreneur who’s expanded his empire to every reality and he’s good at using the Imaginatron in a way that I never really considered – he uses it for profit. He’s really good at moving things from reality to reality. He keeps growing it! He’s expanding, now, even into non-realities!”

That’s the gist of this upcoming show, conceptually speaking. You’ll see the drama of Pivalsky, Landstrom, and Paterson losing any influence whatsoever over the Imaginatron, as it falls into the clutches of a corporate autocrat. “It’s a holiday party that’s mandatory, too,” Pivalsky says. “Everyone in the universe is an employee [of the Imaginatron], so it’s an intergalactic office party. Everybody should be there and, frankly, everyone has to be there…”

But the Imaginatron is not all that you’ll see at the Old Miami this Saturday. Pivalsky reverently remarked upon the “Imaginatron-esque presence of the other high-energy acts also on the lineup,” which includes the punk group Burn Maralago, hip-hop provocateur JP from the HP, and Planet Ant improv specialists Zelkin and Belkkin performing skits between sets.