Will the real John Sinclair please stand up?

James Partridge — the East Coast-bred attorney and blues guitarist who relocated here, wondered aloud, "Why doesn't Ann Arbor have a blues festival?" and then set about recreating one of America's most legendary musical celebrations — says he had heard of John Sinclair. Of course he had. Everyone's heard of John Sinclair.

"The God's honest truth, for the longest time growing up I thought John Sinclair was a fictional character," Partridge admits. "I knew John Lennon wrote a song about him, but he may as well have been Richard Cory," he says, referring to the fabricated factory owner of 19th century poetry who was later immortalized in a Simon and Garfunkel song.

"It wasn't until I learned more about the history and who he was. ... Then you find out he was involved years ago in reviving and running this event that you now think is so iconic," Partridge says. "He just becomes a giant. He's a rock star."

Sinclair, who is totally real, feisty as ever at 76 and performing Saturday afternoon for the 49th anniversary of the Ann Arbor Blues Festival at the Washtenaw Farm Council Fairgrounds, laughs heartily when told of Partridge's perception. Especially because it has happened before.

"Remember a band called Blind Melon?" asks Sinclair, the Michigan native who returned to Detroit from Amsterdam last year. "They moved to New Orleans when I lived there and had recorded an album of John Lennon tributes that included the song, 'John Sinclair.' But they thought it was just some song, you know? Then I met the bass player one day and it blew his mind. He said, 'I had no idea you were a real guy!'"

That kind of thing happens when you are an actual living legend. Poet. Author. Activist. Manager of the MC5. Founding member of the White Panther Party. Foundational contributor to the famed underground paper Fifth Estate. Symbolic touchstone for the counterculture revolution of the 1960s. Sinclair couldn't attend the inaugural Ann Arbor Blues Festival, hailed today as the first "electric" blues festival in North America, in August 1969: He was in prison, serving an oppressive 10-year sentence for marijuana possession that became a worldwide cause célèbre. It sparked the historic 1971 John Sinclair Freedom Rally at Crisler Arena that attracted a host of celebrities, including Lennon and his wife, Yoko Ono.

"I just missed it in '69. I wrote something for the program, but couldn't go to the show," Sinclair ruminates. "It was the greatest blues festival of all time, I think, that first one, just judging from the reports and looking at the bill. Every great living blues artist at the time was there, just incredible. The next year was great, too, but they got swamped out by that Grass Lake Music Festival. It was on the same weekend and about 200,000 people went there. That didn't leave too many for Howlin' Wolf."

Because that 1970 blues show lost money, the University Activity Center at the University of Michigan, which sponsored the festival, disbanded it. The following year, Sinclair, who had been released from prison thanks in large measure to public outcry following the Crisler rally, sought out the man who had organized it, Peter Andrews, to thank him. The two hit it off and decided to go into business together.

"He said, 'One thing I really want to do is revive the Ann Arbor Blues Festival,'" Sinclair recalls. "I said, 'We can do it. And what if we added jazz to it? Then we'd have a chance at two audiences instead of one.'" Thus the short-lived Ann Arbor Blues and Jazz Festival was born. "We got all the artists we could lay our hands on," says Sinclair, "and it worked great. People loved it. All my memories of that time are terrific. I still listen to the recordings all the time."

Bureaucratic entanglements spelled the end of that era, as well as subsequent revival efforts that followed. However, after a hiatus of more than a decade, Partridge swooped in and mounted a successful, slimmed-down version of the blues festival in 2017 with a contemporary-sounding slogan: "Making Ann Arbor Gyrate Again."

With a golden anniversary in sight, Partridge was encouraged to reach out to Sinclair this year and bring the event's history full circle. "I was scared to call him," he admits. "He doesn't know who the hell I am. I'm a nobody. He's not going to talk to me." But local music mavens also were whispering to Sinclair, and the two eventually met.

"I'm glad he's doing it," Sinclair says. "I like it. I'm happy. I think it's a good thing. I mean, we created a nice name for Ann Arbor by having good artists on the festival and he's trying to carry on that tradition."

The festival, featuring such intriguing artists as Benny Turner, Shemekia Copeland, Tosha Owens, and Jake Kershaw, and expanded to a third day indoors Sunday at the Blind Pig, will see Sinclair delivering his lyrical poetry Saturday over the strains of his Blues Scholars. That's a longstanding, loose, revolving collection of standout musicians that this time includes MC5 alumnus Wayne Kramer and Jeff Graham on guitars, Tino Gross on drums, and the dueling saxophones of David McMurray and Johnny Evans. Don Was, the Oak Park High grad, Was (Not Was) co-founder, and Blue Note Records president who frequently credits Sinclair as an early influence, is flying in from the West Coast to play bass.

"I love to perform," Sinclair says. "But you have to ask me. I don't have an agent." The years have been kind to John Sinclair overall, but he relocated to Detroit for — get this — health care. He says multiple foot surgeries over the years have left him unsteady. "I'm being treated at the DMC, in several departments," he says with a laugh. "I've fallen on my face a lot. I'm old and beat-up, but other than that I'm OK." 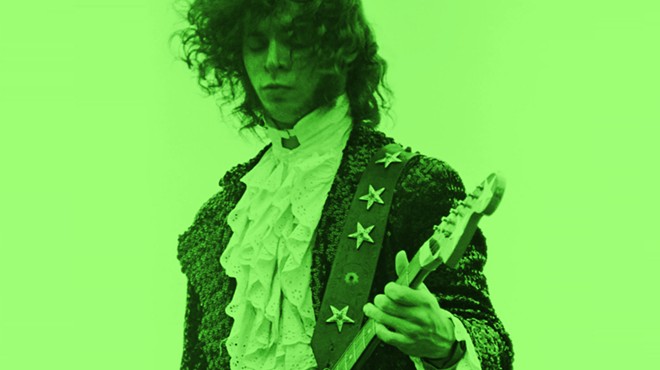 MC5’s Wayne Kramer on the first time he got high

Jim McFarlin, former media and entertainment critic for the Metro Times and The Detroit News, is an award-winning journalist whose work has appeared in People, USA Today, Black Enterprise, HOUR Detroit, and many other publications. His latest book, The Booster, about the decline and fall of U-M’s Fab Five, is...
More
Scroll to read more Local Music articles
Join the Metro Times Press Club