Horse Cave Trio, do things their own way. 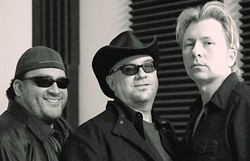 When Bill Haley and Jack Scott were rocking around the clock and burning bridges through the 1950s and ’60s, they couldn’t have imagined what is happening in today’s Detroit rock ’n’ roll scene. It’s likely genres like industrial rock, electro-pop and death metal would mean nothing to them — and garage rock would imply nothing but the very literal definition. Punks were still unfortunate dudes-turned-bitches in prison. It was, simply put, a world away.

However, there are a number of bands today that evoke those days of hot-rod-infused power, sex in a hip-shake, hard guitar and simple tunes; bands that are keeping the spirit of rockabilly alive. Some go the purist route while others, like the Horse Cave Trio, do things their own way.

The Horse Cave Trio, comprised of Ron DeVore (vocals, bass), Lou Simon (guitar) and Tony Bizon (drums), started 10 years ago, when DeVore and Simon discovered a kindred spirit in each other.

“What I wanted to do was kind of a roots rock trio influenced by the Sun sound of Elvis, Jerry Lee, Carl Perkins and those cats, but with a Detroit rock edge,” says DeVore. “That was the original idea. When I first got the guys together, Lou and I wrote an original song — that was the first thing we did. Then we started on some old rockabilly classics … There are so many great bands that do the traditional rockabilly roots rock and they do the songs note for note. That’s great but that’s not what I wanted. I really wanted to do something different, and I really think we’ve achieved that.”

DeVore previously played in a band called the Empty Set, a group that had the MC5’s Michael Davis and The Stooges’ Ron Asheton in its ranks at one time or another. Neither of those great musicians are alive, of course, and so that experience burns bright in DeVore’s mind — generating no small amount of pride, mixed with sadness. However, it is with his latest band that he feels he’s found a natural fit.

“With our CD Curb Service, we decided that we wanted to do all original material,” he says. “The thing we did different to most bands is we didn’t have a specific style. We might have a swing groove or a blues groove, we’d follow that song through and then bring them together with a cohesive sound. With the Curb Service CD, we’ve got a gospel tune, we’ve got straight rockabilly, we’ve got blues and we’ve got swing – there are all [different] kinds of genres but somehow it works with the sound.

“That’s really where we decided that we were coming into our own. We really followed through with the next CD, Hart County. We took that to the next level where we decided to hook up with a real producer [Tino Gross of the Howling Diablos and Funky D Records], go into a studio, bring in some other musicians and make a real studio album.”

The Horse Cave Trio has been battling around for a decade, but it’s really only within the past couple of years that they’ve started to get noticed on a wide-scale measure. DeVore believes this is partly due to the lack of any real rockabilly scene in the Detroit area.

“There’s fewer and fewer places to play, especially for up and coming bands,” he says. “That’s a part of the problem. We were never in that scene; the rockabilly scene didn’t ever really like us. The local scene that first embraced us and really helped us build a strong following was the blues crowd. We started playing at blues clubs and for the blues crowds, and they really understood what we were doing.

“Some of the so-called rockabilly bands wear the 1950s suits and 1950s underwear, and they’ve gotta have the vintage amplifier and a certain guitar, and we were too hard rock for them. We were too bluesy for the real rootsy rockabilly crowd. But when we got in front of a blues crowd, they just ate it up.”

The other key to the band’s success of late should surely go to Funky D Records, a label that seems to have a knack for picking up gifted, talented rock ’n’ roll and blues bands — bands that perhaps were feeling a little road weary, and giving them a shot in the arm, dusting them off and sending them back out, refreshed.

“They’ve gotten us some attention that we weren’t getting,” says DeVore of the label. “For years, we were doing our own thing — self-produced, self-promoted, and about the time that we were thinking about doing a new record, Lou is good buddies with Jimmy Bones because they used to play together … Lou said that we’re thinking about making a new record, and Jimmy said that we have to call Tino [Gross, president of Funky D Records].

“They were doing the label and taking it seriously, and they wanted to push our band. We started recording and it was just perfect. They’ve got so much juice right now with that label. Could he win any more awards? It’s almost ridiculous at this point. Tino has the credentials and he’s great to work with – you couldn’t meet a nicer guy.

“He’s done the work and just being able to go to somebody like him, and have that support and be on a team. The thing that sold me was one of the first things they put out, the Rump Shakers and Chef Chris.”

On Friday, the Horse Cave Trio will play at the Magic Bag in Ferndale with those Howling Diablos, as well as young label-mates the Royal Blackbirds. DeVore is excited to jump back out onto a stage. “High-octane hillbilly rock ’n’ roll,” he says. “We love playing shows with the Diablos, and we’re very excited about the young band, checking them out ... We put it all on the stage and hold nothing back.”