Why jazz trumpeter Allen Dennard marches with Detroit Will Breathe 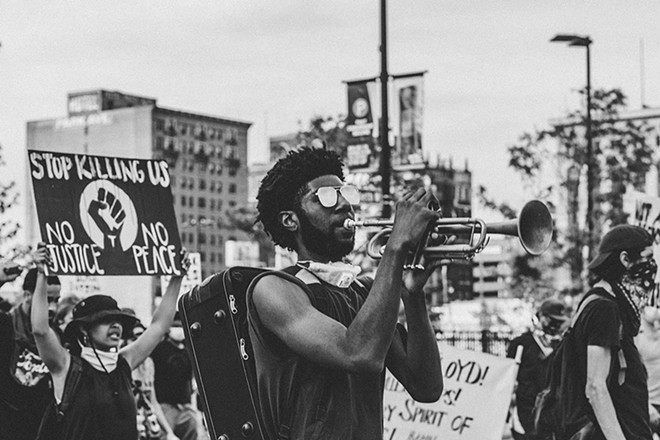 Viola Klocko
Allen Dennard at one of the many Detroit Will Breathe marches he attended this year.

When jazz trumpeter Allen Dennard, 26, started attending the Detroit Will Breathe protests in June, his purpose was to provide music to the protesters' fight for racial justice. Songs such as "Lift Every Voice and Sing" (The Black National Anthem) and "When the Saints Go Marching In" stimulated the protesters as they marched through the streets of Detroit. More than 100 days into the movement, the notes from Dennard's trumpet have stretched beyond echoes in the crowd. His involvement and purpose has grown exponentially to the point of sheer activism.

"It's some heavy weights, but it's worth it," says Dennard. "I'm out there because, for me, that's the bigger picture right now. If Miles Davis is able to get beaten outside of his own venue, his own gig, by a drunken police officer, then anything can happen to me, as well. So this is why I'm doing what I'm doing because there is no musical career for me if I'm dead or incarcerated."

Dennard is a graduate of the University of Michigan’s School of Music. And he has developed into one of Detroit’s rising jazz commodities, having performed with nationally known musicians such as R&B singer Ray J, the MC5, and saxophonist J.D. Allen.

Dennard’s newly founded social activism puts him in the company of a long list of jazz musicians who became activists for social and racial change in the United States. Jazz musicians such as bassist Charles Mingus, singer Nina Simone, saxophonist Archie Shepp, violinist Billy Bang, and drummer Max Roach are well known for making protest records that dealt with the discriminatory practices that took place during the Civil Rights era.

Dennard is serious about the fight.

After attending a number of marches, and giving speeches during some of the protests, Dennard was asked to attend a few organized meetings for Detroit Will Breathe and then asked to join the group.

Detroit Will Breathe was formed shortly after the death of George Floyd at the hands of Minneapolis police to combat racial injustice within the city as part of the larger Black Lives Matter movement. The group has organized more than 100 protests to stand up against police brutality and demand defunding of the police in light of violent police encounters with residents. While there have been a number of run-ins with Detroit police, the protests organized by the group have been largely peaceful, many of which have seen Dennard on the frontlines.

"They call Detroit, like, a safe haven for Black people, but now you got DPD showing their true colors," Dennard says. "There's so much harassment that I've seen since George Floyd in Detroit when it comes to police."

Dennard's passion for activism goes back to high school and wanting to make a change that was bigger than music, and his desire for being involved in advocacy work was further triggered in 2012 after the death of Trayvon Martin. Dennard says he could relate to Martin as a young Black man in America and had a desire to do more. So when Floyd's death triggered more protests within the city, his response was immediate.

"It was like an innate calling. It was a yearning," he says. "And it's a shame that this is still happening today. But at the same time, to be alive in this stage of life, in this era and this new wave of racism, to be able to fight that, for me, is an honor because I've always wanted to be a part of making a change, especially when it comes to racial injustice on Black lives."

Dennard has faced some backlash from musicians in the community over his choice to sacrifice his career for activism, and he's been told that he's putting his life at risk for no reason. His decision to march in the protests has also affected his living situation. His roommate wasn't comfortable with him marching in the protests during COVID, so he decided to move out in order to stay involved. But he's also gotten a lot of support from young musicians who say he's an inspiration to them.

Since the beginning of June, Dennard has been out in the streets protesting for racial equality, rarely missing a day. After about a month into protesting, he started giving speeches and hyping up the crowd alongside the music he was providing.

Recently, Dennard was asked to speak on a panel for the Michigan Democratic Party Black Caucus as a youth representative.

Detroit Will Breathe organizers, such as Sammie Lewis, have noticed the active role Dennard is playing in the movement.

"A lot of people admire him and the wisdom he brings to the movement, but even more outside of 'the streets,'" says Lewis, 23. "Allen's brought the BLM movement to his music life and career; it's really woken up those around him."

Detroit saxophonist De'Sean Jones is another artist who has worked with Dennard and also participated in a few protests following the death of Floyd. Jones considers Dennard a little brother and has shared a unique dialogue with him when it comes to both music and social issues.

"Allen is a leader," Jones says. "He is a part of the face of the next generation of Detroit artists and now activism. So that's a very heavy responsibility to carry."

Jones says the experience has changed Dennard as a person, and that has translated into his playing. "What he's playing now is what he's experiencing on the frontlines. There's a certain level of intensity and deliberate action in his sound which people will connect with."

Marching in the fight for justice has become a second career path for Dennard, as his activism has become just as important as his music.

Dennard was set to release a new album in June, but decided to delay it. He wanted the album to reflect the role of COVID-19 and the current state of social unrest that is radically changing the country for the worse.

"Being in this movement has changed the way I play," Dennard says. "I'm totally thinking of different things now when I solo than I did before I joined Detroit Will Breathe. I'm making music that's a little more sad — not in a depressing way, just like in a way where you can hear and feel the pain that I have been experiencing while being out there in the streets."

Dennard now believes he can be a part of the progression and the continuation of this music in two ways: playing in order to promote Black lives and fighting in the streets against injustice.

As his music evolves, so have his aspirations to become more politically involved. Dennard has no plans to stop organizing protests or being a force for social transformation.

"There's no going back for me," he says. "I'm trying to be one of the people that is [taking action] to make change — and not just talking about it, but being about it. I'm out here truly for the longevity and the equality of Black lives because that's what this is about. This is an obligation. And [there's] no getting out of this skin color for me. So it's a fight that I just feel like I have to fight for." 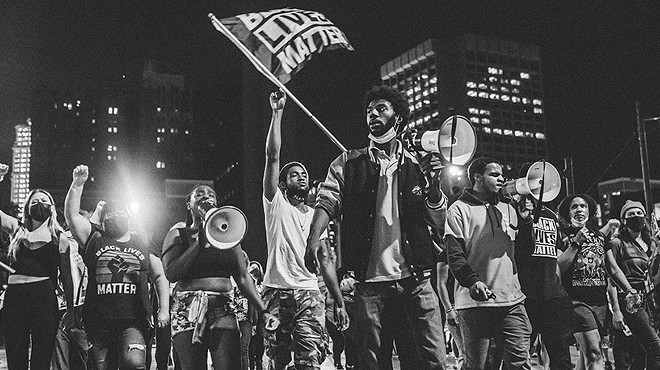