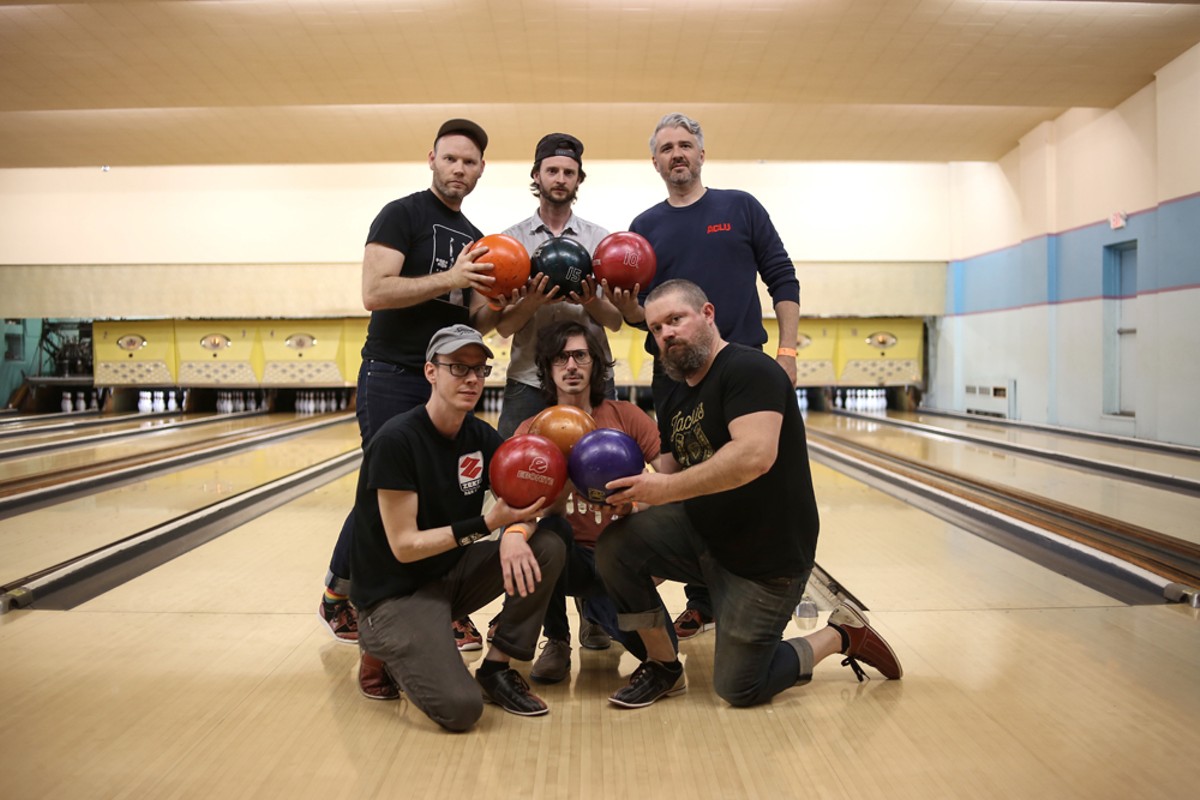 Bars of Gold achieve an intensified harmony. But it goes deeper than the band's music — which is itself gracefully volatile and dissonantly acrobatic in structure, volume, and tempo. Nevertheless — there's a harmony. But much of the band's harmony is more of the familial kind, the bond that, if you forgive the cliché, can only build organically over time like the slow intertwining of tree branches into a canopy sturdy enough to withstand any of life's windstorms.

Trees are probably a poor metaphor for this six-piece, guitar-heavy outfit, since its three albums, and particularly its live concerts, effectively liberate any listener's sense of stagnation (and/or, sometimes, equilibrium). Bars of Gold have been a band for 10 years, and this weekend, they'll be opening for a band that famously lasted for only three: When Wayne Kramer brings the MC5 to life at Saint Andrew's this Friday as part of MC50, BoG will be the opener.

But back to that harmony. "It helps to grow together," says drummer Brandon Moss, looking around at five friends, all of whom have been in each other's lives for more than 20 years. "None of us have been in stasis at any point in our lives, also, so it has helped that we've all been open to just continuing to grow together." 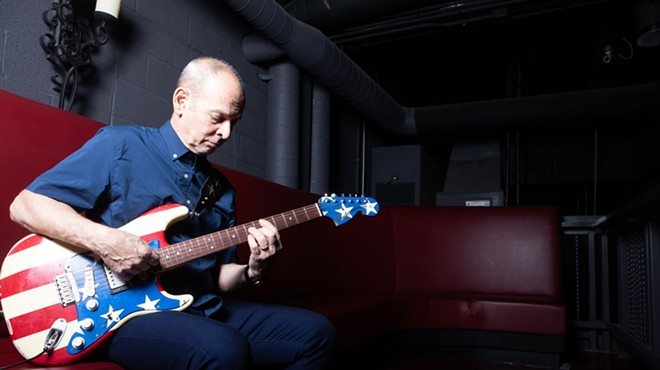 BoG singer and guitarist Marc Paffi concurs that "we're all on the same page, all the time." And while that might sound like another cliché, this one tracks: "We're all gonna do what we can do (for the band), we're all cool with each other, and if anything that comes up is not a unanimous 'fuck yes!' from everybody? Then it's a no! And that's just how it goes."

And after that sentiment is shared, an inevitable inside-joke flies out, which happens about every five minutes with this close-knit crew, this one delivers a potentially fabricated anecdote in which five parts of their six-part gang wanted to collectively buy and refurbish a 1942 Chevy pickup truck, but dropped the proposition entirely when the sixth member reminded them that writing songs should take precedence. And they laugh. And when they laugh together, a warm electricity illuminates even the dusky outside patio where we're chatting, out in front of the New Way Bar in Ferndale. That shared laughter, that knowing laughter, is friendship in musical form.

"Have you heard of being 'Newsteded'?" This is guitarist John Gaviglio's question, referencing the infamous bit of interband hazing that Jason Newsted received from members of Metallica when he joined, jokingly applying it to his entrance into Bars of Gold two years ago. "They gave me the tiniest amp, like one of those battery-powered belt-amps? And I don't even know if I'm on the album anymore... although I did play drums on every track, some people don't know that; Brandon couldn't get 'em right, so I was glad to be there."

This is all, once again, facetious, good-natured bantering, really. And Gaviglio continues with an earnest reply: "Honestly, since the beginning, it has been easy, because I've been playing with [Moss and Paffi] for years, and if I haven't played with them, then we've shared the same 'Highland Spirit.'" Gaviglio is referencing the township where he, along with Moss and Paffi, and BoG's bassist Nick Jones and guitarists Ben Audette and Scotty Iulianelli, all grew up together in the '90s. (And if you're keeping track as you read this article, yes, that does bring Bars of Gold's guitar count up to four.)

Riffing on that phrase, "Highland Spirit," Paffi showily amends it: "Well, you know, it's more of a Kensington Valley Conference type of thing, so not just Highland, but White Lake, Brighton, Waterford..." And then Gaviglio, stringing it right along, adds, "...the M-59 Corridor, really."

One might wonder whether growing up in a more rural area between the comparably more bustling and busy urban centers of Detroit and Ann Arbor led to them being a markedly more voluminous band. "I think it's more just that not a lot of people grow up on dirt roads," says Paffi. And Audette, who's after-school job was wielding machetes with Iulianelli on a Christmas Tree Farm, added that the more wide open spaces of Highland certainly meant that "we could be loud! We didn't have to worry about our neighbors because it was just barns and basements everywhere."

"Are you guys talking about Highland?" Moss asks, rejoining the conversation. When I cross reference "Highland spirit" with Moss, he asks, "Oh, you mean the Highland Panther?" Apparently, back in the late '80s and early '90s, there were sightings of spectral panthers around that area. Paffi wasn't having any of it: "It's a cougar!" Gaviglio: "Well... same family, tho, right?" Paffi: "Not at all." Gaviglio: "Same species? Same genus?" Paffi: "Not a panther! Cougar is not a panther...! Sorry... Jeff, continue with the interview."

The charismatic conversational shenanigans don't stop there, because the next question asks about the specific shift of energy to the guitar playing and the percussive arrangements that distinguish their third album, Shelters, from their previous two releases.

One song, simply titled "Beans," is particularly danceable — albeit in an angular post-punk cartwheeling kind of way. Says Moss: "['Beans'] was actually us trying to replicate a Mystikal song ('Shake Your Ass'). But we took the Mystikal thing and added a James Brown drum riff and smashed them together, and for some reason, it worked. And Marc had some lyrics ready, and he brought them in, and it all just worked, somehow." After a pause, Iulianelli gazes up thoughtfully and then returns with, "Maybe don't mention any of that." They all laugh. "But," Iulianelli rolls on, "[Audette, Gaviglio] and I are kind of playing our guitars as though they are a horn section on 'Beans.'"

Shelters follows 2013's Wheels and the band's 2010 debut Of Gold. If there is a root of James Brown in their music, it's vigorously blended through influences that include Fugazi and, of course, the MC5. Shelters was recorded by Chris Koltay at High Bias in Corktown. And each member assures that finding that aforementioned functional harmony when arranging and recording their songs is all too easy with the cradle of their friendship as a foundation. That said, it also means that they're freed to allow for "some of the more weird stuff" to just naturally happen, Paffi said.

Some of the weirder stuff involves an extended drone in the middle of a track on side two that Iulianelli describes as "a psychedelic Sun Ra part." The song "Plywood to Pine" had added horns from Ray Thompson and Nick Cucinella, and some modular synth from Koltay, along with the already characteristically energetic tempos and thronging guitars under Paffi's signature howl. "It's kind of like our own..." Iulianneli trails off, hesitant, but Moss urges him: "Say it!" And Iulianelli concedes: "It's our 'Starship!'"

By 'Starship,' Iulianelli is talking about the last track on side two of the MC5's Kick Out the Jams. And Moss says "it still doesn't seem real" that they're opening for the MC5 this weekend. Iulianelli remembers opening the email that invited them and he appraised most of their elated reactions as: "pretty dorky." Indeed, of course they're fans, but Gaviglio assures that one definitive trait, a positive trait, of Bars of Gold, is that there is no ego. "We would never presume that we earned this or that we deserve something like this; it's just taken for what it is, which is the coolest thing ever!" he says. "It's the coolest thing ever! And, plus, I don't think any of us have ever played at Saint Andrew's Hall before, so..."

But will they be nervous? "Oh, good lord no," Paffi says, at least speaking for himself. "For me, it's never nerves, but, it's more that I just get crazy excited before any show and I just wanna play, I just wanna go! Let's go!" Gaviglio jokes that he might have been a bit nervous a year ago during his first batch of live shows, learning songs that the rest of the group had been playing for a decade. "If you're nervous, it doesn't show, John!" says Iulianelli, all but patting him on the shoulder. "You fit right in."

And that's what it comes back to, as always: how well this band just fits together. But also applying that harmony to every facet of their band life. "If any one of us needs to take a month off — that's fine," says Gaviglio. "There's no pressure. No one would do this if it wasn't fun. Pressure would just make us all explode. Plus, we all, in our lives, have so much other shit to worry about anyway, so this," he gestures to the five mates seated around him, "has to be fun!" Iulianelli, nodding with a smile, says, "That's a good way to put it."