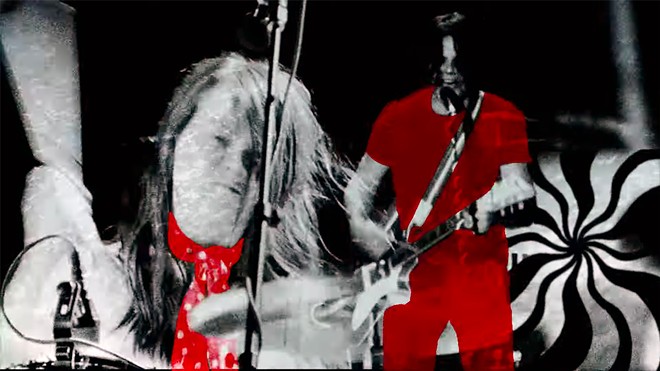 At this point, former Detroit duo the White Stripes are officially a classic rock band — complete with a greatest hits comp and everything.

The group, which formed in 1997 and officially called it quits in 2011, released The White Stripes Greatest Hits on Friday on Third Man Records. To promote the new album, which collects 26 previously released songs, Third Man released a trippy, drippy animated video of the band's first-ever single, "Let's Shake Hands."

The single was originally released on Dave Buick's Detroit-based indie label Italy Records, and it's astounding to look back at how much of the band's DNA was all right there in just a two-song 7-inch single. Beyond the red, white, and black color scheme and peppermint candy motif on the record sleeve, the A-side offers a searing slice of rockabilly, while the B-side is a cover of "Look Me Over Closely," a song written for old-school Hollywood icon Marlene Dietrich by folk musician Terry Gilkyson — an early indication of the eclectic covers and musical styles the scrappy retro-obsessed two-piece would take on.

Anyway, peep the video below.