'When they birthed me, they made a monster': Sheefy walks us through ten tracks on his new album 'Murals'

Sheefy. Courtesy photo.
When Tashif Turner a.k.a. Sheefy McFly first popped on the scene several years ago, everyone said, “What is he going to do?” Now, everyone says, “What can’t he do?”

The muralist and emcee was voted “Best Artist” of 2017 by the people who read this publication, and is on the card for the first time to perform at this year's Movement Electronic Music Festival. Plus also too, he has a solo exhibition called "Move, Bounce, Shake" up at Détroit Is the New Black, which opens tonight, Friday May 26 — all of which celebrates his Murals album release and even a partnership with the high-end yoga-focused chain lululemon athletica.

Whew. In honor of all of this, MT discussed ten cuts with Sheefy off Murals, which was just released earlier this month.

1. “Bars”
Metro Times: Sounds jazzy and a little '70s. I love the line, “Got a queen rolling blunts and panties and tube socks/Sticky in the blunts and stacks in the shoe box. I push payments like a pimp sell pussy/all I eat is Shushi and gourmet pussy.” Where does all that throwback cool come from in your sound and rhymes?
Sheefy McFly: All the "throwback-ness" is just from what I listened to growing up. While making this beat I wanted that vintage, “Roc A Fella/ Dipset” epic sample type of beat. And then adding Mic Phelps and Marvwon dropping bars solidified this song as a legit Michigan Hip-Hop track. I wanted to show that I'm more than an average emcee with this track.

2. “Coney Island”
MT: “Nigga used to call me fag 'cause I was rocking skinnies now them niggas act like they rocking with me” is a dope line. Is there still a tension of older rappers not understating the musical and fashion style of newer rappers in Detroit?
McFly: It’s still tension but it isn't as intense as it was a few years ago. Danny Brown helped ease that pressure of dressing different in the city. I remember walking around the city and people just yelling "FAG" and "GAYBOB" and all types of slurs just because of what I wore. It's just funny now because virtually everyone is wearing tighter clothes. I mean niggas is rocking rompers in the streets now!

3. “Dutchies and Diesel”
MT: Is a very funky throwback track but not really throw back. “Bury me with my MPC/so they don’t do me like they did Jay Dee. They’ll do you skeechy in the 313/act like they love the moment you leave.” Can you explain this verse?
McFly: This track is the first song I made once I was gentrified out of my home in Eastern Market (Long live the Rager Haus!) and I went to Jersey and New York to clear my mind. I was chilling at this studio in Brooklyn and my homie Dusty Fingerz had the beat and I just started writing nonstop. I can tell I was venting about how I felt at the time.

4. “Fraknik”
MT: You brought in the 808 for this one. You went away from the funk/jazzy sound of some of the other cuts. Why?
McFly: Shoutout to my cousin Donnie TAUT for this beat! He brought out that Eastside rapper in me with this one. And Milfie put the icing on the cake with her lyrics. I wanted to make that Detroit summer banger so we had to take it back with the 808s and synths.

5. “Pappy was a Player”
MT: Different approach on the beat here, it actually feels more Detroit trapish in a way. I love the lyrics and the title. Can you tell me what inspired this cut?
McFly: What inspired this song is my momma being a diva and my pops being a player. I feel like when they birthed me, they made a monster. I want this track to be for the bosses and boss ladies.

Sheefy. Courtesy photo.
6. “Holy”
McFly: What’s up with this organ man? Sounds like from a hip-hop version of the Adams Family.
McFly: My homie Jay Norm made this track. I invited him over to hear what I had for the album a few months ago. Then he played me the instrumental and an idea for the lyrics as far as cadence. So I just added my Sheefy-ness to birth a banger. This is probably one of my top five tracks for this album.

7. “Love Me Not”
MT: This is about a failed relationship. Nice melodic tune also, was this based on a true story?
McFly: My homie Crate Digga made this beat I told him I needed that mellow Slum Village vibe and he knocked it out. And yeah it's based on true events. It felt good getting them off of my chest, sometimes you gotta’ vent about love lost.

8. “Raw Shit”
MT: You previously released this. Always good to hear you and Chavis together. How do you like working with him?
McFly: Me and Chavis damn near brothers we've known each other for years. Its dope that we’re working on music now, we both come from the Eastside just with different flows. I feel like we damn near have a Method Man and Redman energy together on the track. And Hir-O killed it with the soulful sample and boom bap feel on the beat.

9. “Euros”
MT: This is a nice subtle use of the keys and cool baseline. Who else is rapping? You drop a lot of witty one-liners. It seems like you you’re really have your egoish lyrical sword out.
McFly: Shoutout the OG Phat Kat for dropping them bars! I saw him at the gas station while buying blunts last fall and he hit me with the, "Lets work!" So I made a beat ASAP and sent it his way. This is the song that actually inspired me to make "MURALS." And I feel like my slow flow is my best flow, that's when I feel myself the most. I wanted to play it real cool on this one.”

10. “Zoot Suit”
MT: Funk from more of a heavy synthesized Zappish type approach here. You speak on the ladies a lot. “Came straight from the block where them chopper be blazin’/hoe’s say I ain’t shit but that dick game amazing.” What’s up with you and the ladies, man? I think it’s the topic you rap about the most? Is it all personal or are you playing vintage old school mac role?
McFly: Man, I've had a lot of experiences with the ladies.... It's all personal, though. I don't lie in my raps; that’s a sin to me. I don't sell drugs, kill people, or shoot guns, so I don't rap about that. But I do smoke weed, paint, chill with the babes, and hustle. So that pretty much is all I rap about [laughs]. 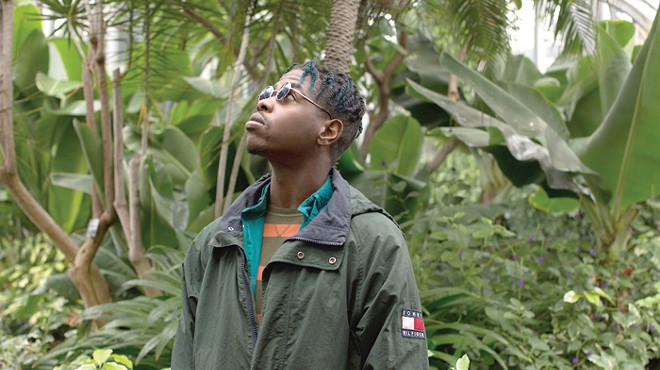 Sheefy McFly readies his first vinyl release, and the next ‘Air Up There’ showcase, and some other stuff: Art of the hustle