Too much too soon

It ain't rocket science for the dudes of 455 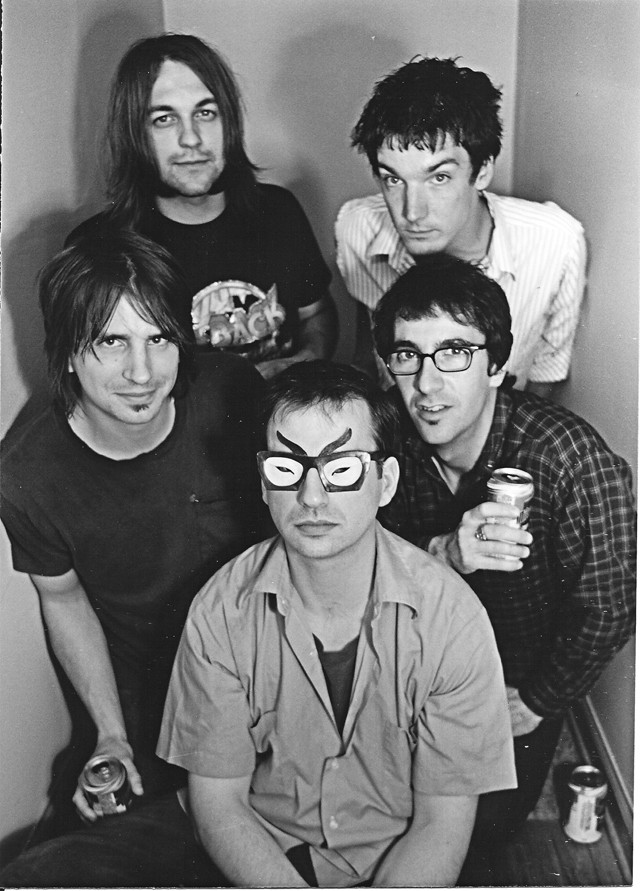 Too much too soon

It ain't rocket science for the dudes of 455

"We'd like to start by thanking the Metro Times for finally putting us on the cover," says Rocket 455 guitarist Marco Delicato, with more than a hint of a smile on his face. He's half joking, but he's also definitely half serious. You see, Rocket 455 was criminally ignored by the press and by most of Detroit's music fans for the decade-plus that they were around from '91. Consider them Detroit's best-kept rock 'n' roll secret, never mentioned in the same breath with the Detroit Cobras, or even the White Stripes.

They were, however, the band that all of the other bands loved, or considered an influence, and though the guys claim that's enough, the fire with which they talk about their latest reunion suggests that they have unfinished business to attend to.

Rocket 455 formed from the ashes of a band called the Nervobeats, when guitarist Jeff Meier, vocalist Mark Walz and bassist Tim O'Connell began jamming with Delicato (who originally played drums but later switched to guitar) and Gories guitarist Dan Kroha. Over the years, Kroha would leave for the Demolition Doll Rods, Bootsey X joined and then left to start the Lovemasters and Tom Lynch would come in on bass before leaving to join the Dirtbombs. The lineup that disbanded on New Year's Eve '99 — oh, just a couple years too soon — and is reforming now consists of Meier, Walz, Delicato, bassist Steve Nawara (Electric Six, Cobras) and drummer Kenny Tudrick (Kid Rock, Cobras, Canon, etc.), and it is widely considered to be the strongest incarnation of the band, not least by the band itself. "Things really picked up then," Walz says of the band's last official lineup. "Getting Kenny in. Nawara was in the Wildbunch [later Electric 6] at the time, but they had just started and didn't know what the hell they were doing. That was the last and final lineup, and in my mind the greatest lineup."

I meet with Delicato, Meier and Walz at the former's beautiful Bloomfield home, and we talk on the patio outside while two of their wives sit by the pool behind us. It couldn't be a more idyllic picture of suburban bliss, and that provides a fantastic contrast to the caustic, gloriously messy garage-punk that these guys make. It's also a long way from the Cass Corridor, in vibe if not geography.

"We were a Cass Corridor band for sure," Meier says. "That was our headquarters, that area. I don't think there was anything remotely like what we were doing going on. Maybe Dark Carnival or something, but those guys were way older than us. Nobody our age was playing rock 'n' roll. They were all playing whatever was popular. One year it'd be U2. The next year REM. The next year INXS. We came after the paisley underground stuff like the Hysteric Narcotics. We always liked them, but they were over with. The Gories were over with. There was not much happening. It was pretty bleak. Not many like-minded people. There was more stuff happening in Ann Arbor and Ypsi at the time. Garage stuff like the Hentchmen was all around Ann Arbor. There wasn't shit going on in Detroit that I recall."

Rocket 455 soon sorted out that situation. Like-minded souls that saw them in their prime, from Trash Brat Ricky Rat to Jack White, swear that they are one of the best hi-energy rock 'n' roll bands to have come out of Detroit post-1990, if not ever. They knew how to rip shit up, both on and off stage. "During that whole time, we were one of the hardest-drinking bands, along with the Hentchmen, in Detroit," Walz adds. "We played the Magic Bag with the Hentchmen and the Wildbunch on a Friday and they sold out of half of their beer for their entire weekend. Quite an accomplishment. Then they wouldn't pay us jack shit, and the place was pretty much sold out."

"The best show I think we ever played, I don't remember," Meier says, sipping white wine and eating salmon that Delicato cooked up. "We were playing with the Neckbones from Mississippi. They're one of my favorite bands ever. We played a couple of shows with them around the Midwest. I remember some of the shows, but the one in Detroit — the bass player was a big pill-head. We were partying for a few days straight, and right before I went on stage he said, 'Take one of these,' and it was valium. I remember starting the show, and I remember sitting on my amp at the end of the show and being pretty normal, carrying my stuff out and going home, but the whole show I don't remember at all. I guess I hit Dave Buick [the Go, Italy Records] in the face because he called the next day apologizing for whatever he had said or done. I don't remember any of it. There were naked girls involved and torn shirts. We don't indulge that way anymore."

Still, timing is everything in life, and a series of crap decisions meant that they were all but finished with by the time the Detroit garage explosion threatened the world. Delicato got a taste of it with the Paybacks, and Nawara certainly got his minutes of fame with the Electric 6. Meier was in the first lineup of the Detroit Cobras, though they'd split up by the time the debut album started to get international attention. "Nobody in Detroit plays to make it," Delicato says. "There's this history in Rocket of everyone being in two bands. It's a Detroit thing — everyone had to be in two bands or you weren't working hard enough. That's still true."

"To be honest, I wasn't too keen on the whole Detroit explosion," says Meier, about 75 percent convincingly. "Things changed around Detroit and not for the better, in my opinion. It didn't break my heart not to be part of that. There's never been that goal with Rocket to be a big rock-star act. I think we've been successful doing what we do, which is just playing shows and having fun."

Walz smiles and drags from his cigarette. "I think we did a service to the rest of the bands in Detroit by staying out of the scene and allowing them to tour without us overshadowing anybody. There was some friendly competition amongst the bands to try to kick ass. We didn't play the game the way everyone else did. The White Stripes got PR and did that angle right. The Go got a manager at some point. Everyone started trying to book tours at that point. ... Anyway, we weren't the best musicians, but we let it all hang out at every show. We had heart."

Delicato agrees. "During the Gold Dollar era, Rocket 455's focus was on having a good live performance, getting 75 to 100 people good and riled up," the guitarist says. "That's what we concentrated on. Steve and Ken were integral — an awesome rhythm section. With Steve and Ken behind you, the three of us could completely fail and it still sounded great. There were plenty of shows where we would all walk on stage stone sober and walk off totally shit-faced. That came through in the shows. We led the crowd in terms of partying and having fun."

So that, apparently, was that. After a series of 45s and EPs that were eventually compiled by Get Hip Records into the 2001 Go to Hell album, the band split at the end of '99 and played a couple of reunion shows over the following two years. Then, 10 years of nothing, until now.

"In 2008, we had a band called Exit Eyes," Delicato says. "We played just three shows, and that was Jeff, Mark and myself. Fast-forward to 2011. Jeff came to us with an opportunity for Rocket 455 to play. We got together and practiced and it sounded better than when we played last. We all still like each other and like playing, and we're fortunate to have found a group of people that still like us."

That's true. History has certainly been kind to the band, if not financially, then in terms of stature. People too young to have seen Rocket have heard stories of rock 'n' roll greatness — how they were the shoulda-coulda band, who influenced many in their wake, who broke up too soon — and that has helped turn the forthcoming reunion show into an event. "I think there's a lot of people that were too young to have seen us, but read about Jack White talking about us," Meier says. "That might have something to do with the excitement. I don't think it's going to be a rehashing of old memories or anything. We've got a bunch of new stuff we want to do, a bunch of old stuff that hopefully we'll play better than we used to."