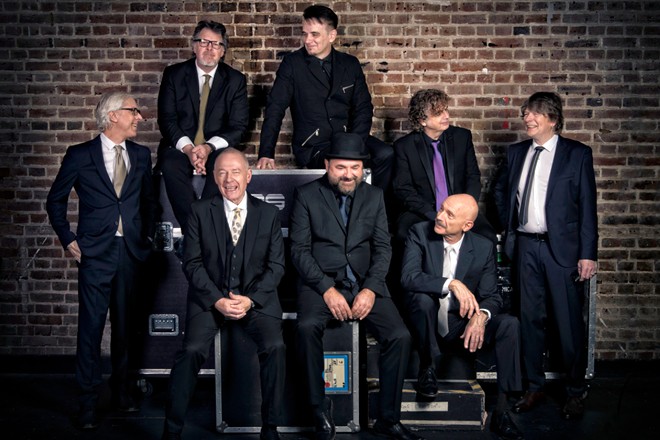 Calling all 21st century schizoid people: this may be your last chance to catch the gods of prog rock in concert, in the states, anyway.

“Management has said it’s very unlikely we’ll be back in America,” Crimson’s Jakko Jaksyzk revealed ahead of the tour. “I think they thought announcing it as a kind of farewell tour was a tacky device, and something you end up potentially regretting if you change your mind. But in essence, as I understand it, this’ll be the last time we play here.”

This news for prog rock fans is as if the night sky suddenly was void of stars, in other words,”Starless.” Sigh. Well, before we sacrifice ourselves in the “Court of the Crimson King,” the “Music Is Our Friend” tour finds lead guitarist and Crimson co-founder Robert Fripp joined by bassist Tony Levin, multi-instrumentalist Mel Collins, drummers Pat Mastelotto, Gavin Harrison, and Jeremy Stacey, and vocalist/multi-instrumentalist Jaksyzk.

For most, King Crimson is as notorious for being a turnstile of membership and hiatus as they are for their meticulous mastery of anti-gravitational arrangements, an ouroboros of rapture and climax. King Crimson has never been anything but ambitious. Just look at “benign dictator” Fripp, who has kept us wildly entertained during the pandemic when he and his wife of 35 years, Toyah Wilcox launched a YouTube series where they titillatingly cover hit songs by Nirvana, David Bowie, Foo Fighters, Guns N’ Roses, Metallica, and Britney Spears.