Thirty years after his death, Roy Orbison visits Detroit as a ‘hologram’ 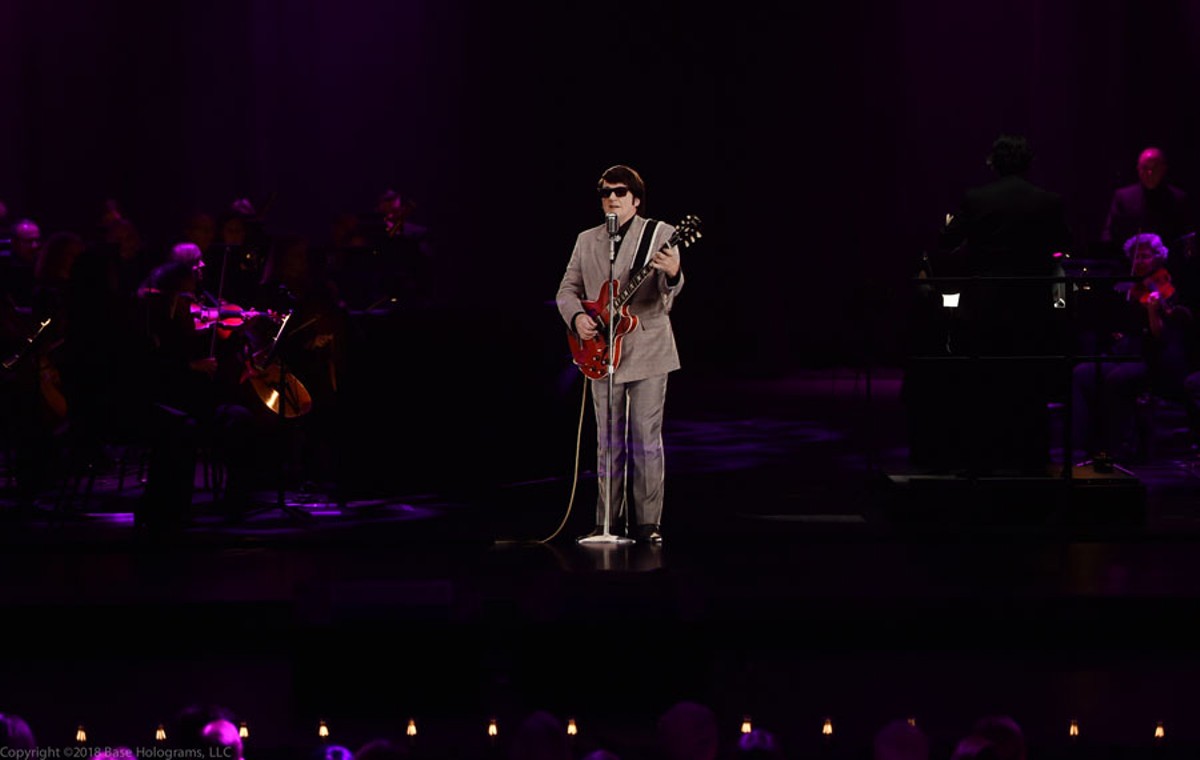 The last time the world saw Tupac Shakur was in 2012 when he appeared on stage with Dr. Dre and Snoop Dogg at the Coachella music festival in Indio, Calif. At that time, Tupac had been dead for 15 years after famously suffering a series of gunshot wounds he sustained during a drive-by shooting in Las Vegas. Yet, there he was, commanding a crowd of 80,000 people, "THUG LIFE" tattoo and all — revived as a "hologram."

"No one lives forever anyway," Tupac says on 1995's "Death Around the Corner." Respectfully, we have reason to disagree, as 2018 marks the first full-fledged world tour of a holographic dead singer — a new era for the dearly departed.

Following a successful European run earlier this year, one of the most transcendent voices in rock 'n' roll history has quite literally transcended death. Thirty years after his death, Traveling Wilburys-era Roy Orbison is on the road, performing music as a hologram. "In Dreams: Roy Orbison in Concert" features a rousing 16 song "hit parade" with a 31-piece live, non-holographic orchestra accompanying the holo-man of the hour, who — spoiler alert — emerges through the stage floor with a red Gibson guitar and his signature eyewear.

Naturally, we have many questions. Among them: Why Roy Orbison?

"We decided that we wanted to have somebody that was an icon and whose music is still accessible on a broad basis," explains Marty Tudor, CEO of Base Holograms — the production company behind the In Dreams tour. "I would be willing to bet you that if you actually counted the number of times you hear a Roy Orbison song like 'Pretty Woman,' or 'Crying,' or 'Only the Lonely,' versus the number of times, say, you hear a Beyoncé song out in the world, I would venture to say you hear Roy more often."

OK, while that may be true, Beyoncé is also, in fact, still alive (and has 25 million monthly listeners to Orbison's 3 million). Tudor believes tours like this are the next wave of exposure for a younger generation who may have missed out on being able to see Orbison and other dearly departed artists live. Some critics, however, find the holographic tribute to be creepy, going as far to call it a nonconsensual cash-grab. But Tudor assures that Base's technological resurrection wizardry remains entirely in the hands of the artist's estate.

"We rely on the estates, as it's their job to police how the image is used and how their legacy is maintained," he says. "We want to be as authentic and true to the artist as possible. The last thing we want to do is portray somebody in a way that they never would have wanted to be portrayed. Now, in the case of Roy Orbison, Roy was kind of a techno-nerd according to his sons. So, they say he would have loved this. We have to trust in that."

Orbison, who died of a heart attack in 1988 at the age of 52, likely saw his fair share of technological advances over his life, but probably had no idea that he would posthumously receive a far more advanced holographic treatment than the likes of Princess Leia in 1977's Star Wars: A New Hope, a film of which he was reportedly a fan. But how can an artist sign off on usage rights to a technology that doesn't exist yet? Again, Tudor defers to the authority of the artist's loved ones.

"There are definitely examples of people who sold all their rights, not foreseeing the negative repercussions, and what we've learned is not to sell under any circumstances," Orbison's son Alex, who is also president of Orbison's estate, told Billboard earlier this year. "We want to share and spread music as an art, but we also always tell ourselves 'never bet against Orbison.' We're very proud of that."

In addition to Orbison, Base is also working on reanimating Amy Winehouse and opera singer Maria Callas. But according to Tudor, not every estate approached is so hip to the idea. Prince's estate turned down a collaboration with Base and, unsurprisingly, there is a growing number of naysayers when it comes to this technology.

Recently, Mike Shinoda of Linkin Park voiced his disapproval against the use of holograms to honor the late Chester Bennington, saying, "For any of you guys who have lost a loved one, best friend, family member, can you imagine having a hologram of them? Awful. I can't do it." Adrien Belew also pulled out of performing with a Frank Zappa hologram, calling the ordeal "far too caustic and divisive." Whitney Houston's estate is also toying with the idea, but executor Pat Houston revoked production rights in 2016 after claiming the "hologram was not ready to air."

According to the description of the tour on its website, you will "clap your hands numb as [Orbison] interacts with the other musicians." What Orbison will not do, however, is interact with the audience — not because he can't, Tudor says, but because, well, it would be out of character for him.

"He never spoke to the audience," Tudor says. "We're only doing what Roy did. I mean, I could make Roy do backflips if I wanted to, but that's not the kind of performer Roy was."

The process to perfect a hologram tour of this scope is lengthy and elaborate, Tudor says, estimating a year to complete and "millions and millions" of dollars. But a hologram could conceivably perform in multiple cities at the same time, which could aid in Base's financial sustainability, something Digital Domain — the tech company behind the Tupac performance — failed to do as they filed for bankruptcy shortly after Coachella.

"A lot of our team comes out of the rock 'n' roll world. So, we followed that format," he says. "It's interesting, too, because it takes all kinds of different disciplines — filmmaking, music, live audio, live stage, and show disciplines — and melds all these different areas together. It's a challenge but it's really cool."

It should be noted that the technology isn't technically a hologram. A typical hologram is a 3-D image formed with a laser. The technology used by Base is a 2-D image projected onto a screen that is invisible to the audience. But as for the future of the technology, Tudor believes the Orbison tour is just the tip of the iceberg.

"I think you are going to see this in your home," he says. "You're going to be able to create holograms of loved ones. You'll be able to record them before they pass and then play it back. I definitely believe that."

In terms of public perception, the jury is still out. "This is as good as seeing him in person as you'll ever get," 71-year-old Ray Sadowski told the Los Angeles Times following Orbison's Wiltern Theatre performance. Professor and Department of English director for Arizona State University Peter Lehman wrote that Orbison's mysterious, enigmatic persona is "an ideal avatar for this new form of music."

Meanwhile, Twitter user @TotalFuckGay had this to say: "Even ghosts are touring. 'Life' isn't 'live' anymore and hasn't been for a long time. With that said, you're really going to see a hologram perform? Have fun putting more money in corporate pockets as underground artists starve." And user @TheDragoEffect quoted Jurassic Park to express his thoughts: "Your scientists were so preoccupied with whether or not they could, they didn't stop to think if they should."

Though the tour's Oct. 1 show in Oakland, Calif., was mysteriously canceled due to scheduling conflicts (the Twitter-sphere speculated low ticket sales as the cause), the show continues to attract real people with real questions.

"Well, I have been asked, 'You know, don't you think this was a little eerie, resurrecting dead people?'" Tudor admits. "When you're in the movie theater and you're watching, say, Marilyn Monroe in Some Like It Hot or Jimmy Stewart in Rear Window, you don't think that's strange or eerie, right? It's the same thing. This is exactly the same thing."