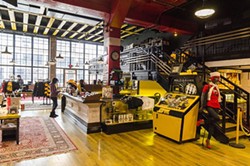 MT photo.
Those looking to help the less fortunate, through food or monetary donations, have two weeks to make donations to the Third Man Records Turkey Drive. The record company held turkey drives for the Nashville Rescue Mission so less-fortunate families could have food for the holidays and they are expanding on that success in Detroit.

The Detroit Rescue Mission Ministries partnered with Third Man Records and is asking for donations of a fresh or frozen turkey and/or three of the following items: cranberry sauce, green beans, corn, mixed vegetables, cornbread mix, cheddar cheese, dinner rolls, sausage, coffee, dessert pie, stuffing, sugar, or coffee creamer.  Donations can be taken directly to the DRMM, 150 Stimson St. Detroit, MI, during business hours. They will provide you with a receipt of donation which could be used at Third Man Records for an immediate 10 percent off any purchase and a free 7-inch vinyl of your choosing.

A Thanksgiving Prize Pack - a Jack White Acoustic Recordings (1998-2016) white label promo, a special edition Total Chaos Iggy Pop biography (complete with limited edition, exclusive 7" vinyl) and a tricolor 7" vinyl to be announced later - will be raffled off, in Detroit and Nashville, to donors. Anyone wanting to donate to both missions can drop off food to the Detroit mission and donate to the Nashville mission online.  Online donations of $15, or more, made to the mission are eligible to win the prize pack.

Third Man Records was launched by artist Jack White in 2001. The company completed its first physical location and headquarters in Tennessee (2009) and opened its second store in Detroit last year.

"Help us provide a little help for the disadvantaged..." the company said in a statement. "Tis the season, after all, and we need to be there for each other now more than ever."