THE WONDER TWINS AT THE SILENT YEARS' PARTY...

The Wonder Twins, aka D’Anne and Laura Witkowski, spent their Saturday evening at the Magic Bag in Ferndale, reveling in the enchantment that was the Silent Years’ CD release party. And what a party it was, with Mann and Quail, These United States and Deastro rounding out the bill!

L: I hadn’t been to the Magic Bag in a long time. I really like that venue. Their staff is incredibly nice and helpful.

D: You’re just saying that because they believed your story about being on the guest list.

L: I really was supposed to be on the guest list. The lady from Magnum PR promised me.

D: I think you mean Magnum P.I. And Tom Selleck is a dude, not a lady. One word: mustache.

L: Well, I’ve never seen her. So I have no idea if she has a mustache. We’ve only emailed. Besides, thanks to Fabian [Halabou, Silent Years guitarist] and the nice folks at the Bag, we got it straightened out.

D: Enough about your sad life. Let’s talk about the show. I took notes.

L: You would. What did you write?

D: Let’s see... For Manna and Quail, I wrote, “Cute boys” and that they could be the guest band on The O.C. The bassist was totally rocking the maroon polo shirt and the lead guitarist knew how to work his bangs. And the rhythm guitarist looked like Beck.

L: They reminded me a lot of the tail end of the Britpop era, like Starsailor, South and Keane.

D: Yeah, I can totally see that. I liked them a lot.

L: What did you think of These United States?

D: I thought their bassist looked like Rich Robinson of the Black Crowes.

D: Whatever you say. Their sound made me think Broken West meets Whiskeytown meets Kings of Leon. In a bar. The kind with peanut shells on the floor.

L: That’s fair. I had never heard of them before, so it was a pleasant surprise.

D: On to Deastro. Or “Day-stro,” as the announcer kept calling him.

L: They totally made up for their amp-blowing technical difficulties by throwing candy out into the crowd. Plus you’re, like, in love with him and want to have his babies.

D: That’s personal between me and Deastro. Besides, I don’t want to have his babies. I want him to father mine. There’s a difference.

L: Thanks for clearing that up, weirdo.

D: I liked the new song he played, “Marriage,” and how he said before they played it, “People rule and people loving each other rules.”

L: Speaking of people loving each other, people were totally going crazy about him. The crowd was very into it.

D: Deastro is amazing. And when I say Deastro, I mean Randy, though the band as a whole is awesome, too. He’s super intense and yet very positive.

L: First of all, you’re talking about the Silent Years keyboardist. And her name’s not Nancy. It’s Cassandra. It was totally awesome that she made cookies.

D: But she looks just like Nancy, a girl we went to high school with!

L: She looks a little like Nancy. But Nancy, then and now, is still a big hair metal fan, is she not?

D: I think so. I’m pretty sure there’s a picture of her with Bret Michaels on her MySpace page. I think Poison is probably a big Silent Years influence, though.

D: I would love that.

L: I love when Josh Epstein got all crazy and jumped on that guy’s shoulders and gallivanted around the room while playing his guitar. That was awesome.

D: It was totally rock ‘n’ roll. Everyone needs a giant friend.

L: Well, everyone needs a giant friend who will let you play guitar on their shoulders.

D: I think that was implied.

L: Their set was really, really good and high energy and you could tell they were just excited and gracious to have such a reception. People seemed really excited.

D: My favorite was when they had folks from the other bands join them for “Open Up Our Eyes.” That was awesome.

L: Josh said they had just gotten back from a little tour and how happy they were to be back playing in Detroit. It’s nice when bands are enthusiastic about their hometowns.

D: It’s hard not to be enthusiastic about Detroit. I mean, there are so many good bands here. Last night was evidence of that. Everyone but These United States was homegrown.

L: This is true. The whole bill was really solid. And there were so many people in the crowd from other bands. I love how the community supports each other.

D: Like Deastro said, “People loving each other rules.” 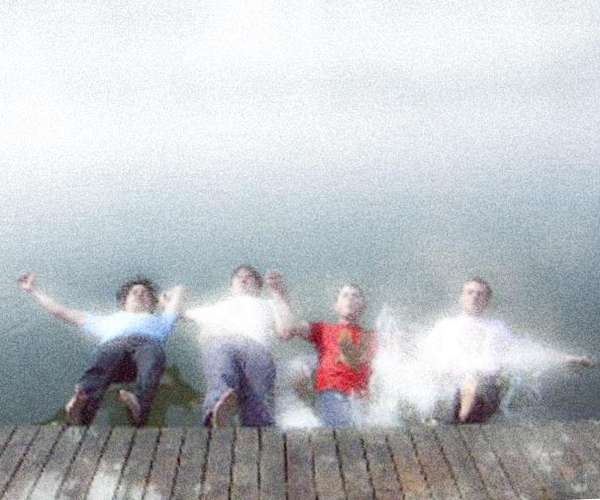