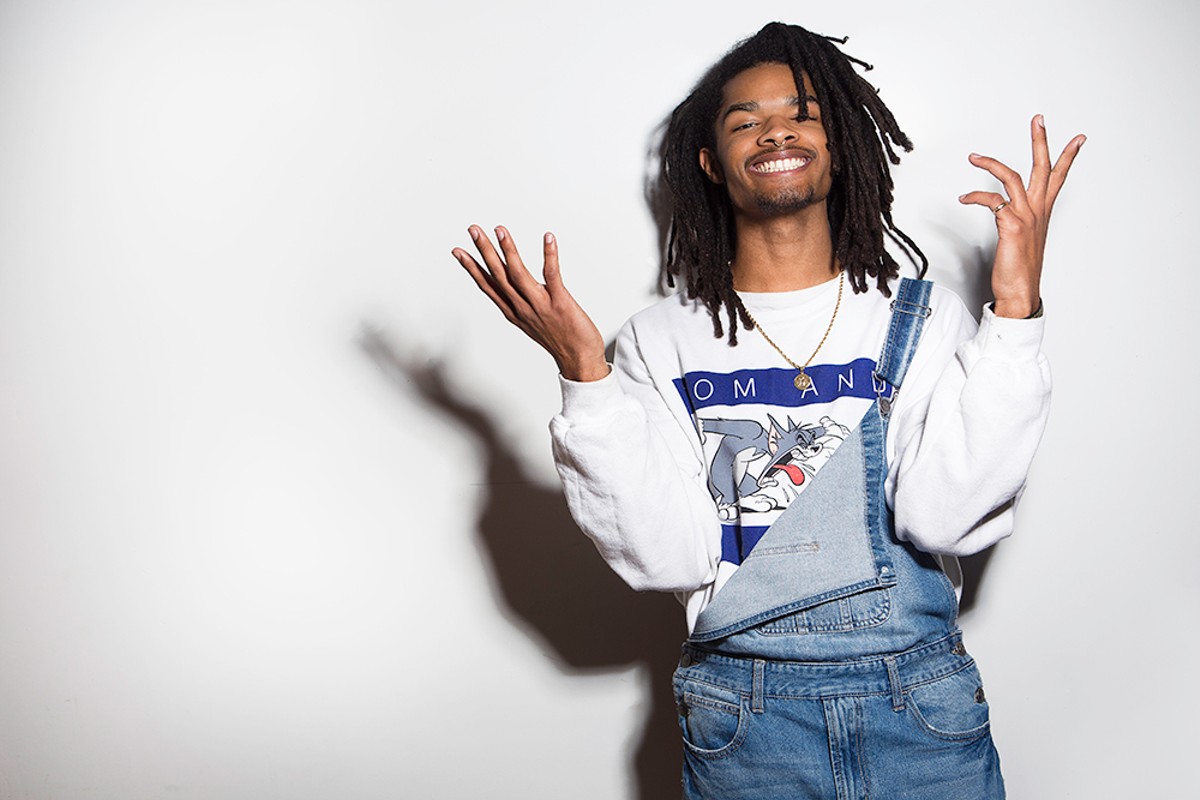 For Curtis Roach, it's simple: You either sink or swim. And so far, Roach is doing more than staying afloat — he's making waves.

Just months before his graduation from Cass Tech, the 19-year-old Detroit rapper independently released his breakthrough mixtape, 2017's Highly Caffeinated — an incredibly well-rounded and seamlessly produced homage to an era of hip-hop that precedes him.

"He's high-pitched like the Pharcyde's Bootie Brown, conscious and self-aware like Common, and dreadlocked like a young Busta Rhymes," Pitchfork's Torii MacAdams wrote of Roach's debut. "Like his open-minded predecessors, he has a purple, starry-eyed streak; he's romantic, optimistic, and prematurely nostalgic."

"I used to watch other people get reviewed," Roach says of the write-up. "It's still hitting me. It's such an accomplishment."

A year after dropping his mixtape, Roach is ready for things to pop off. He is just a week away from his festival debut at Detroit's Mo Pop Festival, where he's sharing a bill with Daniel Caesar, Brockhampton, Vince Staples, and Bon Iver.

A self-described "music-head," Roach has long admired the work and style of rappers Tyler the Creator and Chance the Rapper, and takes notes from rock acts like Jimi Hendrix, Tame Impala, and Rage Against the Machine. Early on though, Roach gravitated toward the classics, admitting to jamming out to Michael Jackson and Stevie Wonder when he was still in diapers. He's got a bit of music in his blood, too — his grandmother was in the R&B group Ruby & the Romantics, whose No. 1 single "Our Day Will Come" would later be famously covered by the late Amy Winehouse. Roach also says that his mother has a Berry Gordy connection, but isn't quite sure how, adding "it might be a Detroit thing."

As far as Detroit things go, it is Roach's love of the late J Dilla that is most apparent when listening to the meditative quality that surrounds Highly Caffeinated.

"J Dilla helped mold me as a person," he says. "I felt like every time I was angry I would listen to his beats to calm me. I would do my homework to his beats. In a lot of ways, Dilla helped me get through school. I had to mature fast because I saw a lot at a young age."

"To think that you could have trust issues at a young age is very heartbreaking but it gives you a reality check very quickly," he says.

Roach taps into an intimacy most artists might package as autobiographical but manages to do so in a universal tone, suggesting that these are shared fears, hopes, and experiences — something only someone so young could portray without ego. On "Carcinogen," Roach confronts the seriousness of his parents' nicotine habit, and on "22" he talks to his late father, referring to himself as a little cub. "I miss the days being simple before we was popping pimples/ We sit and giggle, just clowning in class and breaking pencils/ As time trickled, friendships became brittle," he sings on "Senioritis," tugging on adolescent heartstrings by addressing the inevitable distance between friends after pomp and circumstance.

Roach says he wrote his first rap in fourth grade — though, he confesses, it wasn't very good. But what it did was provide an outlet that would eventually lead to the young creative to pursue poetry and acting. In high school, Roach turned the stage and joined the Mosaic Youth Theatre of Detroit, making his return to music shortly after when he decided to pool his Christmas cash together to buy a microphone so that he and his friends could start recording. Though it just started out as a way to kill time, he quickly learned his friends were not as serious as he was about making music. But Roach was. He hasn't turned back.

"I follow Chance the Rapper's motto of when the time is right, or when the deal is right," he says when asked about label representation and moving forward with his next release. "In the moment, I am in the music zone. I know my time is coming."

Roach doesn't have a website, there's no mention of him on any Wikipedia page, and he's scrambling to get some merch ready for his upcoming festival performance. He dropped out of college last year to pursue music full time. But you can't accuse Roach of being ill-prepared for the future, because he's not much concerned about that. For him, it's about trusting the process and being present.

"I speak stuff into existence every day," he says. "I'm not going to let anyone else's success rush me. At the end of the day, it's just about music. I want to have fun. If it gets to a point where it's not fun for me, I'm going to stop. Growth is more important than success for me. As long as I am growing as an artist, that's my real goal."

Curtis Roach will perform at 1:30 p.m. on Saturday, July 28 on the River Stage at Mo Pop at West Riverfront Park; 1801 W. Jefferson Ave., Detroit; mopopfestival.com; Tickets are $95 for single day and $145 for weekend passes.