Swashbuckling guitarist and founding member of "the greatest rock 'n' roll band in the world" Keith Richards — who allegedly once snorted his dad's ashes and managed to stay completely awake for nine days while recording 1978's Some Girls — recited one of his more quotable quotes for an estimated 40,000 people at Detroit's Ford Field on Monday: "It's good to be anywhere."

And last night, it felt really good to be with the Stones.

Not only was the performance — which marked the 21st Detroit-area concert the band has put on since 1964, when they performed at the former Olympia Stadium — delayed from June 2020, but there's something about watching a band of 70-some-year-olds who, for all intents and purposes, may as well be the last living rock band, do what the Stones have done for six decades: fucking rock the house down. What? Do you actually think Foo Fighters or, like, Imagine Dragons are going to be jumping, jiving, and giving some of the best performances to nearly sold-out crowds when they're almost 100 years old? (Sorry, not sorry, Grohl.)

The band took to a hulking stage with an equally hulky screen set up, which is seemingly modest for a band that once had a mechanical bridge extend into the audience during their Bridges to Babylon tour. Before the band appeared in their respective sequined and, in Ronnie Wood's case, crushed velvet, garb, the evening opened with a video tribute to Charlie Watts, the band's late, longtime drummer who was known as a consummate gentleman and the heartbeat of rock 'n' roll ... as in all of rock 'n' roll. Watts, who died in August, also received a second tribute from sparkling, whirling frontman Mick Jagger (who, yes, folks, can still get it), which inspired an organic "Charlie" chant from the crowd, bringing smiles to Jagger, Richards, and the ever-mischievous Wood, who spent the evening shredding and stalking Jagger like a rock 'n' roll goblin.

Watts's seat currently belongs to Steve Jordan, who has worked with the Stones' since 1986's Dirty Work, a record Watts was largely absent in recording — and a record that is, uh, not very good, and followed some major band-related beefs. But Jordan did a remarkable job taking on some of the most famous songs in history with a restrained ferocity that made the evening feel whole, despite having, well, a massive hole.

The set, however, kicked off with a song that feels very Detroit: "Street Fighting Man."

There was catharsis, electricity, and a bit of weed in the air during the Stones' career-spanning 19-song, 130-minute set, which spared us of 2005's A Bigger Bang (thank you, gents) and denied us of "Ruby Tuesday," "Sweet Virginia," and "Beast of Burden." (It's fine, guys, really.) 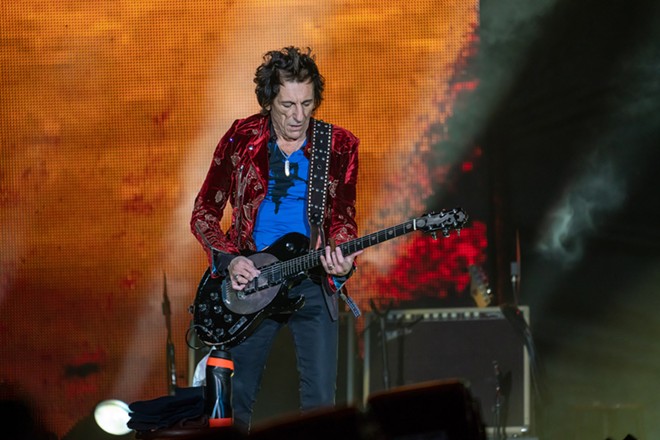 Though the fan-voted "Wild Horses" made the cut, a song that is rightfully beloved, played during maybe one out of every 10 shows, it felt somewhat out of place on Monday for no other reason than it's a song that demands intimacy which is, like, very hard to contend with while in a football stadium. And 1966's "Paint it Black" made a jarring appearance as the oldest song of the set, tying with the band's ode to Motown, a cover of the Temptations "Ain't Too Proud To Beg," which they dusted off for the first time since 2007.

“We always loved Motown,” Jagger declared. “So we can’t come to Detroit and not do a Motown number.”

There was banter, as chameleon Jagger packed a handful of local references into a comedic bit, making a jab at the Detroit Lions and their glowing reputation as number one sucky team always (on their home turf, nonetheless, which the Stones' christened in 2002 and, again in 2006 to perform the Super Bowl XL halftime show). He added that he had gone fowling (he probably didn't), ate both American and Lafayette coney dogs to compare, and finished his early Detroit night with a Boston Cooler and an Advil. Oh, Jagger also asked where the audience hailed from, naming Michigan and Ohio cities only to pose a question that only Detroit could answer: "What up, doe?"

In a hit-packed set, the contest for the best musical moment is a tough one. You've got rousing classic tracks like "Start Me Up," Sympathy for the Devil," and "You Can't Always Get What You Want." But then there's more slinky tracks "Honky Tonk Woman" and "Miss You," on which bassist Darryl Jones shined.

But the most exciting moment came by way of 1969's "Midnight Rambler," which the band served with some special sauce, drawing out the Let It Bleed track for nearly 13-minutes (about six minutes longer than the recorded version). And then there was Sasha Allen, the Stones' backup singer who has been part of the touring band since 2016. Allen sliced through an encore performance of "Gimme Shelter," a song she and Jagger tag-teamed like a soul-filled tug-of-war. (Spoiler alert: Allen won.)

How do you end a Stones' concert? Especially one that felt like a true release and a possible kick-start to the new normal (though we totally understand that the pandemic is raging and "normal" means nothing, but we have to hold onto something, right? It might as well be rock 'n' roll.) If you're the Rolling Stones, you leave them wanting more: you end with "(I Cant' Get No) Satisfaction."

The No Filter Tour, a four-year international run interrupted by the pandemic, has not been, in any way, marketed as a farewell tour (something so many legends of the Stones' age group have decided to embark on as of late), but, with the passing of Watts, it's easy to let your mind go to morbid places. Like sharks, though, the Stones' have to keep moving — otherwise, well, we don't know what happens, because they've never stopped.

And if the half-assed firework display that finalized the show (no shade, but it was very anti-climatic and probably cost a fortune) and the jaded nature in which the audience seemed to pack up and bid the ancient rockers adieu, this wasn't a goodbye goodbye. This was simply an ellipsis tagged onto a lifetime of blood, sweat, tears, blow (like, lots of blow), and a legacy that rakes in an estimated $10 million a show. Plus, the Detroit show was proof that the Rolling Stones, though not at their quote-unquote "prime," they are having the absolute time of their lives, which makes seeing them at any age worth every penny.
Stay connected with Detroit Metro Times. Subscribe to our newsletters, and follow us on Google News, Apple News, Twitter, Facebook, Instagram, or Reddit.