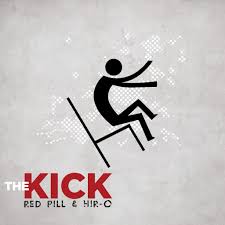 Producer Hir-O surmised (over twitter) that The Kick paid an "homage to the pillars of what we call the Michigan/Detroit vibe."
.
What The Kick came down to, revealed rapper Red Pill was: "we were setting out to prove to the Michigan hip hop scene at large that we were good enough for them to pay attention to..."
~

What The Kick is: the fruition of two years of collaboration, spread over-and-between other projects/releases/day-jobs and family, between local hip-hop heads Red Pill (Chris Orrick) and Hir-O (Omari Hall).

.
Orrick's always been a bit of an outsider, if just merely by geography: raised as a kid in Redford and then spending his high school days in Howell. Unable to get along with the kids out there, he became introverted and invested in his two burgeoning passions at that point, music and writing. Raised on a considerably balanced musical diet, genre-wise, Orrick, or, Red Pill, started gravitating towards hip-hop, noticing "...a definite excitement over the way that rappers were able to convey their thoughts through written rhymes. I wrote a lot and performed in high school in Howell, but after high school I sort of felt like music wasn't a legitimate reality anymore. I had become pretty stagnant and felt defeated by the lack of a scene in Howell as far as hip hop went."

.
Winding up at MSU for school, he soon found himself in the middle of a resurgence of Lansing's hip-hop scene. This was the later 00's and the BLAT! Pack (a Lansing-born hip-hop artists collective spanning producers, emcees and DJs) was getting off the ground and helped him to flourish by showing him " an outlet...a support system" and "...a group of people around me that made me want to be better. It was a lot fun out there."
.
Key for Red Pill was deciding not to worry about whether or not his lyrics were too personal, whether his family might not approve, or broach thoughts, subjects and sensibilities other listeners/rappers might not be so open about. "I've held on to that to the point where I don't even really like writing that isn't personal anymore..."
From his formative years in Lansing, spread out to shows in Ann Arbor, Grand Rapids, Detroit and two trips to SXSW (as well as continuing to collaborate / bond with the BLAT! Pack), Red Pills released his debut Please Tip Your Driver, RAPS and -along with Hir-O, Dream Within a Dream, featuring the tellingly-titled single: We Are Not Like Them.
.
This week, the pair debut their latest The Kick. Here's a video...

Meeting through mutual friends at MSU, Red Pill and Hir-O met at a time when maybe their own tastes/visions didn't align; with Hir-O being known for having a lot of "spacey" beats and Red Pill holding to the notion that hip-hop thrives with soul-sampled, boom-bap styled minimal/electronic sounding production.

Hir-O went to school down in Oberlin Ohio but had come back to the Detroit area at that point to start working seriously and steadily on music.
.
"(Hir-O) came up to do a beat battle at MSU and blew me away," Red Pill recalls. "I knew at that point I had to work with him. We started talking here and there, he sent some stuff and nothing really came of it. Eventually we finally both decided it was time to be serious."
.
They were originally just going to do an EP but decided to go for a full length. "I think the timing worked out well, with both of us having just put out what we considered our first important albums at that point...at least to us, personally, and so we had gotten a little bit of buzz in the local scene, but we were both still very new around town and felt like we had something to prove. The original point of The Kick is that idea: we were setting out to prove to the Michigan hip hop scene at large that we were good enough for them to pay attention to. We've been working on that album now for over two years, it's finally done and will be released on January 15th, 2013. I'll put a link at the end for you to get, I'd really like to hear your thoughts on it."

Dream Within a Dream served as a way to focus their collaboration, with "kind of an all-over-the-place" vibe. Two of its songs have been re-worked and featured now on The Kick. "Kickis an album!" Red Pill said. "A lot of people don't care so much about putting together full, fleshed out albums that really, overall, tell a story, or maintain a story--consistently, throughout, and in some cases I don't even believe that much in it, but for The Kick we felt it was necessary.

With his name recalling the same famously hued capsule offered to Neo by Morpheus in The Matrix, these two recent albums, Dream Within a Dram and The Kick were also inspired by cerebral sci-fi cinema, in this case, Inception. "(It's) not a concept album by any means, but it's conceptual in that it borrowed some themes/ideas/inspiration from the movie. The Kick itself it was "wakes" people up and that's what we wanted to do with this album. There's definitely a story being told, but we wanted to make sure that while there was an overall feeling and vibe, that the songs are strong enough to stand without that vibe on their own."

"My main focus," said Red Pill "is just getting the music out to the people. At the end of the day, as far as I feel right now, I just need to people to hear the music. "
Red Pill on bandcamp
Hir-O on bandcamp
BLAT! Pack
Scroll to read more Music News articles