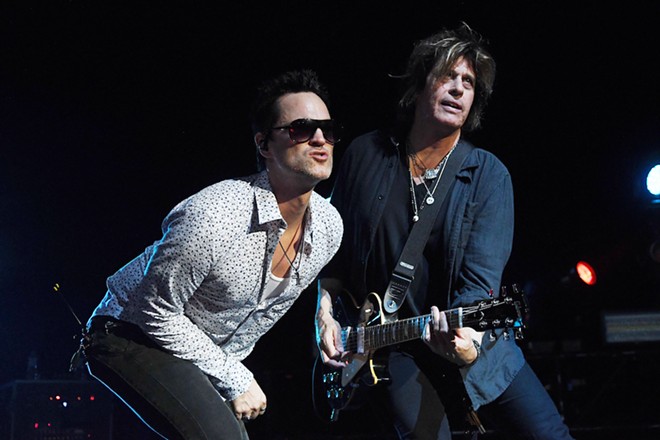 It wouldn't be Royal Oak's Arts, Beats & Eats without a music lineup rooted in '80s, '90s, and 2000s nostalgia, which is exactly what the festival is dishing out for its 2021 iteration.

Arts, Beats & Eats returns at full capacity Sep. 3-6 for its 23rd year. And on Wednesday, organizers announced the majority of the festival's headliners, as well as the more than 200 musical acts who will perform across AB&E's nine stages.

Following Michigan Lottery National Stage performances by the Guess Who and Detroit's Thornetta Davis, Stone Temple Pilots will close out the festival on Friday night. Once led by the late Scott Weiland and, later, replaced by the late Linkin Park frontman Chester Bennington, Michigan native and X-Factor runner-up, Jeff Gutt was elected as frontman following Bennington's suicide in 2017. He also performed at AB&E in 2014 as a solo act.

On Saturday, the main stage will see performances by Beatlemania Live!, "We Built This City" arena rockers Starship, and headliners Neon Trees, who scored success with their radio-hyped first single "Animal" in 2010.

Though Sunday night's headliner has yet to be announced, guests who like country and blues will likely be satisfied with the lineup which includes Laith Al-Saadi, Mac Watts, Frank Ray, and Justin Moore.

To close out the main stage, AB&E has enlisted '90s hit-makers Gin Blossoms who will perform just before headliner and ex-husband to the late Whitney Houston, Bobby Brown, who, according to his lengthy Wikipedia page, hasn't released new music since 2012. But, hey, that's his prerogative.

Per the Detroit Free Press, AB&E organizers have committed to increasing payments to local musicians to 10%, just one of several festival changes made this year. It was announced last month that the festival has ditched the old food and drink ticketing system, which has been in place since 1998.

Previously, attendees were required to purchase a fixed number of tickets to be exchanged for food and drink at the festival's many vendors. Of course, this meant lots of unused tickets. But this year, in an effort to reduce wait times and contact points, attendees can simply buy food and drink directly from the festivals' 50-plus participating vendors via cash and credit card.

Admission to AB&E is free before 5 p.m. on Friday, Sep. 3, and $10 after. On Saturday, Sunday, and Monday, folks can enjoy the festival for $5 before 3 p.m. and $10 after. As with years previous, AB&E is once again teaming up with Gleaners Community Food Bank to offer guests $5 off admission by donating three or more canned goods at a participating Flagstar Bank location.

For all the info on all of the arts, beats, and eats, visit artsbeatseats.com.