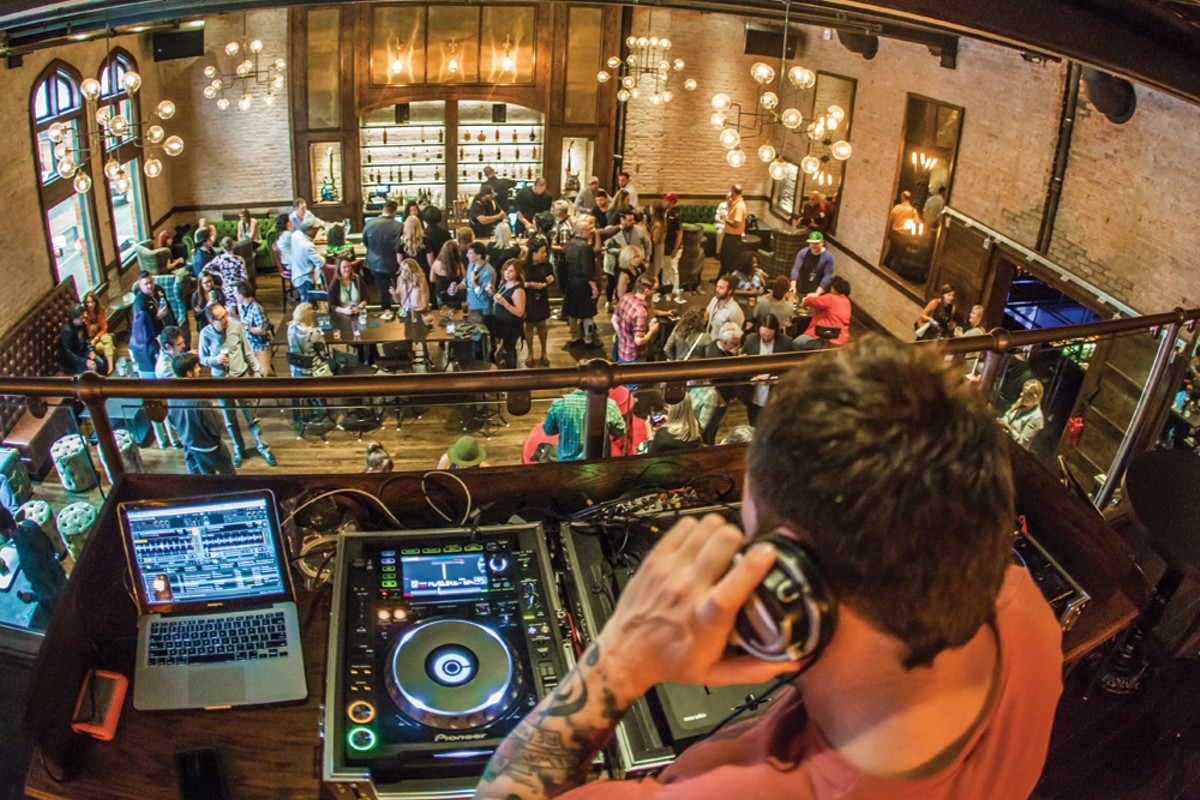 Opening night at the Society Room. Photo by Marc Nader.

A Detroit cultural and architectural gem, the concert venue St. Andrew's Hall has opened a gorgeous new lounge space: the Society Room. The name pays homage to a time when the venue headquartered the Saint Andrew's Society of Detroit, which preserved and celebrated Scottish heritage.

The renovated space was formerly known as the Burns Room, which served as an artist green room and the site of the famous Three Floors of Fun night, where crowds would jam to techno, rock, and hip-hop. The Burns Room was that high school gym you loved because it was where all the dances were held — a serviceable place with a bar (assuming it was a really progressive high school), ceiling lights, and a disco ball. The changes were made because the Burns Room was underutilized, says Saint Andrew's Hall marketing manager Jess Thibodeau.

Talk about an upgrade. The Society Room isn't a small cosmetic change; it's a $500,000 face-lift funded by Live Nation, which owns the venue. Original flooring, exposed bricks, and 100-year-old windows boldly summon the past. If you didn't know any better, you might think it was a graft from the Country Club of Detroit. It's an elegant backdrop to the diverse musical acts that walk across the stage below, from post-hardcore and noise rock to reggae and West Coast rap.

The changes are in service of a dedicated fan base, Thibodeau tells MT.

"It's putting a little love into the venue to help improve the experience of the fans and still maintain the integrity, character, and legacy of the Detroit music scene," he says.

Additional renovations include a new box office with extended hours, renovated restrooms on the main lobby floor (which has new concrete), restored exterior brick and limestone, newly painted walls and detail work, and the restoration of the main hall stage proscenium. The chairs and sofas of the Society Room invite you to fall into them and stay there. If by some chance you become a successful musician and get to play the venue, you'll reap the benefits of its new green rooms beneath the main lobby. Most of us will just have to imagine ourselves watching the flat-screen TV in the headliner's room or making use of a nice private bathroom.

The Society Room bar serves specialty craft beers and other options that aren't available at the Shelter, the underground floor that's especially popular among DJs and is known as one of Eminem's first stomping grounds.

Patrons with special tickets are able to watch shows in the main hall from the balcony of the Society Room. The space can also be used for private events and special programming.

Whether Live Nation was conscious of it or not, these renovations help make the venue relevant to the life of the city. It makes sense that these kinds of storied places — theaters, clubs, concert halls, and the like — are as subject to change as the cities they call home. To avoid being stale, St. Andrew's has adopted its old spirit.