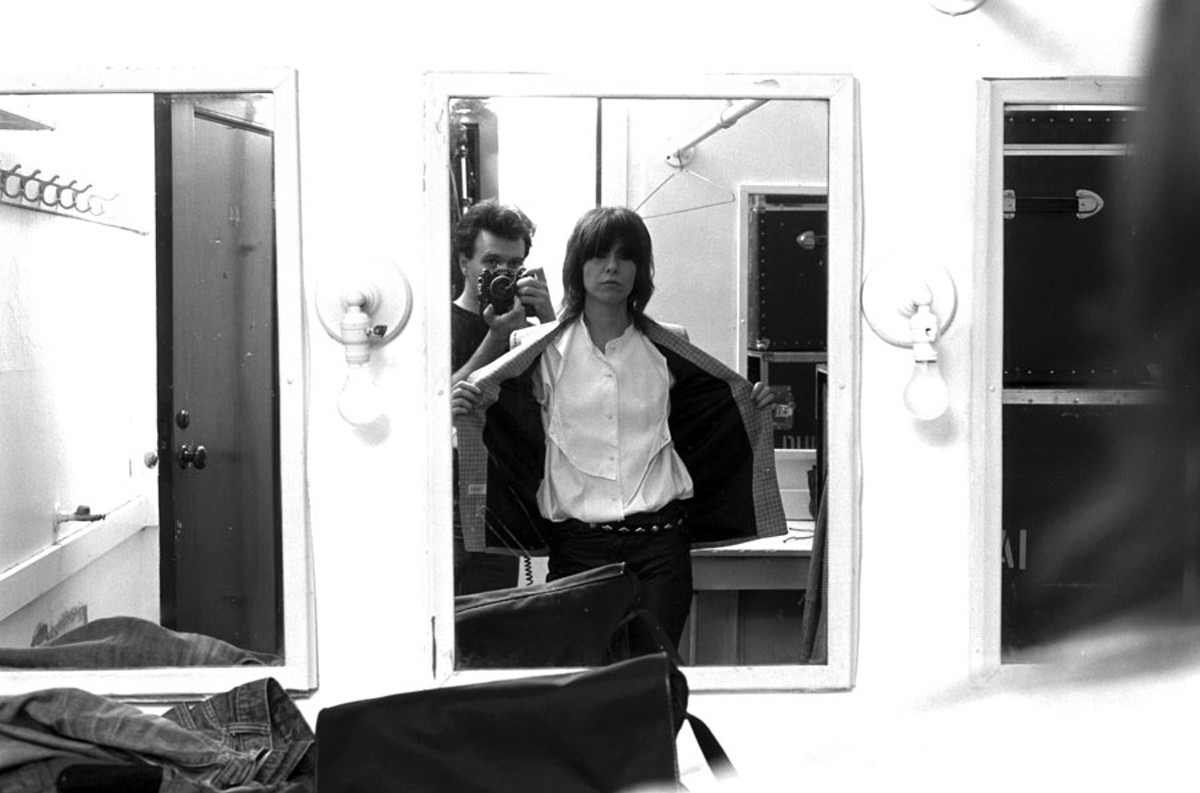 Matheu was born on Detroit's northwest side in 1955, the youngest of four children. He began his photo career as a teenager during the high-energy Motor City scene of the late 1960s. His early photos of the Stooges and the MC5 showcased a raw talent that, once honed, would make him an in-demand shooter.

"His work reflects the essence of Detroit and mirrors the raw and gritty music that comes from our city," says mega-producer and fellow Detroiter Don Was. "He was never an airbrush kind of guy and he never needed darkroom hocus pocus to enable his photos to stand on their own. He had the eye and the mastery of his tools to quickly determine the nitty gritty of the situation and capture it squarely in his lens. That's why his archives contain so many iconic images."

Matheu's celebrated images were published widely, on album covers and in outlets that included CREEM, Rolling Stone, Playboy, Life, Time, Mojo, Melody Maker, Harper's, Vogue, and The Los Angeles Times. He co-edited the anthology CREEM: America's Only Rock 'n' Roll Magazine (Collins) with this author, and he wrote the book The Stooges: The Authorized and Illustrated Story (Abrams), which was the pinnacle of his longstanding association with the band.

"He was a kind of an extra Stooge. I dunno, the fifth Stooge, the seventh Stooge? The ninth Stooge?" Iggy Pop says. "Anyway, he showed up at the studio with Scott Asheton one day in '06, and the next thing I knew, we were doing a Stooges photo book. And it was a hell of a good photo history of what the band really was about, because Bob understood us, and who we were. Where we were coming from."

"Bob played an important role as a photographer and friend of the Stooges, from the early days through both reunions," Williamson says. "Personally, he was always there when I needed photographs or just an ear to listen to and rally my spirits."

Matheu prided himself on being a talent scout as well as a photographer. His eye for talent allowed him to catch early shots of Midwest breakouts like Devo, Was (Not Was), and the Romantics.

"When I met Bob in 1981, it was clear that he was different from all the other photographers we encountered," Was says. "He possessed the swagger, irreverence, rebelliousness, and undeniable artistic talent that distinguishes the greatest of rock 'n' roll musicians — his instrument of choice just happened to be a camera rather than a guitar."

Matheu maintained long professional associations with a variety of artists, including the Pretenders, Cheap Trick, Tom Petty, the Stray Cats, and Brian Wilson. Along with his photographic skills, Matheu was a rock archivist and historian. His deep knowledge was often tapped, including recent photo research work on an MC5 box set and on Wayne Kramer's autobiography The Hard Stuff.

"Robert was a homeboy and a friend. He will be sorely missed," Kramer says.

Matheu's breathtaking photographic talent was sometimes obscured by his outlaw persona. Roxy Music's "Editions of You" was one of his main musical touchstones. As a photographer, the line about "waiting for the perfect view" was professionally resonant. But the line "stay cool is still the main rule" gave him a mission statement and personal mantra. He operated with a seductive audacity, and the air around him felt electric. Like Shakespeare's Puck, he brought memorable mischief into every situation. He relished winding people up, and his charm made him often — though not always — able to get away with it.

"He and the Ashetons used to like to sneak off and smoke weed and giggle, when they thought I wouldn't notice," Iggy remembers. "This endearing behavior was part of a genuine, scrappy artist and photographer."

Music journalist Dave DiMartino met Matheu the first day he reported for work at CREEM in Detroit in 1979 and maintained his friendship with him after moving to Los Angeles in 1986 and the years that followed. "Bob was a delightful, warm-hearted guy with a great sense of humor," says DiMartino. "His association with CREEM was a boon to us both in terms of his great photography — he really had an incredible photographic eye — and his character. Everybody loved him, especially the musicians he shot, and he helped lay the groundwork for our long-term relationships with many of them. There was no one else like him."

Nikki Corvette — a fellow Detroiter who relocated to Hollywood around the same time in the early 1980s — remembers Matheu as "the ultimate Rat Pack cool guy who knew everybody, got invited to the best parties, and was always on the VIP list." She added: "He was everybody's friend, including mine, and irreplaceable to all of us who knew him."

Eddie Baranek from the Sights reminisces about the time Matheu sidled up to him at a bar at SXSW and got him into a guest-list only reception to hobnob with Pete Townsend, Jimmie Vaughn, Ian McLagan, Joe Walsh, Dave Teegarden, and a host of other VIPs. "He was crass and funny. I loved him immediately," Baranek remembers. "Robert pissed Pete off, and he loved showing me that. I loved him for it. Such a little shitstarter."

Matheu got away with things, in part, because he loved deeply and easily. He was generous with his time and knowledge and contacts. He enjoyed championing new talent (including this author) and bringing people together.

Matheu's world changed in 2002 with the birth of his eldest daughter, Ruby, who was quickly followed by sisters Rose and Veronica. His daughters were the center of his world. Go-Go's bassist Kathy Valentine, who had a long friendship with Matheu, says she loved watching him be a dad.

"I'd always liked him and enjoyed his good-humored, easygoing nature, but it was the years of family-oriented time we spent together that I really saw him at his best," Valentine says. "We started our families within months of each other, and shared that early parenting experience together."

"Every Christmas I got a super bitchin' Christmas card from Bob and his family," Iggy remembers. "It always had a picture of Bob as Santa Claus with his beautiful wife and darling girls dressed in kind. He was a real sweetie pie, and I remember him best this way."

Matheu is survived by his wife Sheryl, daughters Ruby, Rose, and Veronica, sister Dolores and brother Ronald. He was preceded in death by his parents Anthony and Ernestina and sister Joanne. He was buried in Hollywood Forever cemetery.

Brian J. Bowe is a journalism professor who lives in Bellingham, Wash. He was a frequent collaborator with and close friend of Robert Matheu, co-editing the anthology CREEM: America's Only Rock 'n' Roll Magazine.

Brian J. Bowe is a freelance journalist and a journalism professor at Western Washington University. He was the recipient of a 2017 research fellowship from the Rock and Roll Hall of Fame Foundation to conduct archival research on the MC5.
More
Scroll to read more Local Music articles
Join the Metro Times Press Club