Raph_PH, Flickr Creative Commons
Thom Yorke performs with his band The Smile in May, 2022.

For whatever reason, English rock band Radiohead avoided playing in the Detroit area for many years, finally following a 1997 show at what is now the Fillmore with a concert at the former Palace of Auburn Hills in 2012.

If the band ever had a boycott against Detroit, apparently they're officially over it. A new side project called The Smile — which features Radiohead's Thom Yorke and Jonny Greenwood, along with jazz drummer Tom Skinner — has now announced a tour with a stop in the Motor City.

The band will perform on Nov. 28 at Detroit's Masonic Temple Theatre. Tickets go on sale at 10 a.m. on Friday on axs.com.

The Smile released its debut LP, A Light for Attracting Attention, last month to critical acclaim.

The reason for Radiohead's years of skipping Detroit was never made clear, leading to fan rumors that the band must have had a bad experience here, like perhaps a tour bus break-in. While reporting attributed to an anonymous source suggested that the reason for the boycott was that the band simply could not find a suitable venue in the Detroit area without heavy corporate branding, that doesn't sound quite right, either. Radiohead returned to Detroit again in 2018 for a concert at Little Caesars Arena, which is plastered in logos, including the pizza company's mascot.

Yorke returned to Detroit again in 2018 as a solo artist at the Masonic Temple Theatre. Regardless of the reason for the absence, we're just glad Yorke and company appear to be cool with Detroit now. 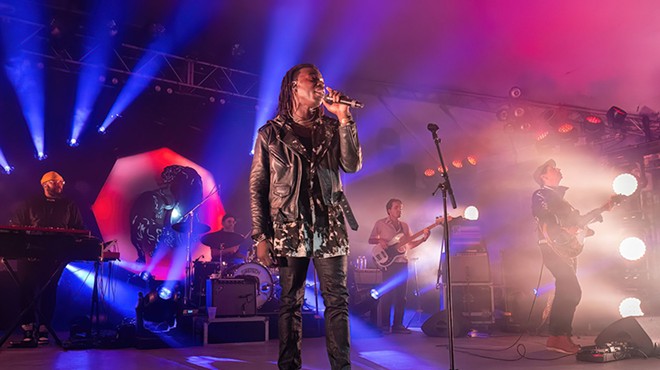 Why does it feel like so many tours skip Detroit? It’s complicated.

Leyland "Lee" DeVito grew up in the suburbs of Detroit, where he read Metro Times religiously due to teenaged-induced boredom. He became a contributing writer for Metro Times in 2009, and Editor in Chief in 2016. In addition to writing, he also supplies occasional illustrations. His writing has been published...
More
Scroll to read more Concert Announcements articles
Join the Metro Times Press Club