Kenny Rogers teaches guitar: Know when to walk away, know when to strum. 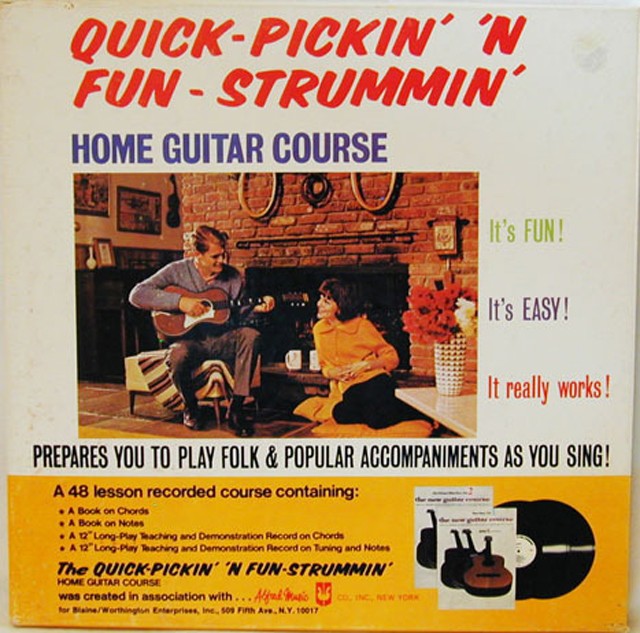 Years ago, before he shape-shifted from groggy, over-30 hippie to the king of slowpoke storysingin', "The Gambler" was a TV pitchman for this two-record gee-tar primer.

"Hi, this is Kenny Rogers, and I feel like singing a sad song for those old guitars collecting dust in the closet," his cranky spiel began. It's only fitting karmic closure that I should find this album collecting dust at a Goodwill alongside equally neglected copies of Eyes That See in the Dark and Share Your Love. This album will never teach you how playing "Blue Tail Fly" expertly translates into a chain of rotisserie chicken shacks with your mug plastered all over them.

No, fellas (and clearly this tutorial wasn't fixin' to churn out any more Joanie Baez troublemakers), this course was only created so that fireplace lotharios could get proficient enough at playing "Red River Valley" so they could take turns seducin' Thelma Lou after she finishes her shift at the Quickie Mart.

Look at her. Look at her real good. If you want that specific strand of womanseed that demands to see some minimal display of six-string acumen before she'll allow any fun strumming on her hoo-hahs, you'd better be prepared to follow the advice of the bold type inserted at the end of every paragraph in the liner notes (probably at the insistence of the legal department) and practice as much as possible! Your results in 2011 may vary.