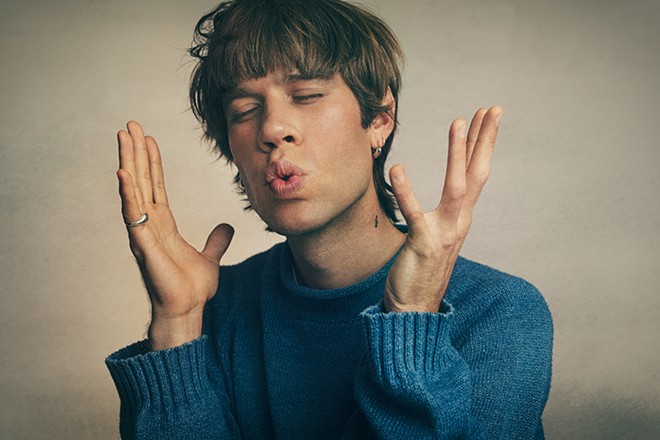 Aaron Maine, who performs as Porches, grew up listening to the Strokes and Nirvana. He says that these bands are the first ones he sought out on his own, bussing into the city from the NYC suburb he grew up in to get a dose of the rock ’n’ roll lifestyle. It makes sense, then, that during lockdown — a time where there wasn’t a shred of certainty to hold on to — Maine returned to the mainstays that raised him.

“That’s how I learned how to play music,” he says. “Learning, like, the Strokes, and Nirvana, and Ramones songs … I guess being in this lockdown … I was just drawn to return to something that felt like I kind of knew how to do and then revisit it a decade later.”

While writing his latest record, All Day Gentle Hold, Maine channels his earliest influences without veering away from his artistic core. He accomplishes this through steady strumming, straightforward lyrics, and playful guitar melodies accompanied by his own wry humor and subtle nihilism. We find the latter in lyrics like, “I wake up/ like a big black hole/ put a coffee in me/ light one up and leave everybody alone” — ones that are at once deeply relatable, slightly depressing, and very much a glimpse into Maine’s daily reality.

Although he contains the air of mystery and undeniable talent of a rockstar, it seems Maine’s daily schedule is comparable to your average work-from-home baddie. The only difference is while a lot of us wake up, caffeinate, and start sending off our “best regards,” Maine pulls up a chair to his home studio across the room and writes music for eight to nine hours.

“It’s sort of like the only thing that I do,” he explains. “At the end of the day, I don’t really travel or have many other hobbies besides making music … it’s kind of obsessive, it’s not all about career or creating work. A lot of it is just about the motion of creating something — [that’s what] I’m totally addicted to. It makes me feel kind of peaceful, a lot of the time. Sometimes it makes me feel absolutely insane.”

In fact, touring is pretty much the only time that Maine carves out to travel, which is one of the reasons he’s excited about this one. “I didn’t realize how important it was to me as far as solidifying this cycle of creating stuff,” he says. “Like you’re 99% in isolation already and you read comments or whatever. I try not to read [any] press about it. It feels kinda crazy until you have that physical experience of being in a room with people and it sort of all makes sense, like, ‘I am doing something and creating something.’ It’s not all for myself. A large part of it is to have people enjoy it.’”

“A lot of it is just about the motion of creating something — [that’s what] I’m totally addicted to. It makes me feel kind of peaceful, a lot of the time. Sometimes it makes me feel absolutely insane.”

With songs like “Okay,” “I Miss That,” and “Lately” that feel like they were born to be screamed in a crowd, it’s unlikely that Porches fans will be disappointed. Accessible songwriting coupled with stripped-down instrumentation, mostly led by guitar and drums, makes All Day Gentle Hold Porches’ most “show-friendly” record, and he knows that.

“I feel, like, insanely excited to finally get to play these songs,” says Maine. “Making this past record especially, I was kind of fantasizing about what it would be like to play these songs in a room full of people and was, like, making decisions based on what I would imagine would feel best plugging in and playing to a crowd of people singing along.”