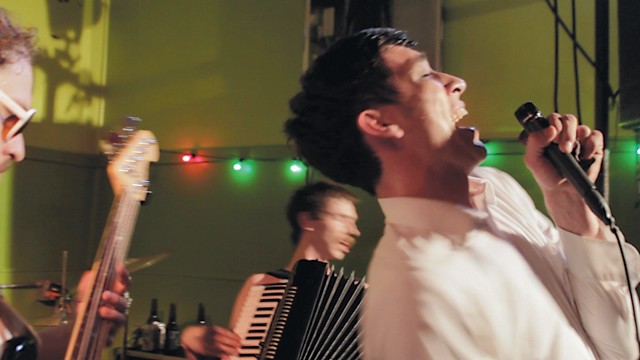 A disco beat under a funky space-rock guitar and a grooving bass with an accordion's old-world-wheeze. Thus forms the dance-rock of the quintet Pink Lightning — galvanized by a suspender-sportin' frontman. After a full year playing, these former Eastern Market buskers are famous here for their live shows and mix of funk, Cuban, surf or Zappa.

MT: PL's known for great energy, costumes, dance rhythms, and your accordion. What's this band not yet known for?

Leo McWilliams: We take a lot of risks on stage. We baptize songs by fire. We've melted down a few times and some of those times have garnered us fans and sometimes enemies. Live music is a fully immersive experience; that's why we dress up. Once I played a show in my work clothes from that day; it wasn't the same. One time, Everette and I wore a full body spandex suit, for a show in Romeo. The crowd was peering at us hesitantly; it was hilarious. How we look is an important aspect of performance. I don't miss an opportunity to entertain someone if I can help it.

MT: Matt, can you make sense of that sound? And is it true you almost got into a bar fight with Kid Rock?

Matt Paw: I'd rather just let that be a telephone-line of a tall tale; basically, he was being drunk, I was being drunk, comments were exchanged. I don't want PL to be known as the band who kicked Kid Rock's ass, but rather — a band who kicked everyone's ass. Anyways, I don't know our formula, nor do I wish to understand it, for then it may be destroyed.

MT: Can you talk about that, Neal, and whether you'd correct me if I said: dance-rock?

Neal Parks: With PL, I love how open we are to all styles of music, gypsy, Irish, funk, dance, pop, or rock, hip hop, even blues. Depending on how we feel at practice, different sounds come from different players and I just try to tie it all together with an appropriate beat; something people can get down to; simplified, but yet, dynamic enough to keep myself entertained.

MT: Everette, on entertaining live shows, what gets into you guys, besides beer, maybe?

Everette Rinehart: I've played in a lot of different bands, always bass, and although there was certain songs I'd prefer, I have truly loved all of the music. It's funny you mention the beer; I had to cut back considerably after getting a big-boy job where I wake up early. Beer's not a big part of the show; we really just try to have fun. That said, I enjoy drinking it.